As I write this, the Doctor Who fandom will probably be losing its collective mind over the announcement that Jodie Whittaker has been named as the 13th Doctor. This will be heralded as some landmark in television when in reality, all that has happened in that an actor has filled a role. Quite frankly I think that this is one of the most spoilery of spoilers because the next episode won't come out until Boxing Day and if filming was to start tomorrow, then the next series wouldn't air until January of 2018 at the earliest. Keeping everyone in suspense for six months would have been a good thing but I suppose that the BBC is counting on the fact that there would have been leaks from the set and so this is flood mitigation.

Of course this just leaves the fandom to come up with insane theories and counter theories, which given the nature of the show, might eventually find their way into it. Indeed the Twelfth Doctor himself, Peter Capaldi, is something of an ascended fanboy; having letters to the editor in the Doctor Who magazine published.

Naturally, I have my own insane theories, one of which is being proven all the more. That is that, all television shows with any actor from Doctor Who are in fact Doctor Who stories; I have expounded upon this before (See Horse 2294). One of the rather amusing consequences of announcing Jodie Whittaker as the 13th Doctor is that the TV series "Broadchurch" ceases to be just a 10th Doctor story, with the Doctor assuming an alias with the companion of DS Ellie Miller but it becomes a 10th and 13th Doctor story with Beth Latimer suffering the trauma of losing her son and that's the reason why the 10th Doctor tangles up the timeline and investigates. If time is a big ball of wibbly-wobbly timey-wimey stuff, then that also explains why Rory poses as a church minister. 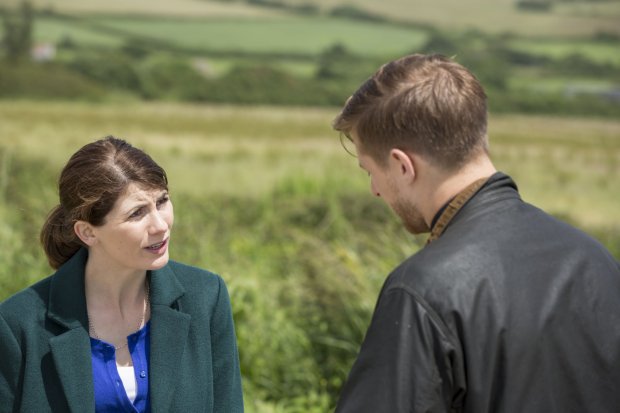 - Rory poses as a Minister; being quizzed by the 13th Doctor.

This also opens up an unexpected line of insane theory. If Beth Latimer is the 13th Doctor, then we know who the Doctor's children are. If we know who the Doctor's children are, then we can guess who the parents of Susan Foreman are, and that would explain why she as the Doctor's grandaughter ended up in the TARDIS before the very​ first episode of "An Unearthly Child" in 1963. Presumably Susan is Chloe Latimer's daughter because she who must have been married at some point in the past's future. Of course if they end up commissioning a fourth series of Broadchurch with Peter Capaldi in it, then this insane theory gets triple locked down.

Invariably the announcement of a new Doctor also means that there will be a companion who will be cast and I suspect that director Chris Chibnall will want to install a rather dim witted young man in the role. It would make sense for the power dynamic to be exactly gender opposite because in this case the companion needs to be a great steaming pillock so that the Doctor can be shown to be brilliant. I am rather annoyed that Bill was killed off in the series just been but this does mean that there is an entirely clean slate to work with.
I have also heard a rumour that the TARDIS console room is going to get a refresh and I hope that they go for something with panelled wall and circles all over them like the 3rd and 4th Doctors had, or build a console room which is cluttered with half finished polymath experiments and stacks of broken equipment and haphazard piles of books.

I think that the announcement of Jodie Whittaker as the 13th Doctor is perfectly fine and that The Doctor is a woman is almost a non event. What is of greater importance is that if the publicity shots are anything to go by, the Doctor is a ginger; which has been a long standing complaint of the Doctor.
Posted by Rollo at 10:10