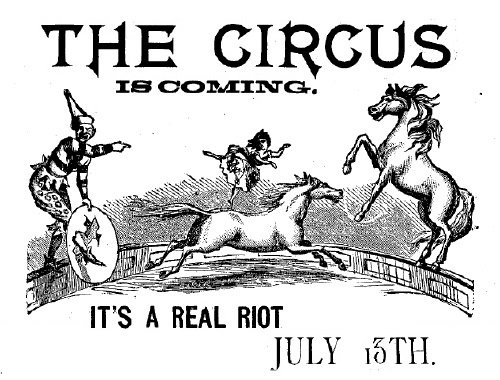 On the north-western shore of Lake Ontario stands the City of Toronto. Toronto, the Good. Toronto: Canada's largest city, the fourth largest in North America, and the site of the 1855 Clown Riot.
Yes, you heard that correctly, Clown Riot.

In the summer of 1855, the Star Troupe Menagerie And Circus of one S.B. Howes was in the good city of Toronto, to display the usual sorts of circus attractions. Under the Big Top was the usual fare of lion taming, elephant dancing, horse riding, acrobats, and yes even clowns... especially the clowns.
Being in the middle of the summer and in the days before television and the cinema, the circus being in town was a big deal and so everyone who was anyone was there. The circus did so well that they'd sold out all the tickets on the opening night of July 12 and hoped to do so for the rest of the run.
Of course where you have a city on a lake, you have public houses and taverns, more than 150 of those, and you also have houses of ill-repute. It just so happens that one evening after the employees of the Star Troupe Menagerie & Circus had finished for the night, they went out to see the attractions that the City of Toronto had to offer.

Some of the clowns ended up in an establishment which was frequented by the local fire department and it seems that fire-fighters, just didn't see the joke of having a whole bunch of clowns suddenly show up.
Nobody knows how the fight started but in one particular house of ill-repute, the clowns and the fire-fighters closed ranks. The clowns though, were able to fight so well that the fire-fighters got kicked out of their usual haunt and this is where things took a turn for the worse.
It seems that the fire-fighters were annoyed at not being able to make use of their usual entertainments of dubious virtue and having just been beaten in a fight on their own patch of turf, they were out for full on revenge.

On Friday 13th of July 1855, the fire-fighters apparently got in touch with local members of the Orangemen. This had become a de facto Protestant v Catholic argument and the combined forces the Toronto Hook & Ladder crew and Orange order, set about with axes and torches, pulling down tents and sitting the Big Top on fire.
By now a full on pitched battle was in full swing; it took the Mayor of Toronto, to finally disperse the argument and convince the circus to leave town.

Naturally, the police who came and investigated proceedings, failed to identify anyone and nobody in the fire brigade or the Orange Order was ever charged. This caused a public outrage and it did eventually bring about a change in city policing some three years later; which also included some formal training for police officers where formerly there was none at all.
Inadvertently, an actual clown riot, changed the face of Canadian policing forever and that is nothing to be laughed at.
Posted by Rollo at 07:17