One of the great ironies about the only national newspaper in Australia being called The Australian, is that its founder and proprietor in chief, Rupert Murdoch, willingly gave up his Australian citizenship for business reasons. Another great irony of the company News Corp Australia is that by its own admission, it isn't really a news organisation but an editorial company.

http://www.newscorpaustralia.com/brand/australian
The Australian’s purpose remains the same as it has been since its launch in 1964. The Australian's aim is to lead the independent thinking, essential for the further advancement of our country and the Australian business environment.
- News Corp website as at 21st Oct 2017

If you read yesterday's Australian, you'd be left wondering what the actual aim was of the newspaper. One can only assume that the further advancement of our country involves the ridicule of another, when the results of the process of forming government don't go as you'd hoped. 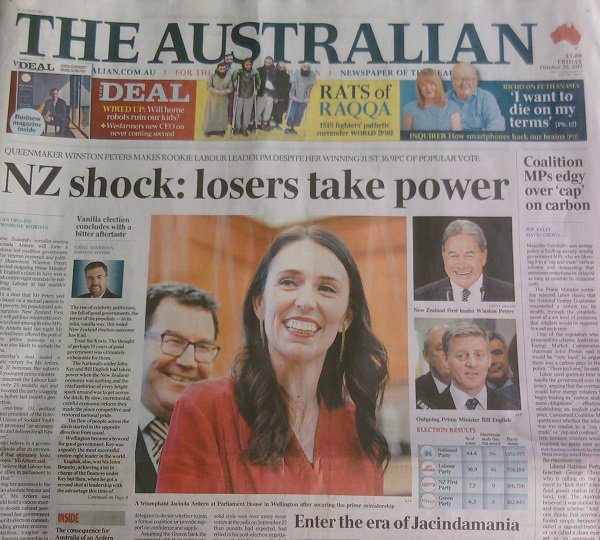 On the 23rd of September, the New Zealand general election returned a hung parliament. This means that no party won enough seats to form a majority in its own right and that whoever could negotiate to form the biggest coalition of a sufficient number of seats, would form government. That process after a considerable number of meetings took 26 days and Labour, NZ First and the Greens were able to form that coalition. That process seems completely alien to The Australian and you'd think after reading their news reportage, that a horrible travesty has been committed. My reading of The Australian leads me to believe that either nobody who writes for the newspaper has even a rudimentary understanding of how a NZ Election or the NZ Parliament operates, has ever studied basic political science or taken a civics class, or perhaps more worryingly are just plain scurrilous knaves.

This was the opening paragraph from the article on the front page entitled "NZ shock: losers take power". There is already something wrong with this factually in just the headline. Exactly how has someone "lost" the election if they have formed a government? Usually you would call the ability to form government a win but not in the eyes of the Australian apparently.

The article then goes on to say that outgoing Prime Minister Bill English claims to have won a mandate to govern by outpolling Labour at last month’s election. How? Government in a parliamentary democracy is formed out of a majority of members on the floor of the parliament. By my calculations, the National Party of which Bill English is the leader won 44.45% of the vote. Collectively, Labour, NZ First and the Greens won 50.36% of the vote; hence the reason why in a proportionally repesented parliament, they won 50.83% of the seats. I assume that the Australian is able to stand by this statement because they can fall back on the opinion that Bill English made the claim and not them.

This article then goes on to state that:

http://www.theaustralian.com.au/news/world/new-zealand-shock-losers-labour-and-nz-first-take-power/news-story/78dfb678806601e8387b2f6c1be3b3ac
Mr Peters said that under New Zealand’s mixed-member proportional electoral system — in which voters elect their preferred candidate for their electorate but also for a preferred party, which produces the final make-up of parliament on a proportional basis — Mr English did not have an automatic right to form government.
- Ean Higgins and Primrose Riordan, The Australian, 20th Oct 2017

Perhaps I need to reiterate this. Government in a parliamentary democracy is formed out of a majority of members on the floor of the parliament; therefore nobody ever has an automatic right to form government. I would hate to think what The Australian thinks of the German Bundestag which uses almost the same system with variations in counting, and where there are seven parties on the floor.

The editorial which sits buried all the way on page 13 and which attributes no credits for authorship to it, probably on the basis of cowardice on the part of The Australian, has this to say:

http://www.theaustralian.com.au/opinion/editorials/nz-labours-pyrrhic-victory/news-story/a063dfb68fedf0eacc40797134bd213f&memtype=anonymous
Winston Peters' decision to throw in his lot with Labour to form New Zealand's new government makes a mockery of last month's election. It flies in the face of the convention Mr Peters adhered to in his role as kingmaker under the complex mixed-member proportional electoral system on two previous occasions when he pledged the support of his New Zealand First Party to the party that won the most votes, ensuring stable government.
- Editorial, The Australian, 20th Oct 2017

As for the mixed-member proportional electoral system, is it really that complex?
You vote for a party and your local electorate. Basically if a party wins say 24% of the vote, they're entitled to 24% of the seats, which is 28 of 120. They fill those seats by whoever won the most number of votes in electorates, then the rest of the seats are filled down the list. If a party more electorates than it has party seats, it still gets them as overhang seats. How is that complex? I've been able to describe it in one paragraph. How come The Australian which supposedly has political journalists who have been there for thirty years or more, can't work that out?

http://www.theaustralian.com.au/opinion/columnists/greg-sheridan/vanilla-nz-election-concludes-with-a-bitter-aftertaste/news-story/f3f1665bdc097dfef913f6745de5dbca
The thought of perhaps 10 years of good government was ultimately unbearable for them.
- Greg Sheridan, The Australian, 20th Oct 2017

Who's to say that the new government which has been formed won't be good government. Seriously? What's going on here? For a publication whose supposed aim is to lead independent thinking, they've done an awful lot of value judging. Just because your team hasn't won doesn't make the process illegimate; just because you can be bothered to understand the process doesn't make it illegimate either.

Really the only genuinely truthful part of the reportage in The Australian about the NZ Election and Jacinda Arden becoming the next NZ Prime Minister was the headline for Greg Sheridan's article which was "Vanilla election concludes with a bitter aftertaste". That bitter aftertaste is The Australian's reportage which is like indigestible right-wing baby formula which should be spat out at the first available opportunity.
Posted by Rollo at 22:10