John Pemberton's​ invention of 1886 of Coca-Cola, came just before what has sometimes been called "the great binge", which was that period in history where hard drugs were readily obtainable and unregulated. As a result, everyone who had access to free money, was pretty well much on anything that they could lay their hands on. Queen Victoria was said to have had a laudenum habit, the UK went to war with China and won Hong Kong as a result of the Opium Wars and even in literature, the great fictional detective Sherlock Holmes was known for taking Heroin. Coca-Cola like so many of the tonics of the day, also originally contained a hard drug; specifically cocaine. In due time, the cocaine would be taken out.
Coca-Cola became the de facto drink of World War Two when it was made available to US servicemen abroad at the price of 2 cents a bottle, which is what they could get it for back home. For the latter half of the twentieth century, Coca-Cola reigned as the ubiquitous drink of many parties and summers, and for a short time became the synonymous with a marketing war with Pepsi.
In the twenty-first century, it has lost its place as the unchallenged market leader when it comes to fizzy diabetes inducing drinks, as we've entered another kind of unregulated "binge" of so-called "energy drinks"; the most visibly famous being Red Bull. This has meant that the people at Coca-Cola have had to come up with something different and new and that's where this fits in. 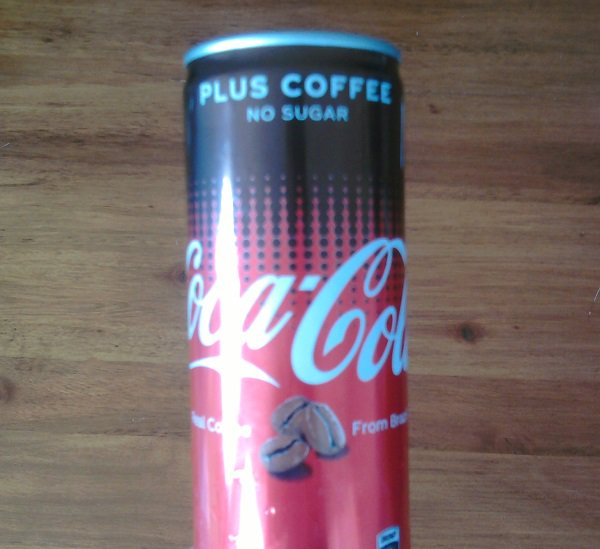 I won't say that I don't know what possessed Coca-Cola to​ come up with this product but I do know that it will pass into the realm of the past with almost no lament at all, and that's a shame because it isn't all that bad.

In my not very well paid opinion, the king of coffee in a can is made by Ueshima Coffee Company and is labelled UCC. Coming in a close second is the coffee in a can made by Pokka. If you've never had coffee in a can before, it can be something of an unnerving experience but that sensation of mental calamity very quickly wears off. I expected Coca-Cola And Coffee to be as equally as weird the first time and completely normal after that. I was half wrong.
Coca-Cola And Coffee was completely normal to me from the get go and therein lies what I think is its main problem - it is dull. There's a little bit of a brain disconnect when you experience the two flavours of Coca-Cola and Coffee competing with each other and then the flavour is exactly what it says on the tin; it is Coca-Cola And Coffee. It's not mind numbingly amazing and it's not brain implodingly terrible. As a thing which is exactly what it purports to be, it is what it is and that's a problem.

When you buy a can of Coca-Cola, you are expecting a can of Coca-Cola. When you want a can of coffee, you are expecting a can of coffee. I can think of no point in my life, either before or after why I'd want both at the same time. It would be like going to a café and ordering Coca-Cola in it, or alternatively going to a place that served cold drinks and asking for a Coke with coffee in it. Sure, you can do it but why would you?
I quite like Vanilla Coke because that has crossed the boundary into its own territory and for that same reason, Cherry Coke has also crossed the boundary into its own territory even though nobody knows what sort of cherry that it's supposed to be. In fact I'd argue that precisely because nobody knows what sort of cherry that the cherry in Cherry Coke is, that that is the reason why it is so wonderful. Coca-Cola And Coffee isn't particularly distinctive enough to justify its own existence.

Coca-Cola And Coffee falls into that same valley of indifference as Pepsi Max and Lime. The difference with Pepsi Max and Lime is that it does have a point and that is that it is secretly calling out for a shot of Bacardi to be put into it. Coca-Cola And Coffee seems like a solution to a problem which nobody knew that they had and nobody asked for either. It is like the key pocket on a pair of Stubbies that no key can ever fit into; yes it is a thing but why? It as though someone at a board meeting thought that it was a good idea but no A/B testing was done afterwards.
Don't get me wrong. I am not saying that it is unpleasant at all. If it was a hot afternoon, you would be quite happy to have it as a cold drink but that's because it is a cold drink rather than anything else. You absolutely not spit it out in a giant comedy spray which can be posted on YouTube later. In fact if anything, it will register remarks like "Hmm" and "Oh" as you try to determine what it is; then having done so, you'll be left with a quizzical expression as you ponder why but come away with no answer.

I don't hate Coca-Cola And Coffee, I don't love Coca-Cola And Coffee. I have no strong feelings one way or the other. This is a thing which in the year 2037 people will say "that was a thing" and someone will get completely hyped for in a wave of faux nostalgia for a thing. It will be like Leed Lemonade, or Sunkist orange. It will be was a thing and no more.
Posted by Rollo at 08:08