Mid-life crises are really only available to those people who are relatively well off and have money to burn as though it was London in 1666. For the rest of us who need to keep our noses to the grindstone, just so we can keep on bleeding so that the wheels of industry keep on turning, the idea of a mid-life crisis is laughable. Finding things difficult is just part of normality; so you'd better take a couple of concrete pills and harden up.
Usually the only sorts of mid-life crises open to the grindstone classes are things like taking up exercise or maybe a musical instrument but I don't know if it counts in my case because I'd always chucked about the idea that I've wanted to play the guitar; after spending so much time around sound equipment for various reasons. If I was going to get a guitar, I wanted a cheap electric one so that when I was noodling around and being crap at playing it, it wouldn't terrorise the neighbours.
This Christmas just been, Mrs Rollo gave me a kit for a 3 string guitar. I don't think that either of us realised this but what she actually gave me was an open door to a small obsession. Granted that I have the musical skills of a rabid badger but even someone as ham fistedly incompetent as me can play something that passes as music on this thing.

From what I can gather, the 3 string guitar has a history which goes back way further than electricity. This is an instrument born of poverty and invention; and plays right into that tradition of blues and roots music. It easily predates jazz and the somewhat percussive and rhythmic nature of the beast probably helped to write the rules for jazz and delta blues.
The standard blues tuning for 3 string guitar is GDG. Those of you who are accomplished musicians will already know that this is a 1-5-1 tuning of an instrument and just like any other 1-5-1 tuning like EBE, chords can be played by just barring all of the strings. Of course it also means that  don't really need to worry about tuning it to anything in particular because as long as the 5th fret on the middle string and the 12th fret on the bottom string all ring out the same note, it's all cool.

Related to the 3 string guitar, which is usually made with a cigar box as a resonator, is the 1 string diddly bow. The diddly bow is probably even more born out of necessity than the 3 string guitar. As the diddly bow has only one string, it is even more of a percussive instrument than the 3 string. It is because of the diddly bow that Bo Diddly took on his stage name; after he learned his craft on one of these and then moved onto more strings.
The diddly bow which doesn't even have to be tuned to anything in particular, gives away that latent secret hiding in plain view of all stringed instruments. An octave higher is always half way and those notes of 3, 5, and 7, will just make themselves obvious with almost no effort.
Also, why I'm here I may as well answer that debate about perfect pitch and tuning. There is this suggestion that after at least Der Well Tempered Klavier by Johann Sebastian Bach, that we don't really hear music the way that people of old did. I won't go too much into it but modern music kind of slightly mushed the notes around so that notes in all keys don't run into Pythagorean Dissonance. Orchestras tune up to A at 440Hz and an argument rages in academia about what the proper frequency should be. After playing a diddly bow, I've come to the conclusion that I don't care. When you have no idea what the heck note you're starting with then all notions of exactitude just fly away. I love the scrappiness of the thing; so much so that it has kind of awakened a run of obsession for me.

I think that the deeper reason of why this has sent me on a run of obsession though, is that this is kind of instrument is of a very old tradition of garagistas and people working away in their sheds. Again, due to the fact that I also have the practical skills of a rabid badger, I like the idea of people working away in their sheds and making things. One of the best shows that I've ever seen on television was James May putting together things like a lawnmower or a record player, and that was literally all the show was - a dude in a shed; making stuff.
When I go on the internet and I can see people making stuff and then playing what they've made, that strikes two very particular dopamine receptors in my brain. I once saw a chap who made a three string electric guitar out of a shovel and let me tell you, neither you nor I will ever be as cool as he. Forget Bono, this dude makes Bono look like Nigel The Nuff-Nuff.

To feed this run of obsession and probably to strike those dopamine receptors in my brain, I've spent the last few weeks, just sort of looking in hardware stores for stuff. Now that I've had a decent look at how a guitar works, it wasn't that difficult to think about how you go about building a basic guitar; to that end, enter the Spamjo. 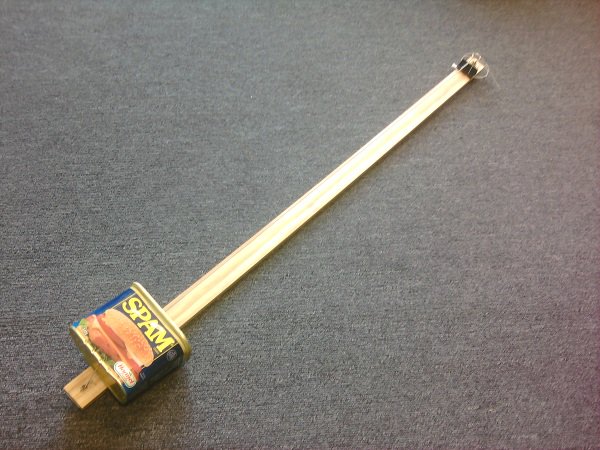 The Spamjo is just a diddly bow tuned to... who knows? I sure as heck don't. The beauty of it was that it didn't exactly break the bank either. All its made from are the following:

That's a working 1-string diddly bow for less than twenty bucks. The most expensive bits were the string and the can of Spam and to tell you the truth, I only wanted the can of Spam because I liked the pun because otherwise it would have just been a canjo.
The action on this thing is insanely high because I was going to use an actual nut and bolt for the nut but as the hole in the tuning key sat proud of it, that was impossible; so I had to make do. What this means that you need to play it with a slide and since I use a piece of electrical conduit for that, if you want to add that to the total price, that's only another 40 cents.

The two rivet eyelets act as the tailpiece through the piece of wood itself and the bridge in the base of the can of Spam, which itself is the resonator box. The bridge is a bulldog clip of which I have a surfeit of in the office and as with all acoustic guitars, the string is held in tension between the tuning key and the tailpiece, and that's pretty well much it. I drilled the hole for the tuning key with a screwdriver and a hammer.
Where are the frets? Given that it's a slide guitar, I've just made some pencil marks down the bit of wood after looking at a fret calculator online.
The Spamjo sounds far better than you'd think it would. That is to say, it sounds like a semi competent musical instrument. I deliberately picked the G string from a bass guitar because that meant that there wasn't a bunch of tension in the thing. Nevertheless, it still sounds pained; which is pretty much at the heart of blues music. Also, as the scale length (nut to bridge) is so much longer than the 3 string guitar, the need to be exact when it comes to finding where the frets are, is gone.

After literally building this in a park at lunchtime, I've acquired a better appreciation for why proper luthiers make certain decisions. If I was going to build a better one (this one is mainly proof of concept), then I totally want to think about angles of the headstock, proper fretboard construction, whether or not I'd want a floating or fixed bridge, the kind of tailpiece and saddle I want for the strings and even about potting my own electric pipickup.
I will never rock the world but I can rock the immediate three feet of space around me. If this is a mid-life crisis, then this has to be about the cheapest mid-life crisis out there. All y'all can have your mid-life crisis and play with your fancy sports car, I'll be playing awful blues music in the park on a 1 string Spamjo that I built for less than twenty bucks.
Posted by Rollo at 07:17

What kind of blog is this?