One of my former housemates was walking through the suburb of Gladesville when he came across one of the most high-tech advertising hoardings that anyone has ever seen. Not only did it have a flat screen built into it but it also had a camera built into it. 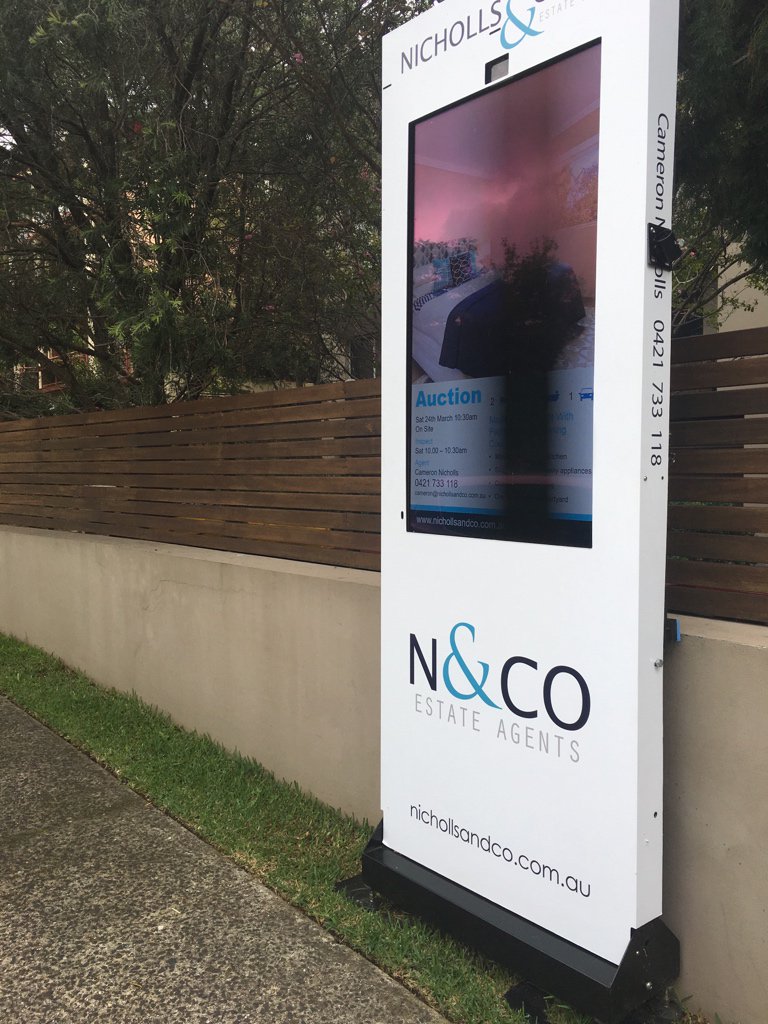 Still, the question posed by the original tweet which sparked this was:
Wondering whether it’s legal / morally acceptable for a real estate agent sign out the front of a property in Gladesville to have a camera built in that films the footpath?
-

Of course you could ask the reverse question and see if filming someone is an infringement of their rights. Again, the courts have already made plenty of rulings about this:

With regard to the question of privacy, no doubt the owner of a house would prefer that a neighbour should not have the right of looking into his windows or yard, but neither this court nor a court of law will interfere on the mere ground of invasion of privacy; and a party has a right even to open new windows, although he is thereby enabled to overlook his neighbour's premises, and so interfering, perhaps, with his comfort.
- Latham J, Victoria Park Racing v. Taylor (1937) 58 CLR 479

There seems to be a suggestion that there isn't a clearly recognised tort of invasion of privacy in Australian case law. What that might be true, the next question is, is an action which takes place in public, such as filming someone, constitute a violation of an invasion of privacy? The answer to that is quite obviously "no" because a public place is by definition public. Claiming that you have had your right to privacy violated in a public place, is clearly ridiculous.

This is the reason why in principle, the framers of the Australian Constitution didn't want to include a Bill of Rights. The Bill of Rights in the tradition of English common law, doesn't give you any new rights, it merely confirms what rights that you already have; if you expressly spell out those rights, you them limit people's vision to what's on that piece of paper.

I won't get into some philosophical discussion about positive and negative rights but suffice to say that the rights which are held by or conferred upon an individual are also generally held by companies by virtue of them being separate legal persons. That weird neighbour who has an army of cameras trained at the street because he is worried about punk teenagers chucking rocks at his house, is operating under the same legal right as this real estate agent.

Is it creepy? You bet your life it is. It is exactly this realm of creepiness that the paparazzi operates in; because there is no magical difference between a famous person and an average Joe Citizen, that they are able to take photographs in complete impunity. Once someone has entered the street, it's completely fair game to photograph them and take videos of them.
I think what's perceived to be offensive here is that we an unthinking and unfeeling device in a public space which stands impersonal and ominous. The company which put it there has as much right to photograph and film a public space as anybody else does; which is to say that they can do it in complete freedom.

This isn't exactly all despair and gloom though, the very fact that public space (and let's be honest, there is no more public space than the street itself) has no privacy, means that that defence also can not be weaponised against you. If you do find someone acting in an illegal or nefarious fashion, which might include outright corruption or brutality from powerful forces and indeed those from whom we expect levels of decency like the police, then not only do you an unimpeded right to take photographs or film in public but I would argue that you have a moral obligation to do so.

The broad answer here isn't whether you are legally allowed to do this but rather, if is illegal to do this. As there is no law which hedges or restricts the right to photograph or film people in a public space, then it isn't illegal. Whether or not it is moral, assumes that people operate under a broadly similar morality and since people will do anything that they think they can get away with, morality is an awful yardstick.

As for the assertion that the real estate agent is looking through the camera to assess the viability of potential buyers, I'm prepared to dismiss that notion entirely out of hand. While I do think that real estate agents are for the most part incredibly shady individuals, having done the accounts for several real estate agencies over the years, my experience tells me that they are also extraordinarily lazy. In a property worshipping city like Sydney, merely listing a property is usually enough to ensure that it gets sold.
On a selling fee of only 1%, then they'd expect to take in more than $8000 on this property at a bare minimum. It probably costs them less than a couple of hundred dollars all tolled to list a property on various websites and publish an advertisement in the newspaper if anyone does that anymore. At best that's about half an hour's work and maybe some routine paperwork and consultation time when they actually make the sale; if money is the thing which actually does the talking, I don't think that they'd honestly care about who was staring at their advertising hoarding on the street.