Probably since the beginning of motor racing, the perpetual story has been one of teams and drivers looking for any advantage that they can possibly find, and the motor manufacturers showing and losing interest over time, to suit the propaganda needs at any given point. Australia which is a relatively small country, is no exception; with the major motor manufacturers of Ford and Holden showing waxing and waning interest over time.
Also in the curious case of Australia, since about 1967, the dominant form of motor racing has been what essentially amounts to pitting high powered taxi cabs, family cars and executive cars at each other. Running GT cars like they do in Europe, or insane econoboxes like they do in England, never really catches the public's imagination here.

In 2018, we find ourselves at an incredibly curious junction in time. Toyota, Ford and Holden have all closed their factories in Australia; which means that the biggest manufacturer of motor vehicles in Australia is either Volgren or Custom Coaches who both make buses, or Victa who make ride-on lawnmowers.
The way that this relates to motor racing is that in this year's Supercars Championship, the three kinds of cars being run are one which hasn't been manufactured for two years and is now a legacy artefact, one which is no longer on sale in Australia, and the third which although brand new has to be imported. None of them run an engine which was ever available with that model of car.  Basically the Supercars Championship is a motor racing series for bespoke weird taxi prototypes.

The other thing of immediate note is that the cars in this bespoke weird taxi prototype series, are covered by a very specific set of conditions which are laid out in a vehicle specification document. Both the Ford Falcon and the Nissan Altima which are no longer available, are covered by existing documents but the brand new ZB Holden Commodore had to have a new vehicle specification document and this has had rather nasty consequences.

As the manufacturer, Holden has had quite a lot of say in the new vehicle to go motor racing in. Also due to the nature in which the current rules were originally drawn up which was semi exclusionary, it meant that a manufacturer could choose to withdraw approval for an outgoing model if their desire for a change in propaganda saw fit. In 2018, approval for the outgoing VF Commodore was withdrawn and anyone who wanted to run a Holden had to switch to a new ZB Commodore.
The thing is that the switch from the VF Commodore to the new ZB Commodore isn't a simple panel swap because the ZB which is a hatchback, has a vastly different rear end construction to the VF. To go from VE to VF only required a change in panels and light clusters but to go from VF to ZB means an entirely new chassis has to be built.
Naturally as Holden doesn't have a manufacturing plant Australia any more, that means that they couldn't simply pull unfinished chassis off the production line. Every ZB chassis has had to be a bespoke piece of kit and because 888 Engineering is the only team running who has any direct backing from Holden, it means that all of the ZB Commodores running in this year's Supercars Championship have proprietary hardware in them. For instance, if you open the hatchback, you find what looks like another firewall, and because 888 Engineering owns the proprietary hardware, their labels are all over the place in there.

The short story is that for 2018, instead of upgrading equipment or pulling unfinished chassis off of the production line, all of the teams running the ZB Commodore have been forced to become customers of 888 Engineering. Instead of doing a swap from one model to the next, which would have cost about $8,000, or building their own bespoke chassis to the approved specification, they've had to purchase new kit at a price of about $40,000. The only other alternative would have been to go it alone and develop a new car and get a vehicle specification document for that and given that there aren't any more manufacturers left in Australia, that task is quite a lot more massive than it otherwise would have been.  A team could choose to build a Mazda 6, but that would mean negotiating with the factory in Hiroshima, a team could choose to build a Kia Stinger but that would mean negotiating with the factory in Seoul. This process is almost certainly going to be met with all kinds of asterisks and conditions all the way down, as well as be subject to the whim of the propaganda needs of the company.
In effect, the teams that aren't 888 Engineering including the ex Holden Racing Team (having been dumped by the manufacturer like a plate of cold vomit), have been held to ransom and I don't think that contentment reigns up and down pit lane. This has led to what I think is a very subtle protest. 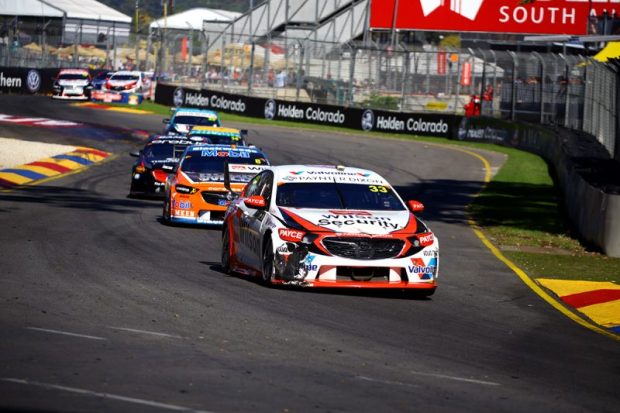 Garry Roger Motorsport who runs the cars for Garth Tander and James Golding, were once running Volvos before they had a public bust up and the Swedish company took the chassis back home to Sweden (incidentally, I haven't yet found any evidence that they've been run again). After being burned once, I can understand the outrage of now being held to ransom by Holden.
Throughout the weekend at the Adelaide 500, I kept on noticing that something peculiar and which was conspicuous by its absence: the little lion badge on the front of the Garry Rogers ZB Commodores. I can't say for certain that this was a protest but knowing what I know about Garry Rogers, it seems entirely possible.
I remember a few years ago that WPS Motorsport ran a visor banner which read "No Support From Ford" after the propaganda department at Ford decided to take their whims elsewhere. 888 Engineering which now is the doyenne of Holden, at the time was running Ford Falcons an replaced the little blue oval with a pink pig logo from the Hog's Breath Café.
If I was running a motorsport team and I was held to ransom by the motor manufacturer into buying a piece of kit like this, I'm pretty sure that I would have done this exact same thing. I mean I could be entirely wrong here and this might be as simple as the badge falling off at the beginning of the weekend but I'm pretty sure that that badge is part of the moulding for the grille insert; so my suspicion is that this is deliberate.

I hope so.
Holden are now just another import company. They're as Australian as football, baseball and apple pie, now.
Posted by Rollo at 07:17

Email ThisBlogThis!Share to TwitterShare to FacebookShare to Pinterest
Labels: sport