http://www.abc.net.au/news/2018-04-13/what-your-habits-reveal-about-your-social-class/9610658
Your tastes match most closely with the upper classes
Your cultural tastes are most similar to an upper class woman, aged 60+ with a postgraduate education.
- ABC News, 13th Apr 2018 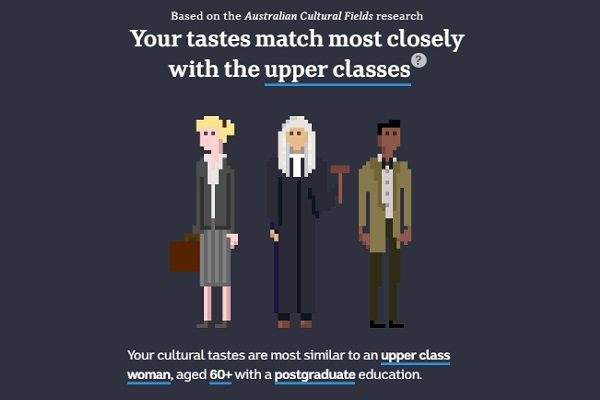 According the Australian Cultural Fields project and this funky little quiz from the ABC, my tastes mean that I am probably a 60 year old woman with a postgraduate education and in the upper classes.
I find that somewhat amusing given that I'm actually a 39 year old man living in the heart of the bogan Western Suburbs of Sydney, and spent part of this week watching the Japanese Super GT championship on YouTube. Of course, I did also happen to watch Scandi crime drama, listen to the AFL and English League One football on the radio and play the cigar box guitar; so I don't know what any of that says either.
I think that it's supposed to mean that I am dead posh lyke, or at least that's what the ABC thinks.

New research from the Australian Cultural Fields project — one of the most detailed investigations into how cultural tastes and lifestyles connect with privilege in Australia — sheds light on what that might be.
The findings, to be published later this year, reveal how strongly our cultural tastes — such as the books we read, the music we like, the TV shows we watch, and so on — align with characteristics like class, education, age and gender.
- ABC News, 13th Apr 2018

I have long since accepted that I am something of a cultural oddity. I have also long since accepted that I am a chronological aberration as I much prefer listening to the radio than I do watching television. I make no secrets of the fact that I like ABC RN (which should return to calling itself Radio National), BBC Radio 4, NPR as well as various podcasts from places as varied as Maximum Fun, Politico, Radiotopia and independent offerings.

I have no idea how the Australian Cultural Fields project was compiled but I bet that if they've distilled this into these few questions, they have very good reason to. Ultimately any cultural project that looks into the connections between how culture is received and what kind of culture is received, is going to relate to class and education, simply because those things have to do with exposure. And as someone who commutes from very close to Sydney's poorest suburb to the 7th richest suburb in the country, I can tell you that there are very much widening class divisions in society as I observe them.
However, none of this explains why the ABC thinks that I am probably a 60 year old woman.

To get to this specific area of demographics, the questions take a turn of a literary nature. The truth is that ever since the dawn of the novel in the 1810s, ladies have always been more culturally engaged with books. Maybe this has to do with the fact that booksellers have long realised than men have shorter attention spans on the whole, which means that novelists are more likely to write books for women; maybe this has to do with the fact that women's brains are on the whole more capable and efficient at dealing with nuances of language because they spend more time talking to each other and children, than men are ever likely to; maybe it has to do with the fact that they spend more time reading because men are more likely to spend their leisure time doing and watching more idiotic things. Whatever the case, the truth is that at literary festivals you are more likely to find women in attendance, and I can say this with complete obliviousness to facts and truth because I like most men, have never been to a literary festival.

Of course it could be that with improving sorting algorithms, that mining data for key points that will give you the ability to determine differences, is just so much easier than it used to be. We don't really know what the initial set of questions was in the original sample survey but the fact that they've been able to produce a predictive questionnaire says that they expect that past results are indicative of future ones; that goes right to the very heart of analysis and prediction.

I also think that this might have been more difficult in days gone past as well. Before the internet, we only had a few television channels and the costs of producing media such as television, radio and print, were prohibitive to the average person. Although we had fewer choices, it meant that we were kind of closer together when it came to the media that we consumed. People still split into tribes based on culture and class but more of us were watching the same television programs at the same time. Today where the barriers to entry to produce media are far lower, the democratisation of production has meant that we have become more fragmented in the cultural experiences that we're likely to encounter.

I also find it interesting that this article talks about things like art galleries and museums and libraries being free and open to all but neglects to make the point that much that the basic problem of getting to these places in the first place is an issue. I think that I live probably 40km away from the city, which means that if something is on at say The Art Gallery of New South Wales, i would have to make a whole day of it; whereas someone living in Newtown has only to travel five stops.
It also draws the correlation that if you are a bright young thing, you're more likely to be going out to various cultural events. I don't know how many +60 year old ladies are going to see Nicky Minaj at the Qudos Arena but I wager that it can't be many.

Of course maybe this is a warning that maybe I really am like an old woman. I do know that my joints frequently hurt me and that I like to wear coats and hats. Maybe I aught to learn how to knit; so that way I can knit covers for ICBMs because if I my cultural tastes really are most similar to an upper class woman, aged 60+ with a postgraduate education, then I hope that she's an upper class woman, aged 60+ with a postgraduate degree in Nuclear Physics.