I really really like watching motor racing. Although Formula One is the pinnacle of both talent and technical wizardry, I prefer watching the much more humble contests that you get in touring car racing. Of course, living in Australia where we used to build our own cars and where we have one of the greatest race tracks in the world at Bathurst, that's kind of half to be expected.
There is/was something almost a little bit magical about watching cars which you could buy off the showroom floor, being sent into combat against each other. GT Racing, which is kind of what the Supercars has been drifting towards for the last three years or so, just doesn't seem to do it for me. The British Touring Car Championship, which has hatchbacks going against each other is closer to that spirit.

When I were a wee lad, the sport had switched from the home developed Group C category to the international Group A. Ford had stopped selling a V8 Falcon and didn't really have anything that they could play with. Holden found that its Commodore with a big engine, wasn't all that competitive because of the weight penalty imposed on it under the rules and for a while, touring car racing in Australia was being showed up by Volvo, BMW, Nissan and the Ford Sierra which wasn't officially sold in Australia.
Ford Australia had no V8 in their domestic lineup from 1984 to 1990 and so they didn't bother to build a Group A car at all. Holden had their V8 slightly clipped due to the change in the regulations which mandated unleaded petrol in 1986 and so they were left with machinery which was reasonably competent at lasting a thousand kilometres but lacked any kind of outright speed against the cars from overseas, which had in some cases three years of extra development poured into them.

Holden was shown up in its own backyard in 1985, when Tom Walkinshaw Racing (TWR) brought three Jaguar XJ-S to the Bathurst 1000 and won it on their second go. The win in 1986 was something of an anomaly because in 1987, the Ford Sierra RS Cosworth finally fulfilled its potential and wiped the floor with everything.
I think that the 1987 Bathurst 1000 sent shockwaves through Holden, as not only had they been beaten for line honours at Bathurst¹ but they had had a very public spat with their favourite son, Peter Brock, and this meant that during the 1988 touring car season in Australia, Holdens were very much also rans.

At some point during 1988, Holden employed TWR, the very same team which had beaten them in their own backyard, to develop a Group A package for the VL Commodore; they came back with a wild looking thing which very quickly took on the name of Walkinshaw as an eponym.
The development of the VL Group A Commodore happened so late in 1988, that by the time of the Bathurst 1000, there were only three examples in existence. For the race there was the number 10 car which was run almost as a separate team by Perkins Engineering and the number 20 which was the full on TWR car.
And then there was number 40. Or was there?

I have for many years wondered about whether or not this car actually existed.  The chassis was purported to have been campaigned in later seasons by Llynden Reithmuller  but I could never determine whether or not this was either 10 or 20, which had been sold (it turns out, neither).
My assumption for more than three decades was that Holden had put in three entries for the race in order to get more track time but had only two cars that physically existed. My suspicion was that TWR renumbered the 20 car as the 40 car² because number 40 ran only on the Thursday and number 20 ran on Friday, Saturday and Sunday. The two cars had never been seen on track together; which is also pretty suspicious. I had also never actually seen a photograph of the 40 car, which made me wonder even harder if it had truly existed at all. 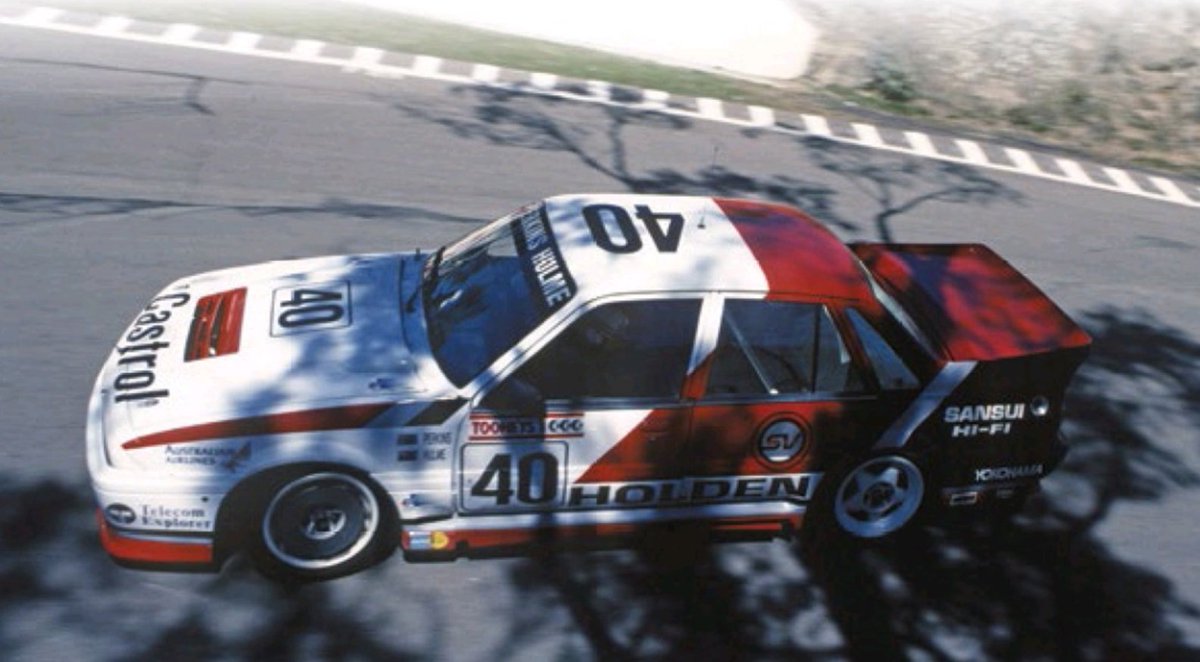 When I saw this photograph, my fragile little mind was blown. Three decades of wonder was now quelled. I can see for myself that the little details such as the badging and alignment of various decals, means that this was in fact a third car.

Given the abysmal results of Holden in 1988 and 1989, the VL program would have turned out to be a complete failure if it wasn't for a surprise win at Bathurst in 1990. The number 20 car bit the wall in the 1988 race and the 10 car... The 1989 Touring Car Championship was virtually a waste of time for Holden, and seeing as the Holden Racing Team was the factory backed team, I further wonder if management was considering pulling the plug on the whole thing.
If I was to play the whole of 1991 and 1992 out in my mind, Holden would have shut down the Holden Racing Team and those people who really wanted to build a General Motors touring car would have opted for the Opel Calibra Turbo 4WD, which would have been a seriously interesting prospect against the Nissan Skyline GTR R-32 had that ever happened.

As it is though, the VL Group A Commodore was an interesting chapter in Australian motorsport history, which looks precarious even now. The mystery of whether or not the number 40 car actually existed has now been settled for me.

¹this was overturned in the courts.
²given that TWR ran the car and had run Jaguars at Le Mans and the Arrows Formula One team, a piece of skullduggery was well within their wheelhouse.