The funnest car that I have ever owned was a Ford Ka Mk1. It wasn't the biggest; it wasn't the most powerful; it wasn't the most luxurious; most people would say that it wasn't good looking either (I thought it was a little cutie), however it had the wheels right in the corners, had a width to wheelbase length which was just so, was nice and light and so could be thrown into corners with gay abandon, and had a five speed manual gearbox and steering components which came out of Ford's parts bin but felt like they were personally selected by the angels.
I will wax lyrical about the Ka until someone gives me one or I find something better.
I came close.
I wanted a Fiesta but Mrs Rollo wasn't up for that and so we got the last car to come out before the Ford/Mazda divorce - the Mazda 2 DJ. It is an ace little thing and while it isn't as stellar as the Ka, it is seven kinds of joy making. I'm almost prepared to forgive the automatic gearbox because it has a SkyActiv semi-manual shifter, which almost makes up for it. 9.4/10 - would recommend.

I have been watching closely to see what Mazda is going to do post divorce with Ford. Mazda no longer have access to the intellectual property underpinning new Ford cars and so they have had to develop their own platforms if they want new ones. The new Mazda 3 is one of those new things.
After Ford, Holden, and Toyota all upped sticks after being yelled at by Joe Hockey, the three big volume sellers have been the Ford Ranger, Toyota Hilux, and Mitsubishi Triton. Behind them there has been a peloton of makes, which include the Corolla, i30, ASX, and Mazda 3. The new Mazda 3 has a lot to live up to but from what I can gather, it has done a brilliant job at precisely that.

The BL ran from 2008 to 2013 and still shared the common platform with its cousin, the Ford Focus Mk 3. It is by all accounts an excellent car. The BM/BN ran from 2013 to 2019 and was the first '3' to be sitting atop the new SkyActiv platform. It must have been something of an incredibly well kept and difficult to keep secret because I think that when stacked against the contemporary Ford Focus and Volkswagen Golf, it was better than both of them.
I haven't yet driven a BP but it looks like it is a evolution of the BM rather than a revolution. The platform, and all the underpinnings between the A-pillar and C-pillar are from what I can determine, the same. The SkyActiv engine and drivetrain has carried over too. In theory, these are the ingredients for another class winner.

Except for that gumby looking C-pillar. 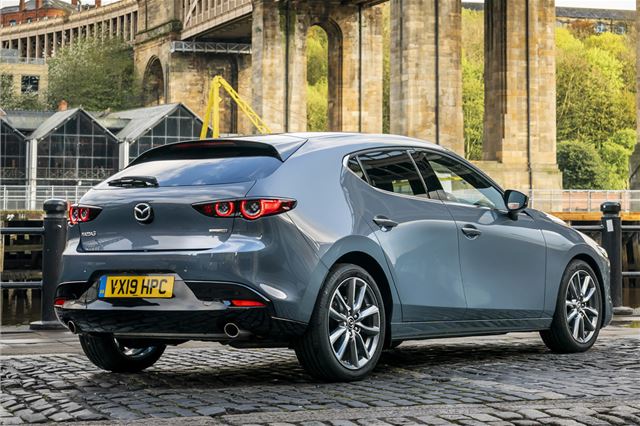 I can not believe that that went through the process of pencil, computer, clays, and prototype, without one person saying that it looked naff. I think that the C-pillar on the BP Mazda 3 looks naff than Naff Jack McNaff, the winner of the 2019 Naff Naffman competition.

BMW worked out in the late 1970s that the Bachmann Kurve in the rear window meant that people perceived the car to be more valuable than if it wasn't there. As we've had a series of design trends over the past 20 years, rising belt lines and a more hoopy roof line which is structurally more sound, has meant that we've seen a host of cars with C-pillars where the top has been pinched¹. This has also allowed the so-called floating roof, which looks to be a passing fad which is almost done with.
The new Mazda 3 has I think tried to step away from the trend and march to its own drum beat, which has mostly worked for the rest of the Mazda family. The 2 is a cutie. The 6 looks like it should be a far more expensive car than it actually is. The Miata was and is and still remains the gold standard of what a small convertible should be. The CX-5, CX-5, CX-3, are all SUVs that I still don't want to buy. And the BT-50 has successfully managed to look sufficiently different from all other tradie trucks that it is kind of pulling the styling trends along. I just don't know about the 3.
I had so many doubts about it that I took to it with my mad Paint skillz, yo. 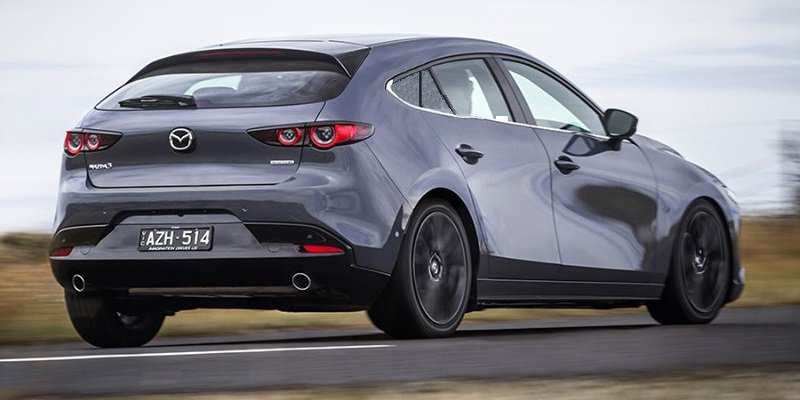 The Mazda 3 is actually part of a longer line of cars than you might think. In Japan, it carries the Familia nameplate and that dates all the way back to 1963. Most of the rest of the world got a the FA4-BJ Familiar as the 323, and in Australia we also got those assembled by Ford Australia as the KA, KC and KH Laser at Homebush and the
I personally think that the KC Laser is possibly the prettiest hatchback ever built and it also answered the design question of what do with the C-pillar nicely.

The problem for the automakers is that they want to produce as few unique parts as possible. If you have a 3 and 5 door variant of the hatchback, a sedan and maybe a wagon variant as well, then if you can produce one set of doors for all of them than that is the best outcome. Quite obviously Mazda has used the same rear doors on both their sedan and hatch and because the sedan already had the Bachmann Kurve as a feature, it sort of left them with nowhere to go. Probably glass is more expensive than metal and so rather than install a window behind the rear door, they gave us this claustrophobic solution.

Mazda as an organisation is sufficiently nimble enough that if it feels that they have suffered, then they will make mid model corrections⁴. For a completely unknown reason to me, Mazda decided to replace their rather sensible noses a while back, with their 'happy bunny' suite of noses. I thought that they looked weird but the market liked them.
This time around, I think that the Mazda 3 BP looks handsome in the front but gh weird as all get out in the back. I hope that it gets corrected but I very much doubt that it's going to be unless the sedan also gets a change too. There's very little chance of that though.


¹The most extreme version of this is that the Toyota CH-R which is vomit inducing if you have little ones in the back because even as a big person I struggle to see out of the rear windows. Wee kiddies have no hope. That's a recipe for a spew festival back there.
²And given that I've been writing blog posts for more than 20 years, you'd think that I would have worked that out by now.
³Go on. Diagram that sentence out. Muah ha ha ha!
⁴Ford's AU Falcon with the original clamshell was so much of a commercial failure that the AUii came out in very quick succession. Likewise the K12 Nissan March which had the 'Poirot' mustache did reasonably well in Japan but had a rest of world restyle mid way through the run.
Posted by Rollo at 11:44