Yesterday evening, Brady Haran of , Sixty Symbols, Periodic Videos, Hello Internet, the Unmade Podcast... et cetera, et cetera, et cetera, posted a photograph of the fantastic scoreboard at the Adelaide Oval on Day Two of the Second Test between England and Australia. The scoreboard at the Adelaide Oval with its army of operators inside, is the fastest scoreboard in the world because unlike electronic scoreboards, the people inside watch the game meticulously and yell at each other in a beautifully organised system of mayhem which results in accuracy.

However, this promted a stream of confused people on Twitter:

"I'm an American and that scoreboard is 100% inscrutable" - Carl
"That scoreboard is confusing as hell. It’s so hard to pick out the key details" - Richie
"How do you read that thing?" - Ryzhahrd‏

Cricket is one of those games which unless taught at birth is unfathomable as nuclear physics. It is a game which from the outside has almost arbitrary rules and which produces so many statistics that every year, a summary of them is produced in a book which is several inches thick.
Not surprisingly at all, a game which is that comples and produces a set of statistics which are equally complex, invariably needs a scoreboard which is equally complex. This them is an explanation of the scoreboard.

The basic mechanics of cricket are thus:
- a bowler bowls the ball
- the batsman defends his stumps with the bat
- after the bowler has bowled six balls in a set called an "over", another bowler has a go from the other end
- if the batsman hits the ball far away enough, or if the bowler misses everything badly enough, the batsman can run.
- the score is scored in runs.
- batsman can get "out" in a number of ways.
- once ten batsmen have got out their innings is complete and the other side has a go.
- once both sides have had two innings, the match is complete.

Got it?
In this match, Australia is batting first. 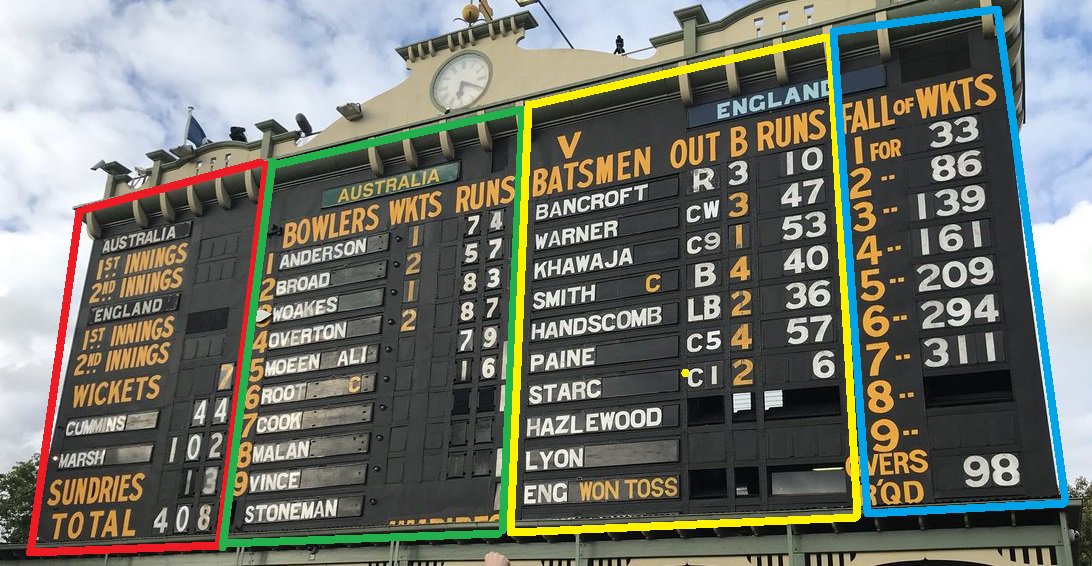 Red section:
- No innings are complete.
- 7 wickets have fallen. 7 batsmen have gotten out.
- the two batsmen who are currently in are Cummins who is on 44 run and Marsh who is on 102 (scoring 100 is a fine thing to do).
- 13 runs have happened but not been scored by the batsmen.
- the score is currently 408.

Green Section:
- this is a list of all the likely bowlers.
- Number 1, Anderson has taken 1 wicket and conceded 74 runs from his bowling.
- some bowlers have taken 2 wickets and some have taken 0 wickets.
- the current bowler is Woakes.

Yellow Section:
- this is a list of all the batsmen who have gotten out and who is yet to come.
- the column "out" tells you how the the batsmen got out (Run out, Caught with a number of who took the catch, Bowled, Leg Before Wicket) and which of the bowlers was bowling.
eg. Paine, Caught by Moeen Ali, Bowled by Overton, out for 57 runs.

Blue Section:
- this is a list of when the batsmen got out, how many runs had been scored as each wicket fell.
- Overs Required, there are 98 overs required to be bowled today.

I will concede that this looks bewildering but it contains a lot of information; I think that it does so rather elegantly and compactly.

Australia would go on to finally get 442 runs when they finally decided to declare their innings closed with only 8 wickets gone (batsmen getting out). In reply and at the end of Day Two, England are in trouble, having only scored 29 runs but one batsman has already gotten out.
Posted by Rollo at 07:17