Pat Benitar once sang that "Love Is A Battlefield". I will freely admit that I have no idea how the song goes or even who Pat Benitar is; the first Pat that springs to my mind has a postal van and a black and white cat. The Chinese writer of old, Sun Tzu, wrote in "The Art Of War", that there were nine kinds of terrain and that they have names which are kind of like Snow White's Dwarves' heavy metal cousins: Scattering, Light, Strategic, Open, Crossroad, Heavy, Intractable, Enclosed, and Death.
If love actually is a battlefield, then there are certain types of terrain which one would do well to surrender upon. I know not which kind of terrain that the following is but I suspect that it is anything then it is probably intractable because every which way I look at it, defeat is a certainty. 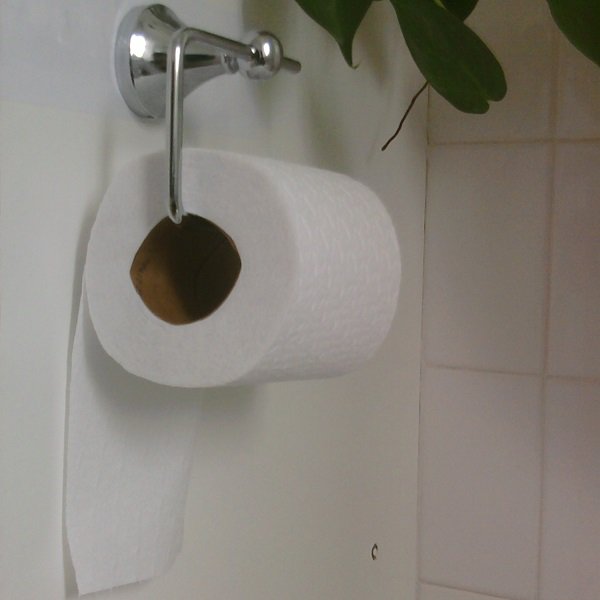 As a commander on this battlefield who subscribes to the theory that scrunch is better than fold, that when filing the paperwork that water makes for a better result, if could issue commands that would be followed, then going over the top is better than a rearguard action from the back. In my perfect world, the only excuse for orientating the roll so that the paper trails out the back rather than the front, is if you happen to have an enthusiastic kitten who likes to unravel the entire roll. If you do happen to possess such a kitten, then there is still merit in sending the tail over the top because you can take a video and post it to YouTube.

By way of legend, the average person spends approximately 28 years in bed, 4 years standing in queues and 56 weeks enthroned upon the seat of porcelain. By that logic, the average person should also spend approximately 19 days of their life filing the necessary paperwork for this act (some people file the paperwork in triplicate). If I am going to spend that long in filing paperwork, then in my perfect world, then I would want that paper to be available and dispensed in a speedy manner. Nobody likes filing paperwork under any circumstances; any help which speeds up the process is in my not very well paid opinion, desirable.

Apparently the Romans used bits of cotton on the end of sticks to do this job. This seems like utter madness to me as the very real clear and present danger which immediately arises, reminds me very much of the Miller's Tale and what Absolon did, except that this punishment would be self inflicted. We have the New York Women's Club in 1871 to thank for the invention of the necessary paperwork for discreet purposes, in a perforated roll; which seems indubitably more sensible and obvious to me. What those august ladies in the latter half of the nineteenth century did not give us, was the explicit instructions that the paperwork should be installed in such a way as I have described, rather than the way of madness and incredulity which currently exists in the smallest room in my house.

This is a battlefield on intractable ground as far as I can tell and a battlefield upon which I have surely lost. The white flag of surrender now hangs limply over the back of the roll; instead of the front, where metaphor and reality are entangled. To those who remain in this fight, I ask you if this is the hill that you really want to fight and die upon. For me, there is no hope and surrender is all that remains.
In the dying of the light of 2017, defeat is a certainty on this battlefield.
Posted by Rollo at 15:33