I have noticed recently that where once there were red, yellow and blue bicycles which used to be littered around the city, they have now been replaced by green and orange bicycles in a brand new range of electric bicycle littering services. 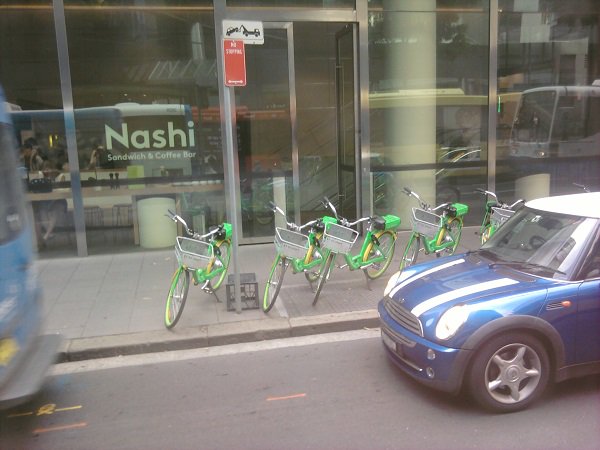 I would not be surprised if they were owned by the same companies; who also happen to own the private sanitation and rubbish removal businesses like Cleanaway; which I suppose would mean that they derive the bulk of their income from local councils paying them to clean up their damaged bicycles rather than actually renting them. My suspicions are further piqued in my private conspiracy theory by my ongoing observations that the number of actual meat bag humans that I have seen using these bicycles ever, is nil.

Apart from the fact that I think that Sydneysiders are just awful people (the reason why you are not allowed to have late night alcohol trading is because you keep on king hitting and glassing each other) and will throw bicycles into the harbour and put them up trees and bend the wheels, I think that the people who own the bicycles obviously do not live in Sydney and know nothing of the topology of the city.

Anyone who has in Sydney for any particular length of time will attest to the unavoidable fact that Sydney is very hilly. Unlike Beijing which is relatively flat, or London which is both flat and small, Sydney is a rollercoaster of land with changes in elevation everywhere and in the greater environs of the city this is reflected in the arterial roads, none of which are straight.
Even just a little walk from Wynyard to Town Hall Stations or from Town Hall to Central Station will very quickly reveal to traveller that the change in elevation is surprisingly immense; almost unduly so for a city in which you'd want to ride a bicycle, so not many people do.

This is indeed the problem then. The bicycles in a public space which although are branded as belonging to someone, may as well be owned by nobody at all because their owners are absent and no attempt whatsoever is made to secure their property. If these bicycles were stored in racks which were only unlockable by the app, I am sure that they would be treated with far greater respect than they are currently. I completely expect that they'd still be vandalised though, because the underlying cause that Sydneysiders are awful people would still remain.

I think that these bicycle littering services are hoping that by adding battery power that people will be more inclined to use them and that through that use that the sight of them will be normalised. Again, that's valid in a city where bicycles are already prevalent and where the people are more communal in nature but this is Sydney and where if bicycle use had been practical it would have already been normalised and we're all just a bit too nasty to want to share anything.

I don't know how many of these new battery powered bicycles there are but I do know that a non zero number of them will end up in Sydney Harbour. Perhaps Sydney Harbour is already so polluted that this is not a concern but if you were to propose to Sydney City Council that your business model involved throwing a thousand batteries into the harbour and leave the problem of clean up to someone else, I am sure that such a plan would be looked at with a very hard stare.
Yet this is pretty much exactly what has happened here. The first wave of bicycles just appeared out of nowhere and then slowly found their way into the urban environment as large pieces of rubbish and this second wave will come to exactly the same outcome except this time, the urban environment will now be littered with batteries; including batteries in the harbour.

If Sydney wasn't Sydney and was a flat place like Amsterdam, or a place in which the people were more community minded, and the bicycle littering services installed racks so that there was more of a proper sense of proprietorship over the bicycles, then these companies would be successful and there wouldn't be as many bicycles ending up in trees, draped over street signs and hurled into the harbour.
Posted by Rollo at 15:18