With the 2019 NSW Festival of Democracy now drawn to a close, with the Berejiklian Coalition Government returned to power with possibly a majority of nil, and with the Federal Election looming for either May 11 or 18 (I think that the 18th is more likely), the question that now needs to be asked is "what in tarnation just happened?" The answer is very close to but not exactly, three quarters of two fifths of bupkiss. 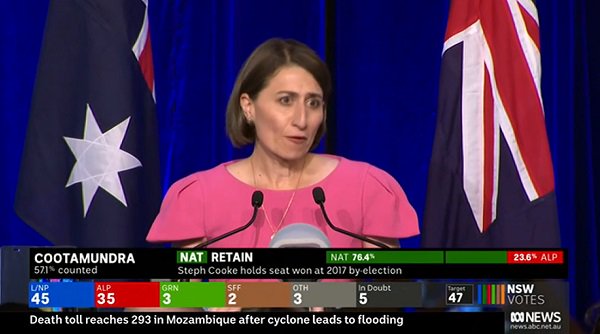 In the final wash up, it looks like the only two seats which changed hands were a National Seat to a Shooters and Fishers and another to Labor. Every other seat in the entire of NSW moved nowhere. There are 5 conclusions which might be able to be drawn from this:

1. People are generally happy with their local member.
This is a fairly good kind of answer because in most cases, the sitting member was returned to their seat. If electorates were unhappy, then they would have sent a different member to Macquarie St.
Unfortunately, that doesn't really help us answer the big question.

2. People are generally ambivalent about state politics.
In the grand scheme of things, people care about the big question of who runs the country and who takes care of their immediate problems like the bins and whether or not there should be a roundabout on the intersection of Banana Street and Pleasant Crescent. Even though this state government sold off the poles and wires of the state's electricity network and the ferries and wants to sell off the bus network, and put tolls on the M4, and gave the contract of building the M4 east to a consortium backed by the a former Premier in a staggering piece of corruption, and had the first Premier ousted because of another piece of corruption... that's still not enough for the people of NSW to change their mind.
In fact, several people that I know, didn't know even know that there was a state election on, much less who they should be voting for.

3. People are rusted on to their political party.
If you compare the electoral map for both state and federal governments, most of them in New South Wales haven't moved in at least a decade. On too of that, neither the electorate that I live in or work in have changed hands in principle, at both state and federal level ever. One has voted for the Labor Party since the inception of the party in the 1890's and the other has voted for the Liberal Party and its predecessors for an equally long time.
Australians are generally culturally conservative and really only move on social ideas and issues when the rest of the world has done so. The only reason that we had the franchise of women, compulsory voting and preferential voting in this country is by dint of historical accident. Inside that voting system, Australians in general and the people of NSW in particular do not have much in the way of progressive ideas and certainly not much of a progressive vision of the future at all. The Berejiklian Coalition Government although it is building infrastructure, is doing so about 60 years after it was needed and has come at the extra expense of selling other assets which we the good and fair people of New South Wales will never get back. But as long as our house prices keep on going up, we're mostly fine with it. It is an attitude of  "I've got my own, ha ha lol".

4. We are easily manipulated.
In the wake of 51 people being shot to pieces by a white supremacist terrorist monster, the people of NSW actually doubled down at the ballot box on their own racism and wish for more selfish violence. The Shooters and Fishers Party won an extra lower house seat and One Nation increased its vote and will most likely send narcissist supreme, Mark Latham, to the upper house.
The people know that they are being stomped into the ground by big business and especially the banks but instead of voting for politicians who might change legislation to try to curb this, they have lurched to cultural authoritarians who want to blame people of other.
Nevertheless, in NSW, between News Corp, Nine Entertainment Co. which owns both Fairfax as well as Channel 9, Seven West Media, and the Macquarie Radio Network, people were able to see Pauline Hanson on a fairly regular basis, Mark Latham on an almost equally regular basis, and when a video from several years ago surfaced which showed Michael Daley complaining that Asians in Western Sydney were taking people's jobs, it completely made people forget the almost identical comments that Ms Berejiklian had made about African migrants and the dogwhistling for almost three months about wanting to halve immigration levels.

5. Feminism is actually a political irrelevance (no really it is).
The racists and the nativist morons who don't care about the outcomes of people different to them, continue to not care. Ms Berejiklian is the first female Premier of New South Wales to be elected as leader of a party as opposed to becoming Premier part way through¹.
I don't know whether or not that that should be celebrated because it shows that this glass ceiling is broken, or celebrated because it is so unremarkable as to be passé. Between Angela Merkel, Jacinda Ardern, Teresa May, Annastacia Palaszczuk  and the returned Premier of New South Wales, Gladys Berejiklian, women have comprehensively proven that they are as inspiring, incompetent, good, bad, and indifferent as men, at running governments. I think that it is fair to say that there is no discernible difference between a female or male run government².
The actual difference is the men in the political parties. The Labor Party would probably be fine with say Senator Penny Wong being Prime Minister but the Liberal Party have a distinct woman problem and National Party are still getting a grip on the fact that women can be elected to parliament.

I don't think that Ms Berejiklian as the first elected female Premier of New South Wales is necessarily a good, bad or meh thing. In the long run, we either get choc-banana or banana-choc politics with a few fruits and nuts, and Ms Berejiklian's government is as flavourless as the ten which came before it.
Aw well.

¹The first actual female Premier of New South Wales was Kristina Keneally who inherited a chaotically run Labor Party and who never really managed to control the ship of state as it careened into the wharf of incompetence.
² I think that the last actually good Premier of New South Wales was Jack Lang. I also think that the last actually good Prime Minister of Australia was Ben Chifley. Both of them looked forward to a future which was going to outlive them when they were gone.
Posted by Rollo at 19:17