As part of Ms Berejiklian's train station maintenance scheme which began while she was still Minister for Transport and Infrastructure (and which only really seemed to extend to railway stations in electorates which voted LNP - hence reason why Doonside Station has serious rust issues and why it still doesn't have lift access), the railway stations from Granville to Seven Hills all had major renovations.
The most drastic of the changes was at Pendle Hill Station; which as far as I can tell, went from almost 1955 to 1993 without having anything done to it at all, when the ramp on the northern side of the station simply collapsed one day. That ramp was replaced and realigned but nothing else was done to the station until 2018 when the new substantial pedestrian overpass was built, save for the odd cosmetic changes like signage and whatnot. The basic core of the buildings at platform level remain unchanged. 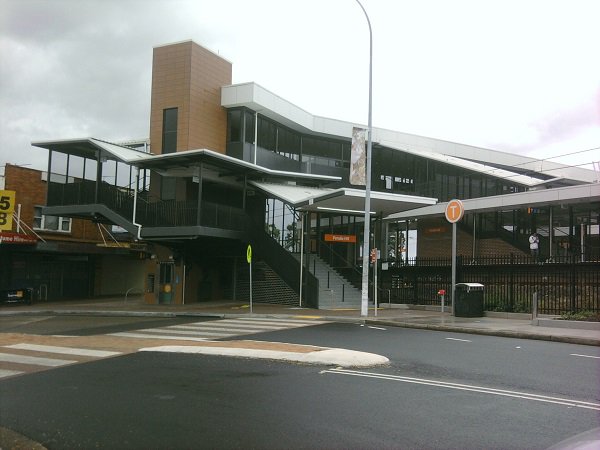 Like so many places in Sydney, Pendle Hill is named after a place in England. The suburb of Toongabbie which once upon a time used to encompass Pendle Hill, was the third settlement of the colony of New South Wales and has its founding date of 1790; which means that white people have been here for a very long time. As is white people's wont to rock up at a place and steal country through the cunning use of flags before renaming the place insensitively, Pendle Hill is named after a place in Lancashire which is most famous for being the site of witch trials in which the Witchfinder General found already marginalised women guilty of witching and had them executed.
Today, Pendle Hill is mostly populated by migrants who are the children of the remnants of empire and thus, the suburb has many people from the Indian subcontinent. Consequently, Pendle Hill has one of the most delicious smelling streets in all of Sydney and is one of the quiet jewels of the western suburbs. 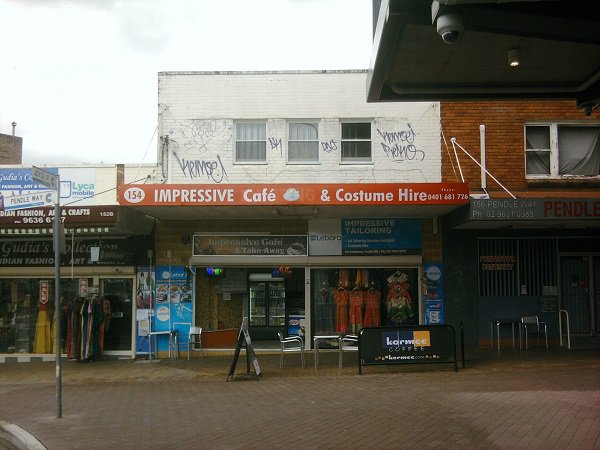 As I scoot forth and back to work, I whizz through at about 100km/h and have not had the opportunity to stop in a long time. When there was a chance to finally walk around and have a look, I took it.
One of those things that I see regularly but only fleetingly is the Impressive Cafe. I have to say though that I wasn't impressed enough to go in.

After the old pedestrian overpass was finally deemed to be a safety hazard, the new one was built at the western end of the station. It is in that same kind of sharp style that a lot of apartment complexes are being built in across Sydney; which I can only think is the result of the architectural computer programs that generate the plans. My suspicion is that materials and building supply companies provide textures and wire models of their products so that architects and civil engineers can insert them into CAD programs, which is why so many new buildings look similar. 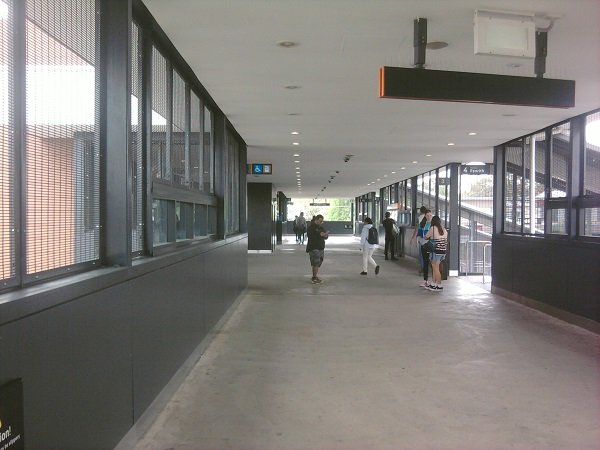 As this is a pedestrian overpass, there are no ticket machines nor are there any toilets or the stationmaster's office at this level. It feels very much like being in the space next to a car park. This is an example of unfriendly architecture, where the intent is to dissuade people from staying. This space is meant to be passed through and everything about being inside it screams that you are not welcome.
My immediate thought though was that if I was 14 years old and on my way home from school, that this is a government provided indoor football court. All the 'windows' are made of very sturdy metal screens which would allow a football to bounce off nicely. 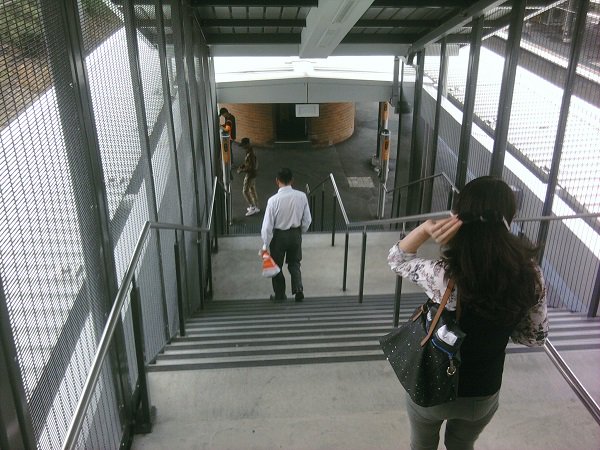 As I walked down the stairs to platform level, I was reminded of the former attraction at long closed and almost forgotten Wonderland, Scooby Doo's Silly Stix. The difference here though is that this is the unfunnest jungle gym in Western Sydney. 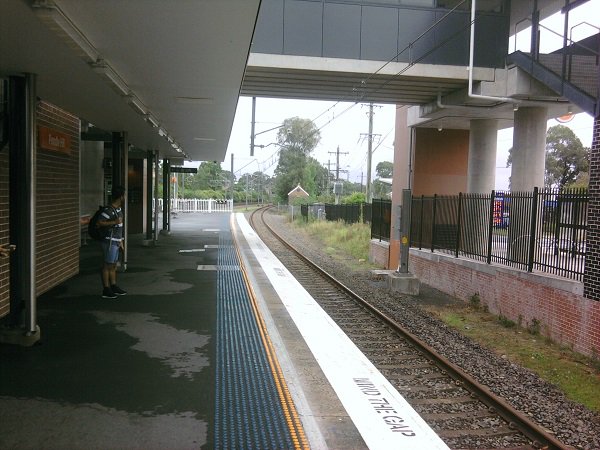 The view from platform level looking down the line is a reminder that this is still ordinary rolling boring suburbia. Railway lines by virtue of their existence are places where we can not completely scrape away nature. Suburbia often has bits of nature left over; especially along the edges of railway lines, where it is to expensive to build apartment blocks (for now). 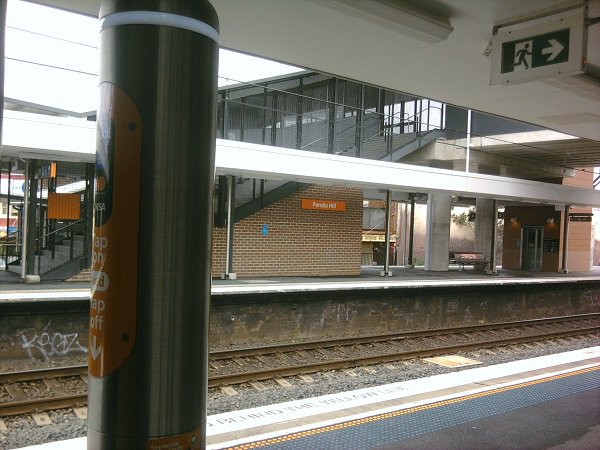 Looking back across at the westbound platforms, it is pretty obvious that this structure is meant to be imposing. It hasn't been finished off in brushed metal or had the screens painted green to take the edge off, but with black screens and slightly darker than necessary bricks. The are no round features like the old station building had and so for a building which will probably be here in 2069, it is the triumph of utility over style. Wentworthville Station which is the next one to the east, has lift towers which look practically identical, which says to me that this was done by the cheapest contractor. 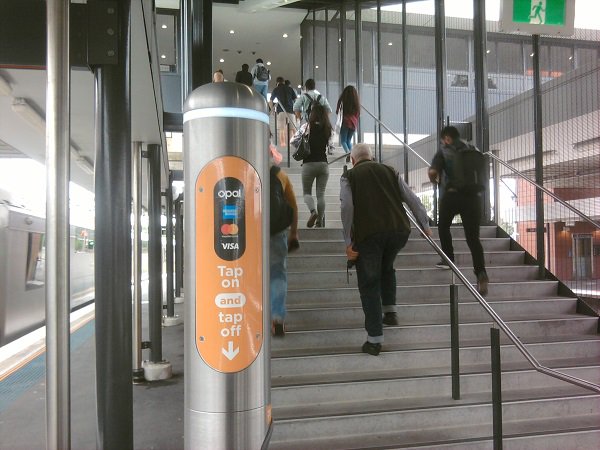 As if to reinforce the point that this is a place in which you are not welcome but must pass through, the view that one has when stepping off the train and past the passimeters, is like that of a prison. I imagine that at nighttime when the darkness closes in, that because light travels in straight lines, that the only illumination visible will be that of the building. Blacktown Station has glass windows so that you can see a wide vista. This vomitoria is very closing in aspect; very deliberately so. 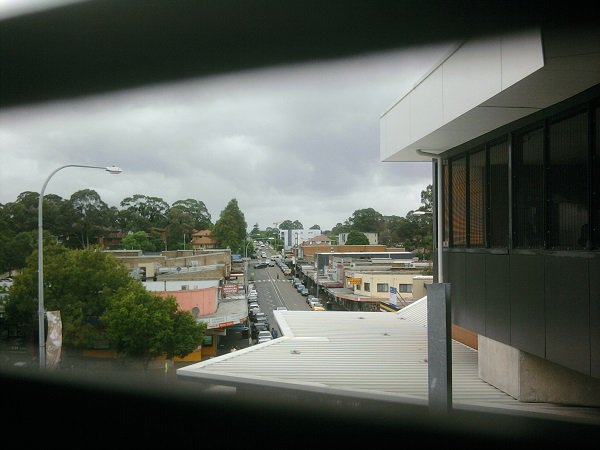 The old pedestrian overpass almost certainly needed to be replaced and/or have lifts installed. While this new one looks incredibly solid, it gives me the impression that it was done begrudgingly and is meant to be a scar on the suburb. Of course it could just be that this is a result of the computer programs and building materials available but either way, this is not a kind place.
Posted by Rollo at 19:17