Horse 2589 - Hooray For Australian National Flag Day, The Day Nobody Knows Or Cares About!

Let's hear it for Australian National Flag Day, yay!
Never heard of it? Good. That must mean that it's the most patriotic day in the year.

Australia doesn't have a national saint like St George, or St Andrew and so we have to make do with celebrating Invasion Day on the 26th of January, when the colony of NSW was proclaimed. As far as national holidays go, it's pretty rubbish because it truly isn't national; it's just that the racist zealots of Australia want to turn it into something. Nor can Australia point to a national founding day because the Commonwealth of Australia was started on the 1st of January 1901 and that date was already take by New Years' Day.
So that means that we have an actual national holiday which nobody cares about and a faux national holiday with racist overtones. Hmm. Good work so far.
That brings us to today, the 3rd of September; a day which has actually been proclaimed as Australian National Flag Day but because there isn't a public holiday in it, the so-called patriots, don't really give two hoots about it.

In 1901 Australia didn't really have a proper national flag; so we held the Federal Flag Design Competition; which attracted more than 30,000 entries. Most of them were variations on a theme and what we ended up getting was a defaced blue ensign with the Commonwealth Star and the Southern Cross. The flag which won the competition had 6 points on the Commonwealth Star and this is what was in use from 3 September 1901; as sent up the flag pole by Prime Minister Edmund Barton¹. That flag was 18 by 36 feet; which I have to say is pretty massive for a flag. The seven-pointed commonwealth star version was introduced by a proclamation dated 8 December 1908. 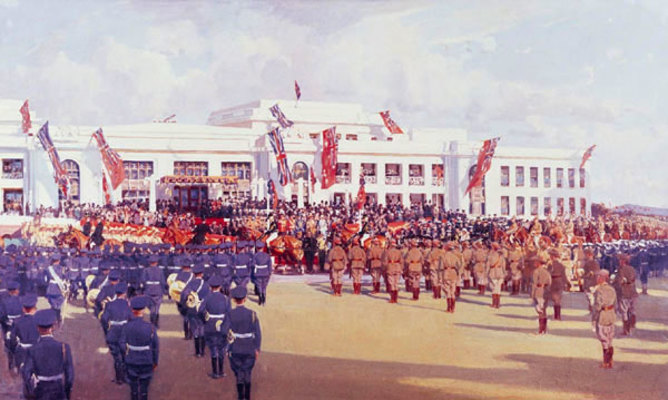 Even then, there was still argument about whether the Australian Flag should be a defaced blue ensign or defaced red ensign, this is evident even as much as 26 years later at the opening of the Parliament House. It wasn't until the Flags Act of 1953 which actually specified that the Australian National Flag should be the blue one and not the red one:

http://www6.austlii.edu.au/cgi-bin/viewdoc/au/legis/cth/consol_act/fa195361/sch1.html
1.  The Australian National Flag is a blue flag, and the Australian Red Ensign is a red flag, the design of each of which is specified in clause 1A.
- Schedule 1. 1. Flags Act 1953

Curiously, the flags act mentions that people still have the right to fly the Union Jack:

Nobody continued to give two hoots about if Australia even had a National Flag Day until John Howard¹ came to power in 1996. As part of his wave of rewriting of symbolism as is the want of every incoming government, he advised the Governor-General that there should be a day and Sir William Deane³ declared on the 28 August 1996 that the 3rd of September should be officially established as Australian National Flag Day. Again, nobody proceded to give two hoots about it.

I really love the fact that the only reason I found out that there was a Australian National Flag Day was because 7 people were outside in Mosman Square raising the flag. Just to underline the stupidity of this faux show of patriotism, the flags which were already sent up the flagpoles as they are every morning, were brought down and sent back up again.
I love the fact that nobody knows who the Governor-General is. I love the fact that the most important parts of Australian patriotism, lie on the sporting field. The Baggy Green Cap, the Green of the Kangaroos, and the gold of the Wallabys, the Socceroos and the Matildas are more important to us as a nation. I love that the last Saturday in September and that Sunday in October are more important than an anonymous flag day, which a government proclaimed but was too poxy to give us a public holiday for.
I love that I had no idea that to today was Australian National Flag Day because that truly is the most Australian Australian thing of all