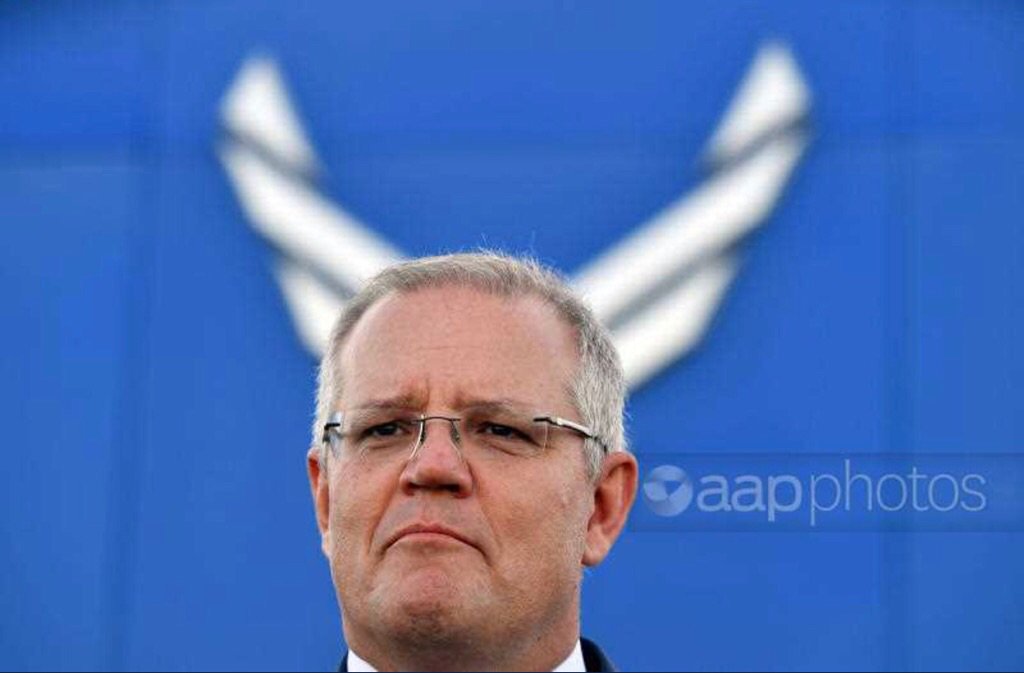 - via the Australian Associated Press

It came to light through a leak from the White House that the leader of the Hillsong Church Brian Houston was going to accompany the Prime Minister Scott Morrison on his current trip to the United States.
The obvious question that I have, which the media doesn't yet appear to be curious enough to ask is 'Why?'. It is one thing to merely report this but since the veracity of the truth is already hard to pin down, perhaps asking the question without a full compliment of facts (some of which are denied or not denied by the players in this game) is simply too hard. 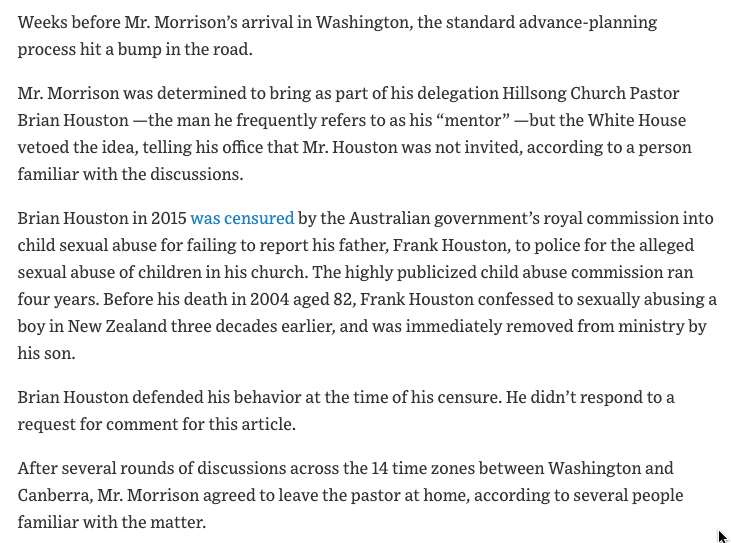 To be honest I find the whole doctrine of the prosperity gospel troubling. The doctrine preaches that if you are blessed by God then you should be joyous and grateful but if you then turn around and suggest that someone isn't being blessed because they specifically deserve not to be, then that moves you onto deeply problematic ground.
The prosperity gospel, would have you believe that wealth and happiness are always the result of the will of God and that if you do not have them, then it is your fault and you have somehow fallen out of God's favour.
If people get blessed because of something that they've done, then what about those people who suffer because of what other people have done? How wealthy you are is very much a lottery and based upon the family that you were born into. People who are born into privilege and advantage have a considerable head start on those who have not. All of the hard work in the world by someone in a $60K job, is not going to overcome the rewards due to someone else who has a chunk of capital worth $1¼m at 5%. That has nothing to do with the amount of work that the first person does.
What of the people who suffer because the world is simply cruel or indifferent? The prosperity gospel has nothing to offer them other than blame.

Blaming poor people for being poor fits nicely with both the indifference of capitalism which places a price on everything but values nothing and especially r not people. It also fits nicely with the myth of the meritocracy that says that rewards go to people because they deserve it. I can very much understand why the economic right would like such a set of things.
Hillsong Church, which dates from the early 1980's era 'greed is good' was founded by Brian Houston, who literally wrote a book called "You Need More "Money"; and it precisely him who Scott Morrison wanted to accompany him on this trip to the United States.

This was published originally in the Wall Street Journal but I find it curious that News Corporation newspapers in Australia and that the ex-Fairfax newspapers of The Age and Sydney Morning Herald only reported on this after they had learned about it from the Wall Street Journal. I find it even more curious that Mr Morrison when asked about it, repeatedly said that he wasn't going to 'respond to gossip' on the subject. The leak to the Wall Street Journal came from a source who they have no intention of disclosing but Mr Morrison saying that he wasn't going to 'respond to gossip' isn't actually a denial of the leak. The thing about gossip is that just because it is gossip doesn't mean that it isn't true. Mr Morrison's non denial is probably tacitly agreeing with the gossip because that means that he doesn't have to explicitly lie and then face criticism if substantial proof comes out later.

The fact that a politician has a faith and acts upon it isn't of itself worrisome. I think that we would all appreciate if a politician who was motivated to do something to uplift the most vulnerable of society, or improve the lot of poorer people, actually acted upon their faith. Once upon a time we may have even called such politicians 'principled'. Undoubtedly Scott Morrison is a man of reported faith but the problem is that his policies as both Immigration Minister and now Prime Minister make me wonder about what sort of doctrine that he is following.

I think that it is a long accepted tenet of liberal democracies that there should be a separation of church and state. Most famously this is expressed in the first amendment to the US Constitution but here in Australia, it finds its expression in Section 116 of our own Constitution. I am not suggesting a formal enmeshing of church and state is going on here though.
The thing that irks me about Me Morrison wanting Brian Houston to accompany him on the trip to the US, is what the intent actually was. It is not the separation of church and state that I am worried about but the co-opting of the church by the political right, to satisfy a need to formalise power.

In the United States, a Baptist Minister named Jerry Falwell formed an organisation called 'The Moral Majority' which had the express purpose of weaponising the Christian Right in the United States, to organise and undercut the sitting President Jimmy Carter (who was also a Baptist). In doing so, The Moral Majority went into churches to drum up support for Ronald Reagan and he was elected twice.
This was all set against the backdrop of Falwell's Liberty University fighting the IRS for tax exemption status for not quite 5 years at that point, and the more general climate of cultural change in the United States. I am reasonably sure for instance that the topics of same-sex marriage and abortion, became clarions to shut down people's thought processes about what the US Government was actually doing rather than bother to engage in proper policy, round about this time in US political history.

Now I mention Hillsong because it stands as a kind of analogue now that Australia is undergoing roughly the same sorts of cultural and political changes albeit forty years later.
We've seen the right of the Liberal Party lose the cultural fights on the issues of same-sex marriage and abortion in Australia; while at the same time Hillsong has been very cozy to the party. Hillsong's current megatheatre was opened by the then Prime Minister John Howard; when I was still at the Commonwealth Law Courts, Hillsong was fighting the ATO in the Administrative Appeals Tribunal to decide upon its tax status (which was eventually personally diffused by the Treasurer Peter Costello); and the current Prime Minister Scott Morrison attends the Horizon Church in the Sutherland Shire which is at least somewhat affiliated with Hillsong to some degree (I know not how exactly).
The only reason that I can think of as to why Mr Morrison would want Brian Houston to accompany him on this trip, is to meet various church leaders in the United States who have already been successful in co-opting the church to provide votes to the right; which very much explains why the core and base of Mr Trump's voters are prepared to put up with and ignore actions and rhetoric which the church under normal circumstances would never find tolerable. How else do turn the hearts and minds of the church to chastising the vulnerable in the name of national security?

I already found Hillsong's practices somewhat dubious. Apart from Hillsong's business practices, Brian Houston was named in the Royal Commission into Institutional Responses to Child Sexual Abuse because of the cover up of the actions of his father. If the outside world looks on horrified and quite rightly questions the credibility of Hillsong, then watching on as its leader is named in a leak by the White House, aught to put the churches in Australia on alert.
The world at large already finds the co-opting of politics by the church problematic; I think that the church should find its co-opting by politics even more so.
Posted by Rollo at 19:17