Horse 2593 - Five Get Into A Series Of Complex Legal Questions

Somewhere on my Facebook timeline was mention of the 1958 book by Enid Blyton "Five Get into a Fix". I remember reading this (and indeed all of the Famous Five canon) when I were a wee lad; so the story was not unknown to me.

The plot is as follows. It is just after Christmas and Julian has a cold. Julian's mum sends them to a farm in Wales so that they can recover.
Cue a creepy house called "Old Towers" a bunch of strange noises, a note which says “I’m kidnapped in my own house. Please call the police”, some kidnappers and a mine for some precious metal with magnetic properties; without the owner's permission under the house.

The comment on Facebook said:
"I think the Famous Five really jumped the shark when they discovered an entire illegal mine operating underneath an old lady’s house."

The fact that there is a mine operating underneath an old lady’s house did not strike me as particulatly odd. I already knew that there were lots of old mines underneath a bunch of houses Oop North.

https://www.yorkshirepost.co.uk/property/homes-gardens/is-your-home-at-risk-from-mining-subsidence/?fbclid=IwAR00UyoF1nrLTQXN48skKOo_uEXPJKh-rFZFDGdgCTgt9lgQY8nWSy0nqVc/
With all the UK’s deep coal mines now closed, you could be forgiven for not giving them a second thought when buying a property. However, mines have left a potentially harmful legacy, as many homeowners across Yorkshire have discovered.
Nearly one in three of our properties sit above coalfields. Although most houses will not have any problems, the sheer scale of mining over the centuries means costly and even dangerous structural damage due to mining is far from unheard of.
- The Yorkshire Post, 30th May 2019.

In fact there are so many old mines underneath a bunch of houses Oop North, that mine subsidence is a problem. Handily though, The Coal Authority has a website do that lets you do a search to see if the propety in question, is affected by old holes in the ground: 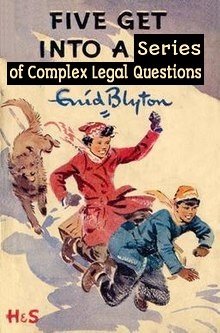 As far as I can make out, with the exceptions of oil, gas, coal, gold and silver, the Crown does not own mineral rights in the UK. This is different to Australia, where you will need a mining license even if you want to set up a mine underneath your own house. One of Australia's most fanous disputes, the Eureka Stockade, had to do with the issuing of mining licences and the rather strange scenario that miners wanted to mine for gold, on other people's land for the most part.

In the UK, minerals right are not held by the Crown but by private ownership. The details on mineral righte for any given property are held by the Land Registry Office together with details of land surface ownership and this is where the story gets insanely weird.

The Town and Country Planning Act 1947 didn't change the fact that they rights to mine land are vested with the property owner but that you needed planning permission for development to extract:
"all substances in or under land of a kind ordinarily worked for removal by underground or surface working, except that it does not include peat cut for purposes other than for sale"

The mining rights remain vested with the owners of the land, which includes everything beneath or within it, down to the centre of the earth but the development values were vested in the state; with up to £300m set aside for compensation of landowners.

The question of who is the landowner, is even more complex.

A lot of places in the UK, have perpetual leases upon them. Most of Manchester for instance is owned by the De Trafford Baronetcy. Edmund Trafford incidentally, had the title of "The Alchemist" because of the licence issued to him by Henry VI in 1466, which authorizing him to transmute metal. There are loads of these arrangements in the UK; where someone owns their house and pays ground rent to some great estate, usually for some peppercorn amount like £50 per year.

I have no idea if the Old Lady who owns her house, actually owns the superior land title under it; so I do not actually know if the mine operating underneath the old lady’s house is actually illegal or not. Since we are not privy to the series of ownership arrangements, the mine underneath her house could well be legal.

Kidnapping on the other hand is a common law tort in England and Wales; which means to say that that part of this story could very well be the only infringement of law here.
Posted by Rollo at 21:58