I know that this is incredibly late to the picture, like I have arrived at the cinema half way through a movie and am asking about what happened but we need to talk about Wayne Rooney.

Wayne Rooney burst onto the stage of football at the age of 16, with a stellar opening season at Everton. At the time people wondered if this was going to be one of those cases where someone burns brightly and then immediately fizzles out but he got better and better and Everton sold him to Manchester United for many millions of pounds; where he helped the club win championships and cups. He then went to the elephants' graveyard that is American Major League Soccer, and has returned to play out the twilight of his career at Derby County Football Club where it is expected that he will transition into coaching and management.

One of the things that has happened to English football over the last decade or so, is the rise of internet gambling and spot betting. Once upon a time, football clubs carried the logos of kit sponsors of companies that made electrical goods, potato crisps, beer, car manufacturers, and the like but in the second decade of the twenty-first century, a lot of these have been replaced by internet gambling companies. It is now possible to watch a football game and gamble on that same football game, while gambling on various things happening in that football game, using the app of the kit sponsor of one of the clubs in that football game. All the while, the whole thing is yelling "Bet! Bet! Bet! Bet!"
The problem with all of this is that in having gambling companies sponsor football clubs, they rob the mortgage and rent and the food from the tables of the very same people who would watch football. English football in my lifetime has gone from the sport of the working class, to an industry which is built on the backs of losers and has become the plaything of billionaires. After having money flood the game which drove up ticket prices, the internet gambling companies found a way to take the money out of the pockets of the people who had been priced out of the game.

This all brings me back to the tale of Wayne Rooney. Derby County Football Club is sponsored by the gambling company Red 32. The name of that company alone is almost naked in its intent as it evokes a slot on a roulette wheel. It came to light that part of the conditions of Derby County Football Club signing Wayne Rooney, which they shouldn't normally be able to do because he would be too expensive, was that his contract was bought directly by the gambling company Red 32. In exchange for Derby County Football Club effectively getting him for free, part of the terms of the agreement was that Wayne Rooney would play in the kit number 32.
Now I know that money has been floating around in the world of sport since ages ago and there was even the case of a chariot driver being bought by a chariot team for more than a million aurii but even I have to concede that there is a moral limit somewhere. 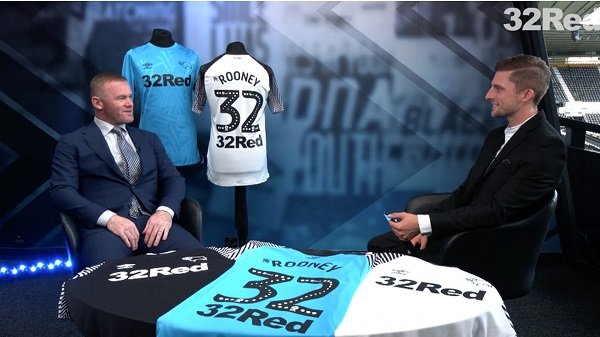 I say this in complete hypocrisy because as someone who likes watching an even more expensive sport than football, namely motor racing, the idea that numbers and colours can be bought by companies is completely normal to me.
Team Lotus famously changed their colours in Formula One from British Racing Green to the colours of tobacco company Gold Leaf and became Team Gold Leaf Lotus for a while. Right throughout the 1970s, 80s and into the early 90s, cigarette sponsorship was all over everything in sport.
For a while, we had the rather strange situation of Peter Brock driving for the Holden Dealer Team which was sponsored by the Marlboro cigarette company but who personally ran the number of 05 which was sponsored by the Victorian State Government as an anti drink driving campaign. Drink driving is bad but smoking is good?
There were a bunch of sporting series where cigarette companies had bought the name of the competition, like the Winfield Cup, the Winston Cup, and World Series Cricket ran the Benson and Hedges Cup.

I don't really have a problem with raw naked capitalism buying the colours and numbers of sporting events and teams but there's something just a little bit off with Red 32 paying for Wayne Rooney to play in kit number 32 in a club which they sponsor. It's even more horrid when you are also selling replica kits to kiddiwinks, for whom betting on everything becomes normalised; who can't afford the ticket prices and have been locked out of the game.
Gambling in some cases is as addictive and destructive as cigarettes and alcohol. The world kind of came to an agreement in the 1990s that cigarette sponsorship in sport was a net bad thing and it was banned. I do not know if time will tell if gambling sponsorship in sport will be banned or not but even if it is not, there is something crass and gauche about Wayne Rooney playing in kit number 32 because a gambling company wants him to.

The purist in me wants to say that kit numbers belong in the realm of myth making but I am not so naive to think that that's true. Granted that sporting heroes are associated with their numbers such as Michael Jordan 23, Wayne Gretzky 99, Babe Ruth 3, Peter Brock 05, Dick Johnson 17, Nigel Mansell Red 5, etc. but when you are selling gambling to extract money from the people who used to be your fan base but have now been locked out because of money, that seems insidious to be.
Posted by Rollo at 07:17