This year's Bathurst 1000 was won by Scott MacLaughlin and Alexander Premat in a DJR Penske Mustang fairly convincingly. The car with MacLaughlin at the wheel took the lap record, qualified on pole position and then won the race on Sunday. This is in the context of a season in which Scott MacLaughlin will probably also be the Supercars Champion for 2019 and DJR Penske will take the teams championship.
While winning a championship is good, winning the Bathurst 1000 is special. Winning a championship allows you to put the number 1 on the car for the next season. Winning Bathurst on the other hand, allows you to put your name into legend. Alan Moffat once said that the rest of the touring car championship was just a warm up for Bathurst.
With all that by way of background, what we saw at Bathurst on Lap 135 of 161 starts to look a bit sinister; and the Supercars organisation also saw it as looking sinister. 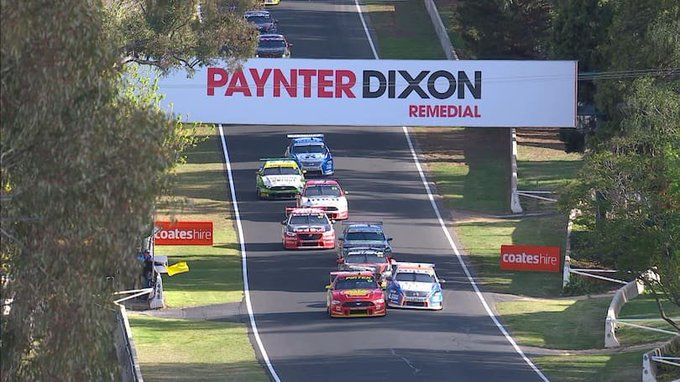 Fabian Coulthard who was driving the #12 DJR Penske Mustang, held the field back some thirteen seconds behind the leaders, during a late safety car period. At the time the crew chief cited that the car was having overheating problems and that holding it back would let cool air to pass through the radiator and dissipate the heat. Naturally the Supercars organisation saw this as a ruse and said that they would investigate this after the race.

Holding back the #12 Mustang just happened to have the benefit of letting the #17 Mustang time to pit, get a new set of tyres and fuel; so that it didn't have to worry about stopping before the end of the race. What DJR Penske didn't want was the second of their cars coming in directly behind the first one and wasting time by just sitting around waiting in pit lane.
Of course this also applied to the Triple Eight Engineering team who also would have had the same problem but because they weren't responsible for the infringement, they will walk away from this in complete impunity.

The Supercars organisation eventually cited an infringement of Rule D24¹ which states:

D24.1 Team Orders
24.1.1 Means an instruction to a Driver or Team member, either verbal or otherwise the effect of
which may interfere with a race result.
24.1.2 It is not permitted for any sponsor, supplier, entity or related entity, including an Automobile
manufacturer, importer or their representative to impose or seek to impose Team orders,
on any Team.

In addition, there is the supplemental rule¹:
14.2.5 Any post-race Penalty imposed for breaches of the Rules during the race, other than the
penalty of a monetary fine, will be imposed on both Drivers in that Car.

I am a firm believer that as motor racing already is a team sport, that the team owners should have the right to order anything that they like. Since banning team orders invariably leads to secret codes being used, just so that the officials can not pin down that there were any team orders, then it makes sense to me to just drop the whole pretense and just admit that it is rampant. In principle I have nothing against DJR Penske declaring any weird team orders that they want.
The problem that I do have with DJR Penske is that they ordered Fabian Coulthard to hold the field up; deliberately, to create enough space on pit row to prevent double stacking of their two cars.

Already I find the idea of double stacking ludicrous. I rather like the idea that NASCAR has where you have dedicated crews in dedicated spaces for the cars. Teams in NASCAR seem to survive perfectly well with the further restriction of only having six people allowed over the pit wall at once as well. Supercars already take up voluminous amounts of space across double and triple garages; so I really can not see why if a NASCAR operation which might be running as many as four cars should find it easy to bring all four cars in at once and yet Supercars teams can not.
In addition to this, I find the reason given by DJR Penske for holding back the #12 car of Fabian Coulthard, as flimsy as if you built a cruise ship out of tissue paper. It floats for a while but there is no way that it holds water or stands up to testing.

If I was Grand Poobah and Lord High Everything Else then I would have called DJR Penske's bluff and black flagged their car on the next lap of the race and then cited their own reasoning for holding the field up. By their own admission, they had a car which wasn't capable of holding speed; and if they wanted to fight the case, then I would have then black flagged the car for deliberately holding the field up. I would have then held the car in the pits for 15 seconds as a penalty.

Unfortunately, the Supercars organisation didn't enforce any penalty at the time, which is silly to me; so now they have to go through some sort of arbitration committee meeting.
Supercars will probably cite rule D24 in the technical manual for car #12 rather than stripping the #17 car of Scott MacLaughlin and Alexander Premat of their win (which the Daily Telegraph is crying all kinds of coloured murder about) and add a penalty of 90 seconds of time to the race result of the #12 car. Thus, it will be pushed back to about 106 seconds behind the winner and be credited with a corrected result of 13th. DJR Penske will probably also have to pay some monetary fine for their deliberate knavery.

I have heard argument that even if the #17 car suffers no penalty and is allowed to keep their win (because that car wasn't actually the car which infringed upon the rules) then their win win be tarnished. I say nay. History doesn't really work that way². The long view of history writes things into the past as a point of academia and discussion. Unless the organisers actually decide to strip the victory away, then history will be kinder in the long run, than the media which needs to stir up intrigue in the short term to sell copy.

Aside:
I think that 26 cars in what is supposed to be the biggest motorsport event in the country is an unfunny joke. There are 36 double garages at Bathurst; which means that pit lane can accommodate as many as 72 cars. Back in the old days before Supercars decided to close the shop with their Racing Entitlement Contracts, there were as many as 56 cars at Bathurst. The event now is far more corporatised and when you are at the track, it is far more fan unfriendly and restrictive (unless you have money).

Considering that Super 2 was already there and running a 250km race on the Saturday, I think that there is a good case to be made to allow Super 2 into the Bathurst 1000. The cars are older spec and in every single case, were ex-Super 1 cars (assuming that the Supercars Championship wants to give those cars a number). Those extra 16 cars would give more drivers a chance to have a go.

As for the argument that Super 2 or even Super 3 would be too slow, I reject that entirely. If you applied the FIA's 107% rule, then that would have given you a cut off time of 2m 11secs and the entire Super 2 field was within that.

If you consider that the full-time drivers are supposed to be better, then it should be expected that they would have the necessary skills to pick their way through traffic. I refuse to believe that in the days when you had a Ford Sierra which was doing 307km/h at peak and it came across a Toyota Corolla, that the Corolla driver wouldn't have had a very real and serious sense of self-preservation and wouldn't have wanted to get out of the way. At any rate, we had Chaz Mostert try to throw his Mustang into a space that it didn't fit, going into the Chase, which says to me that the amount of professional bravado which exists will still cause accidents among full-time front line drivers.
Posted by Rollo at 07:17