Largely because I am a forty year old male who in theory has a higher amount of disposable income because of the benefits of the patriarchy, and because I like Top Gear, Mythbusters, Scandi Crime dramas, documentaries, and the like, the algorithms which tell the streaming television services who is watching, seem to think that I will buy expensive cars and the latest technological dooverwackery and lots of them. SBS On Demand in particular, wants to sell me the new iPhone 11 with the trypophobic three cameras.
Don't get me wrong, I like advertising. Advertising is part of the necessary contract which means that I get to watch stuff that other people have made and that other people have paid for (the advertisers). What I don't think that the advertisers get though, is that I am not likely to throw down a lot of coin for the latest tech. I suspect that I am the kind of person who tech companies hate. Although I like the idea of new technology, I am so far towards the back of the tech upgrading queue that by the time I get around to replacing anything, every improvement is always light years ahead of what I previously had.

Over on the social media platforms, I see people who haven't been paid brag posting about their new Samsung Galaxy iPhone Nokia Sony S14 with 512-bit waffle iron computing, 4 cameras with 20.7 megapixels, and USB 4.2 Lightning or whatever and I think that that's all fine but I ain't ever gonna need it.
I am someone who had a black and white analogue television until the signals stopped, who had a valve amplifier with quatravox until it finally died, and a microwave oven from the late 1970s which is still in perfectly good working order. If a device works then as far as I am concerned, it doesn't necessarily need replacing. I am a big fan of the proverb that the fastest way to double your money is to fold it in half and put it back in your pocket.
The phone that I do have (because I am not a complete troglodyte) is a Samsung GT-S5511T and I am amazed that it has a camera and a colour screen. That's already more than sufficient for me because my only requirements for a phone are that it makes phone calls and can send and receive text messages. As for my phone itself, it has been dropped a lot, is covered in scratches but keeps on keeping on. 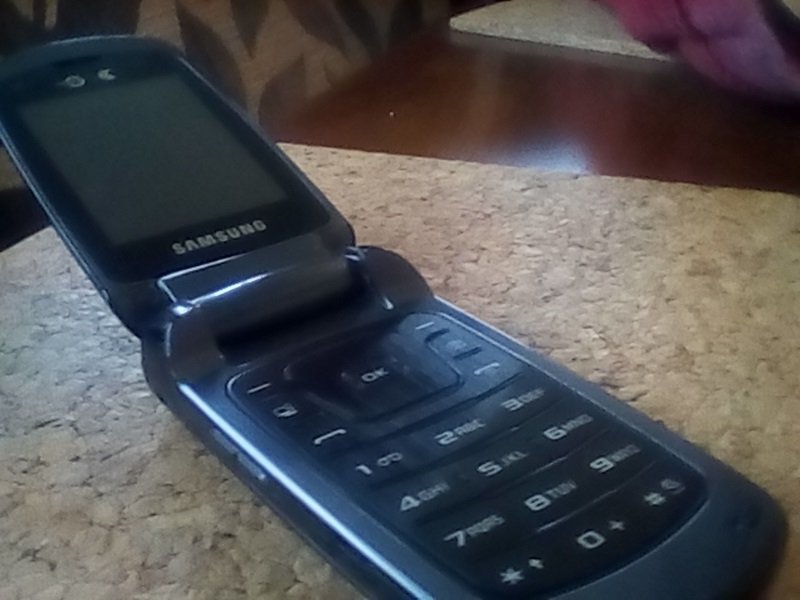 What I find amazing is that people are amazed that I have such an 'old' phone. Speaking as someone who has had four phones this century, I already find that to be scandalous and think that that's morally already three phones too many. The truth is that I am more than content with the technical wizardry going on inside my pocket and I survive quite nicely without needing anything better. Good enough is good enough. Not only that but good enough exceeds my expectations many many times over.
It happened recently that I had to take a telephone call during another meeting because our email server had gone down. I took my phone out of my pocket, sent a text message and then put it back in my pocket. Someone wanted to look at the phone after the meeting and I think that I could see an almost puzzled look upon their face as they couldn't believe that I have a phone which would have been pretty amazing in 2006 but is old hat now. I still think that the entire concept of a mobile telephone is pretty amazing and I wonder at the age that we live in. I live in the world that 2001 A Space Oddessy and Star Trek predicted; so I don't know how one can be that complacent. We walk around with the future in our pocket and we're bored with it.

It is with a great deal of irony that I type this on a 7 inch tablet which cost less than eighty dollars. I mention this because already have a device which does everything that I ask of it and which is bigger than the iPhone 11. I can use Wi-Fi on it but because it doesn't have any telephony circuitry, I can not make phone calls or use the device to ride on the mobile phone carrier networks. Likewise, I can not go on the internet with my phone and that's fair enough. The two devices serve separate functions that that's perfectly acceptable.
Most people on the train will have their mobile phone which they can access the internet with and where they will get adverts for the new iPhone on a phone which they already have and probably doesn't need upgrading, I have a phone which is so old that I can not receive the adverts to upgrade my phone despite me being the one person on the train who would probably benefit the most from upgrading it.
I am not anti technology but as someone who has the least technologically advanced phone out of anyone I can immediately think of, it might look that way.

Within my pocket I have more computing power than what took twelve clowns to the moon. My 7 inch tablet has a touch screen and enough space to hold hundreds of hours of music and/or many hours of video. It is mind bending to think that after I have finished writing this piece, I will probably be watching motor racing on my tablet. It is more mind bending to think that people are surprised that I don't really want to spend $1900 on a device, which doesn't really provide any conceivable benefits that my existing devices already cover more than brilliantly. I do not know under what circumstances I would consider buying a new device that I really do not need, which costs more than a cheap second hand car. For the same amount of money, I could buy an old Astra and drive around Australia. Still, people think I need a new phone. Why?
Posted by Rollo at 07:17