I like watching motor racing. Though as someone living in Australia, where the rights to just about every sporting code have been locked up behind a Murdoch pay-wall, motor racing is not necessarily a friend to me anymore. For instance, I find it crazy making that there were more Australian Touring Car races shown live on free to air television on the ABC in 1983 than Supercars races shown on free to air television in 2019.
However over the past few years, NASCAR has decided to go with the option of posting entire races on YouTube after the race has already been broadcast on Fox Sports and NBCSN (usually about four days later).

The last NASCAR race at Talledega Motor Speedway was delayed after being delayed by rain. The race which was started on Sunday 13th was completed on Monday 14th. In any other racing series, they would have either called the race short or more sensibly, put on rain tyres. 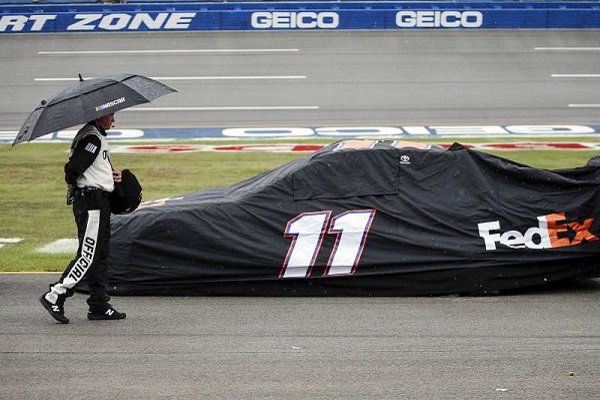 Those of us out here in the real world, regularly drive on treaded tyres because we can not afford several sets but cars on racing circuits will usually run on smooth slick tyres so that the contact patch of rubber on the road is maximised and they will have better traction.
NASCAR in its wisdom doesn't even have wet weather tyres and when I posited the suggestion on a forum that  the   mess at Talledega could have been sorted out if they had a set of working wet weather tyre compounds for a Superspeedway, I was met with confusion and derision.

If an engineer was able to figure out a tire compound, to be able to displace water in such time, that keeps the car not only to grip the road and remain stable enough to keep grip to the road, prevent it from hydroplaning, and last long enough to run a 500 mile event?

Now admittedly, I don't actually work for a tyre company but It appears to me that in principle, this should be a solvable problem with basic maths.
I am not an engineer and so I can easily be accused of blowing tyre smoke but an engineer is someone who can imagine the world without having to suffer the horribleness of actually going there and unlike a theoretical physicist, they have the superpower of being able to turn their imaginings into genuine actual real world stuff.

The problem appears to me to be resolvable to where forces go. A force is a vector quantity; which means that it has both magnitude and direction. If you have directions, then you can add them all together and do basic trigonometry on them. Ha! This looks more like a problem which I can deal with because as an accountant, dealing with numbers is not a lot different except that dollars and percents are scalar quantities and not vectored.

The normal force of a car going through a corner is always perpendicular to the surface (which is pretty obvious because as the wheels push down, the surface pushes back). If you resolve for that then the equation for the ideal velocity of a car going around a banked track is:

where:
v = velocity
r = radius of curve
g = force due to gravity

∅ = the angle of the banking

Note that in that equation, there are no force parameters; which says that any forces which do exist are either friction with the surface or unaligned shear forces. We already know that under dry conditions,those unaligned shear forces are already calculated and managed by virtue of there already being tyres which currently accommodate for them.

If you ignore friction with the surface or unaligned shear forces (because they're not actually contained within the equation), then I figure that the theoretical ideal velocity of a car going around the two big speedways is thus:

Tyres on the cars currently fall well short of those speeds; which means to say that there will in fact be shear forces which exist as cars turn and slide across the surface.

If cars already have to go around a superspeedway and they already make tyres to do that job, then in principle I do not see it as much of a stretch to develop tyres to do a similar job in the rain.
The question for me then is, can a tyre company invent a tyre compound to displace 60L/sec assuming a contact area of 240cm², for a car which weighs about 1500kg and which will do 350km/h (to exceed the operating specifications)?
To which I was told.

It's stupid. It's illogical. It's impossible.

I do not believe this.
Impossible sounds like it might be a thing but considering that tyres already exist on similarly sized cars which already solve for the rain problem, that simple does not hold water.
Illogical sounds like it is not a thing at all considering that I have already walked through the logic (see above).
Stupid might very well be a thing but coming back on Monday sounds even more stupid. Motor racing drivers are skilled employees and while Ido think that efforts should be made to improve safety, they are not so unskilled as to be unable to drive in the rain. A lot of them came from dirt track racing; many of them probably drove back to their hotels in the rain.

A tyre in NASCAR is made to the specifications of 300/54R15 where as a Supercar tyre is 300/32R17. As the front surface is in both cases square and the Supercar wet tyres are already made by specification to displace 80L/sec at 350km/h,then they are already up to the task.

The tyres in the Supercars Championship more than adequately solve the aquaplaning problem and as for the durability problem, tyres in NASCAR already do not go 500 miles so that claim was either just a little bit spurious or hyperbole. 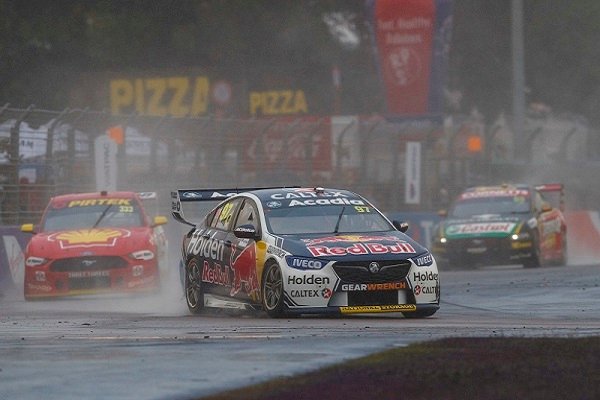 The only real issues that I can see are those unresolved shear forces, which given thicker sidewalls, should be easily overcome. Dissipating heat is not really a problem as rain tyres run on wet roads and the challenge is often to bring the tyres up to temperature. The technical problem of channeling water away has already been solved by similar spec tyres and asforthe question of running on a superspeedway, the meat bag with a bioelectric computer on board (ie. the human) who drives the thing, should be reasonably adept at working out how to get around in the rain.

I do not think that engineers are not up to the task. In my experience engineers are all pretty cluey and between engineers and production and service people, 95% of all the value of everything in the world is produced. That only leaves sales and management as the ones in the way.

It ain't happening, and no one is going to waste time and money on Oval Rain tires.

Aside:
NASCAR in its list of proposed changes for Gen-7 in 2021, will be switching from 15 inch rims to 18 inch rims; which is possibly similar to the Supercars Championship which may go from 17 to 18inch rims. It will be curious to see what the next steps are going forward.

Second Aside:
I had a chat with one of our clients who works for Pirelli. He thought that the problem of aquaplaning showed itself more when a car was braking because the loads through the car tended to push forwards which mean that the front tyres have to work harder. We already know that you should put new tyres on the rear of a car because better traction at the rear prevents spins but seeing as cars in NASCAR already have a big rear wing and on a superspeedway the angle easily exceeds the upper limit of 4% crossfall that you would find on normal roads, it means that you shouldn't get as much standing water on the road surface. He thought the design question would actually be easier.
Posted by Rollo at 07:17