However, there are times that I question the motives of people who make an expression of speech and religion because humanity has such a chequered past that it makes wonder what the underlying objective is.
This week, following the extinction rebellion protests in both Brisbane and Melbourne (the latter which saw a lady's legs broken when trampled by a police horse¹), the following banner went up in Blacktown: 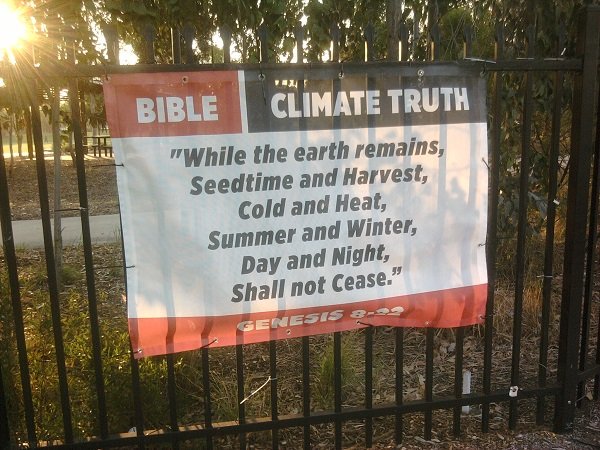 Now although this looks relatively innocuous, the truth is that I find this kind of thing really disturbing.

My problem here is that this is really vague as to what the intent of the banner is. The splash across the top says 'Bible - Climate Truth' which is an appeal to authority however, there is in fact no direction at all, for how the unnamed entity who put this up wants you to interpret it.
If this is put up with the premise that only those people who already know what the intent of this is, then we have a lovely term for that: Dog Whistling.

When placed back into the context of where this fits into the grand story of the book of Genesis, this particular verse makes far more sense. It fits into the broader story of Noah and the ark. Specifically it comes after a passage in which God, who made everything in the beginning and saw that everything was good, puts mankind into his creation and then mankind sets about deliberately disobeying him, then going on to a trail of lying and murder. By the time of Genesis and the beginning of the flood story, the account reads:

The Lord saw how great the wickedness of the human race had become on the earth, and that every inclination of the thoughts of the human heart was only evil all the time.
- Genesis 6:5

I have met some pretty atrocious people. To be fair I probably am a pretty atrocious person in the eyes of others. Nevertheless, I think that it would take an exceedingly atrocious set of circumstances for peoples' wickedness to be so bad that the "thoughts of the human heart was only evil all the time".
In context the words which this banner quotes, comes from a broad picture where mankind goes from being the custodians of what God has made, to being so utterly terrible that God regrets having made people in the first place (6:7).

In the flood account, God finds just one person (Noah) and spares his family. If anything, the broad context is about God's sustaining grace and kindness in the face of human sin.
Immediately before the text of the words of this banner, God says:
Never again will I curse the ground because of humans, even though every inclination of the human heart is evil from childhood. And never again will I destroy all living creatures, as I have done.
- 8:21

It goes on to describe God making a covenant with Noah in which God promises not to destroy humanity and all life:
The waters shall never again become a flood to destroy all flesh.
- 9:15

Everything about this says that the text in question is about God's graciously ruling out the possibility of an utterly destructive Noah-like event that wipes out all life on the earth as we know it.

From a spiritual standpoint, I don't see how this is ruling out the possibility that we humans, through our own sin, selfishness, stupidity, deliberate damage and ignorance, can cause serious damage to our world and its inhabitants. The grand story of the Old Testament in which God chooses the people of Israel, repeatedly has sets of circumstances where they tell God to get stuffed.

Right throughout the Old and New Testaments, the bible is replete with instructions not to act with cruelty or act like a bunch of selfish knaves. If you follow the grand narrative of the Old Testament, not only are people kicked out of Eden, but even after being promised a home land, God's chosen people² are eventually kicked out of that place too, because they also fail and continue to act like a bunch of selfish knaves.

"I brought you into a fertile land to eat its fruit and rich produce. But you came and defiled my land and made my inheritance detestable."
- Jeremiah 2:7

Hear the word of the Lord, you Israelites,
because the Lord has a charge to bring
against you who live in the land:
“There is no faithfulness, no love,
no acknowledgment of God in the land.
There is only cursing, lying and murder,
stealing and adultery;
they break all bounds,
and bloodshed follows bloodshed.
Because of this the land dries up,
and all who live in it waste away;
the beasts of the field, the birds in the sky
and the fish in the sea are swept away.
- Hosea 4:1-3

I simply find it impossible to believe that just because you can quote a passage from the bible, that that somehow excuses you from the consequences of what you have done³. I don't think that any reading of scripture provides an excuse to mankind to abdicate our responsibility to act rightly towards God's good creation.
Furthermore, I think that people who aren't of faith would look at this and think quite rightly that Christians are using their magical sky daddy as an excuse to perpetrate all kinds of evil.

For about four hundred years, we've brand new methods of burning the forests, clearing the land, putting garbage in the waters and poison in the skies. Is whoever put up this banner really trying to tell us that there are no consequences at all for any of this?

What I find doubly galling about this is how this fits into political discourse. I see this as part of a wider weaponisation of Christians for nothing more than political purposes. That particular tactic worked so very well in the United States because of some very strong mythologising which has taken place over the past forty years. It takes a special kind of knavery to make people actively not care about the most vulnerable of society and also to actively not care about the environment which sustains you.

"The earth dries up and withers, the world languishes and withers, the exalted of the earth languish. The earth is defiled by its people; they have disobeyed the laws, violated the statutes and broken the everlasting covenant. Therefore a curse consumes the earth; its people must bear their guilt. Therefore earth's inhabitants are burned up, and very few are left."
- Isaiah 24:4-6

Scientists and engineers are pretty cluey people. The same people who sent rockets into space to discover what other planets were like, also ended up discovering the earth. It's only been for the last 50 years or so that we've been able to measure what is going on.
If you had 97% of economists and insurance brokers warning of a contingent risk, you would seriously consider doing something about it. I do not understand why people who claim to be Christian would want to manipulate people into doing nothing about that contingent risk. That seems pretty knavish to me.

³The devil can cite Scripture for his purpose.
An evil soul producing holy witness
Is like a villain with a smiling cheek,
A goodly apple rotten at the heart.

O, what a goodly outside falsehood hath!
- Shylock, The Merchant Of Venice, Act 1, Scene 3