When I was on my way home on Thursday, I came across the following: 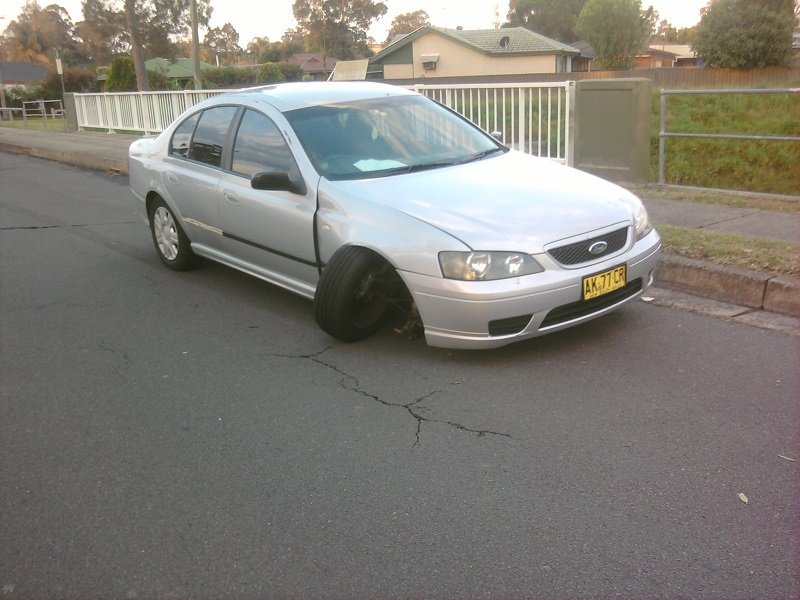 This is a silver Ford Falcon BA that is in a pretty sorry state.

Naturally being a good citizen and recognising the very obvious traffic hazard, I phoned the police on 131444 (only use 000 for emergencies) and gave them as many details as I could which included make, model, number plate, location, and description of the accident.

The reason why I thought about doing that apart from the fact that there is a traffic island further up the street and this car's presence creates a contingent possibility of a further accident, is that the circumstances of this are really really weird.

If you look at the angle of the front right wheel, it is readily apparent that it should not be facing at right angles relative to the direction of travel. That can only have happened if it has broken a tie rod or the end, or broken the connection between the wheel and the tie rod. That is not normal.
It is so unbelievably not normal that the only explanation is that something not normal has happened. When you have something not normal, then that demands further investigation. 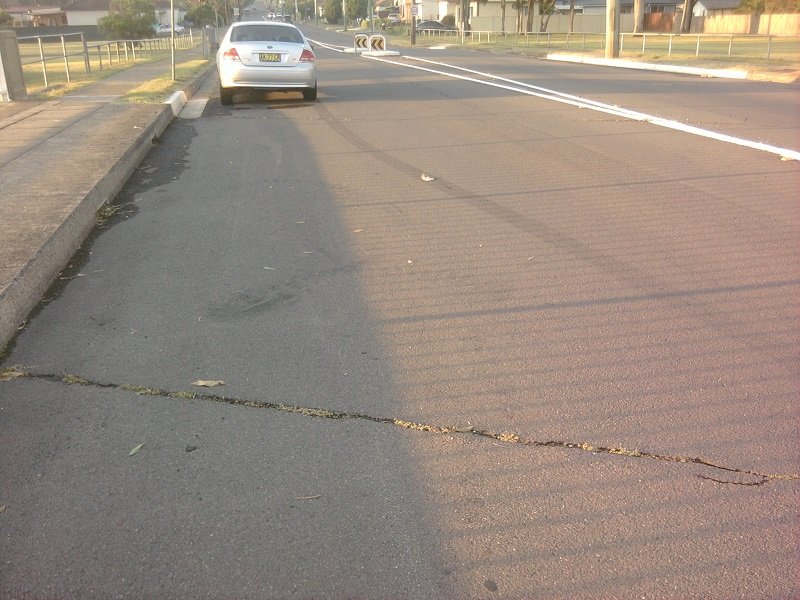 Behind the vehicle is a skid mark which indicates that it came to an abnormal stop. I know roughly what the distance of the skid is, and the weight of the vehicle. From here using basic high school physics equations at bare minimum the car must have been travelling at 18m/s or 65km/h; which is already above the posted speed limit of 60km/h. I would estimate that a bunch of kinetic energy has been dissipated by both the brakes and the friction of the sideways tyre over the road. I would suggest that the vehicle was moving at least 70km/h.
This would at least explain why the vehicle has been simply abandoned. It is also here where I confess that I tampered with the crime scene (making sure that I didn't leave any fingerprints), by opening the rear left hand side passenger door.

What I find particularly telling is a complete lack of broken pieces of car at the scene. This indicates to me that this happened in isolation and that no other cars were involved in the accident.
Knowing this to be true, then I can begin to posit a theory to fit the facts but can not know for certain if I am even close to making a decent guess.

On 24th of October 2019, person or persons unknown were travelling in a southbound direction on Davis Rd Marayong, travelling at at least 70km/h when they struck the kerb on the other side of the road (which would explain why the tyre has broken free of the tie rod and why there is deformation of the front right quarter panel), when the car came skidding back across the road to a stop.

Whatever the outcome is, I feel sorry for the Falcon. I am prepared to forget the red/blue Holden/Ford argument and accept all Commodores and Falcons as special and part of the cultural fabric of this country. Whoever was driving this vehicle was an idiot. Notwithstanding that they may have endangered other people's life and limb but they have hurt this Falcon.
I imagine that nobody in the vehicle was hurt and due to the nature of the complete lack of detritus left behind, I imagine that nobody else was hurt but I can not help but feel sorry for this Falcon that has had to endure idiots. I am worried that it might not be considered valuable enough to be repaired
(and I secretly want it).
Posted by Rollo at 07:11