http://www.smh.com.au/comment/column-8/column-8-20140714-zt6w5.html
From our ‘‘Arrggh, In MY Day...’’ Desk (shop assistants who can’t do even the simplest maths in their heads, Column 8, last week). Gerry Brooks, of Haberfield, tells us that ‘‘my mother was a junior shop assistant in the early 1900s in England. She worked at Mrs  Frobisher’s Haberdashery and was expected to sell one and three quarter yards of dress material at a penny farthing per yard, a farthing being a quarter of a penny. She had to do this in her head, any rounding had to be in favour of the shop, and she had to give the correct change out of sixpence!’’
- Column 8, The Sydney Morning Herald, 15th Jul 2014

Apart from the fact that I doubt whether or not Mrs  Frobisher’s Haberdashery actually ever existed (because Marjory Frobisher was Audrey fforbes-Hamilton's best friend in BBC1's comedy series "To the Manor Born"), I also think that this particular mither stems from a fear of the unknown.

To the problem at hand:
Sell one and three quarter yards of dress material at a penny farthing per yard, and give correct change out of sixpence, in favour of the shop.

I did this in my head, from the distance it takes to walk from the newsagent to the office.

However, when I got up to the office, I thought about how difficult that this particular problem is, if you have to deal with this in decimal.

Suddenly it becomes 1.75 and 1.25 and as soon as that happens, it might run out to four decimal places. If anything, the lament that "shop assistants who can’t do even the simplest maths in their heads" becomes somewhat cruel, seeing as I work an in accountant's office and I regularly engage in recreational maths. I can't do this problem in my head in decimal... but I can in £sd.

This is the thing about imperial units. People lament now that they seem confusing but the point remains that they were all incredibly useful. A pound of 16 ounces can be cut into halves and in halves again and in halves again. There are 8 pints in a gallon and 20 fluid ounces in a pint. This is all simple simple maths.
Metric does have division by ten but I ask you, 1.75m by $1.25/m? That becomes $2.1875 which I suppose is more efficient, but anyone with a calculator or more importantly a cash register with even a simple computer in it, would be able to do this.

Also, I'm pretty sure that in early 1900s England, there would have been a question of basic literacy before we even ask questions of numeracy. It wasn't until The Education Act of 1918, that the school leaving age was raised to 14 and I wonder if a junior shop assistant who left school at 12 would have even been equipped to do this in her head.
Given that Gerry Brooks, of Haberfield, says that his mother was one in the early 1900s, then how old must he be? Fiddling with ages to be the most generous, Mother Brooks must have been born in about 1895 at the latest (assuming she'd have been 14 in 1909). Was he born in the Depression?... too many questions here.

I think that this complaint then, is not one of how difficult the mental gymnastics are but rather on the quality of junior shop assistants. That sort of thing really does belong on the our ‘‘Arrggh, In MY Day...’’ Desk, for which Column 8 has been a supporter of since 1947.
Granny would be proud. 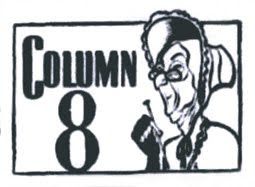 Pennys begin with a p. is this a typo?

Turns out that d was used as the abbreviation for the pre-decimal penny.

yes i true this penny joss