Preface:
I find it extraordinary that as an Australian citizen, I can recite clauses from the US Constitution, name more than 30 US Presidents, name every British Prime Minister going back to Lord Melbourne and even cite key pieces of legislation that make up Britain's unwritten constitution. I can not however, name Australia's Prime Ministers with any reliability beyond Menzies' first term in office and only really a few paltry highlights before then.
I think that as a nation, we tend to look outwards to such a degree that we forget to review our own history. I see the value in remembering our own history because maybe, from looking at where we came from, we can see the seeds of where we are going. Even though I am not a republican, I think that we undervalue our own history in favour of that of the British Commonwealth; that I see as a little bit silly.
It is easy to define a nation by what it is not but when you don't even know your own history with any reliability, how are you suppose to define the nation by what you do know?

No doubt there are better and more scholarly references; written by proper political historians but the purpose of these 30 posts, isn't necessarily to provide a new history text; instead it is to correct my hideous failure to learn abotu the history of the country in which I live. 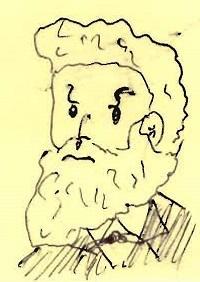 I deliberately start with Part 0 because the story of how Australian came to be is as important as any of the Prime Ministers themselves. The book of Genesis starts with the words "In the Beginning" but Australia started with a tumultuous story before it even had its own "in the beginning".

Parkes was vocal in his view that New South Wales should have self-governance and set up the Empire newspaper in the 1840s and was also a strong advocate for universal sufferage. Unfortunately Parkes was also a terrible businessmen and by the time that New South Wales acheived self-governance, he'd racked up debts of £48,000 and declared bankruptcy.
Nevertheless, as a skilled orator, he frequently both resigned as local member for parliament of East Sydney and was re-elected as the local member and being the days before political parties had established themselves, he became Premier of  New South Wales five times.

Australia was and in many respects was six colonies, all of which had their own parliaments and their own established internal constitutions. They all had inherited a bicameral parliamentary structure and in operation they were more or less mechanically alike.
Arguably (pun intended) they had also inherited the also inherited very British art of arguing at great length and intensely on the floors of the chamber; naturally this was always going to spill out when they came to dealing with each other. The six states found many founts to argue from, including customs and excise, the movement of goods and people and even issues such at the telegraph and the railways. An apocryphal plaque at Albury railway Station exemplified this with the statement:
“Look on with disdain, oh people of Victoria, for you shall pass no further.”

How then and under what circumstances would anyone bring six unfriendly powers together in Federation. Moreover, why?
The idea was first floated in the 1870s and various conferences were held during the 1880s and 90s but I suspect the thing that really brought the six states together, was firstly the Boer War in which Australians and New Zelanders fought and the Boxer Rebellion, which was spun in the propaganda of they day to imply that Australia would be invaded by the Chinese. Nothing binds together a group of people than the threat of a common enemy, be it real or imagined I suppose.

It was during the conferences and eventual Constitution Conventions that the states kind of nutted together what form the Australian Parliament would take. Along with the Victorian Premier George Turner, who would eventually become the first Federal Treasurer, Parkes became more vocal in issues to do with tariffs that existed between the states. In Parkes' Tenterfield Oration of 1889, he openly called for the states to be Federated to form a new Commonwealth.
Parkes would be instrumental in the formation of the new Free Trade Party which called for the abolition of all tariffs and whilst Turner would join his compatriot Edmund Barton in his Protectionist Party, which called for the imposition of tariffs to protect Australian industry, the idea that the states should be federated remained.

During the Constitution Convention of 1891, delegates from New Zealand also attended but by the convention of 1898, New Zealand had lost interest; though the door was left open for them to join the commonwealth it they still so desired. Parkes died in 1896 at the age of 80 and so didn't live to see the 1898 convention nor the final constitution that it would eventually draft.
The Constitution Convention of 1898 is where the ideas that the Senate should have an equal representation from the states was hit upon, as a measure to stop the bigger states from bullying the smaller ones and although by that time, Parkes had died, he had already left a very long lasting impression on the formation of the nation.

Henry Parkes was married twice and had 17 children. Continuing his bad form in business, he also died penniless; though he must have been able to see the characteristics of a good treasurer in other people, as the treasury under his administration remained healthy and viable despite the recessions in the world of the 1890s.

Given that neither the role of Prime Minster was defined in the Constitution (and only really assumed to exist through tradition) and that the party political system which would eventually come to settle had not yet appeared, I don't think it unreasonable to assume that had Parkes lived to see Federation, then he probably would have been made Prime Minister of a rag-tag assortment of parties. It might not have been a unity or national government or even a coalition as we now understand those terms, but perhaps something akin to the British Prime Ministers up until about the 1870s; that is, one over a very broad range of interests.
I also think that given the very quick way in which parties solidified even in that first term of parliament, that not even Parkes with his broad vision for Federation which took more than 30 years to see fruition, would have been able to hold together so many disparate groups which were forming; including the nascent Labour Party and the seeds of the Commonwealth Liberal Party (which is a little bit different to the current Liberal Party).
Henry Parkes never got to be the 1st Prime Minister but I think that he deserves to be called the 0th.
Posted by Rollo at 13:30