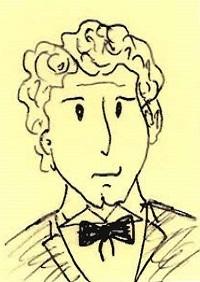 Edmund Barton was Australia's First Prime Minister. He almost was not; twice.

Barton became a member of parliament for the Electoral district of University of Sydney; this was before many people even had the right to vote. Barton was nominally a member of the faction in state parliament who supported Free Trade, though was appointed Attorney-General of New South Wales under Premier George Dibbs's Protectionist government (who supported the imposition of tariffs). Yet Barton doesn't even get his first mention in the history books for being Attorney-General.

On 7th Feb 1879, an England cricket tour led by England's second ever captain, George Harris, was playing against a New South Wales side at what is now the Sydney Cricket Ground. Edmund Barton was one of the umpires at that match.
The other umpire, whom it was suspected of being employed by the English in a match-fixing scandal, gave Australian batsman Billy Murdoch "run out" and a riot broke out.  which Barton helped to diffuse. The publicity as a result of that, probably helped him get elected in the first place.

As a result of being Attorney-General of NSW, Barton was a member of a delegation sent to London to help persuade the British House of Commons to pass the bills which would create the new Commonwealth of Australia. In that delegation was also Alfred Deakin and the main author of the constitution, Samuel Griffith who was the Premier of Queensland.

Barton though almost missed out on being the first Prime Minister of the new commonwealth because the Governor-General John Hope, the 7th Earl of Hopetoun (Lord Hopetoun), had thought it logical that the Premier of New South Wales Sir William Lyne, should be the Prime Minister on the grounds of seniority until a proper nationwide election was held.
Lyne though was a strong Protectionist and an anti-federalist; and many potential ministers such as Deakin, simply refused to serve in any cabinet that he might lead. Lyne in time turned down the position and Lord Hopetoun instead appointed Barton as the caretaker Prime Minister until an election was held. This in time would become known as the "Hopetoun Blunder".

When the 1901 election finally came around, Barton's Protectionist Party won 31 seats to George Reid's Free Trade Party who claimed 28; both were short of the 38 out of 75 seats required to form government in their own right.
Seeing as both the Protectionists and the Free Traders were both centre-right parties and wouldn't negotiate with each other, Barton had to secure supply on the floor of the house by forming a sort of coalition with the members from the state Labor Parties who still hadn't formally established a national administration (actually, only the Free Trade Party was the only properly national party).
In just over two years, the parliament under Edmund Barton would go from a relatively unordered group of members from six states to something that looked a bit more like the current two-party system. Essentially the parliament the parliament was made up of what would become two factions of the Liberal Party and the Labor Party as a third and minor party but as kingmaker.

Barton's Protectionist government lived up to its name and within the year it had introduced with amounted to the White Australia policy and enacted testing of immigrants to keep potential migrants from Asia and the Pacific out. Immigration tests could be done in various European languages, which since Asian migrants couldn't very well pass at the time, would not be accepted as migrants. This might sound all a bit strange to a modern set of sensibilities (on the basis of racism and common decency), considering that to pass the legislation the centre-right Protectionist party needed help from a centre-left Labor Party but it's worth remembering that in 1901, society was quite different and the Labor Party particularly in Queensland, thought that Pacific Islanders would undercut white people in terms of wages prices and thus take their jobs.
Barton's government did pass legislation to extend the franchise to women in 1902; so I suppose that in that respect they appear relatively progressive.

In addition to removing the formal customs duties between the states, the Barton Government moved on matters such as imposing tariffs on foreign goods and establishing the armed forces.

Barton's government faced a crisis when his Minister for Trade and Customs, Charles Kingston, found it increasingly difficult to negotiate legislation which would impose very high tariffs to protect fledging Australian manufacturing industries and so resigned in July 1902. This brought into question Barton's ability to lead the party and the stress probably got to him, as he collapsed in his offices in parliament. Due to declining health, Barton resigned his position as Prime Minister in September of 1903 and was succeeded by Alfred Deakin who largely left the cabinet unchanged. Barton would later go on to as Chief Justice of the High Court of Australia.

I think that what Edmund Barton teaches us is that politics is a difficult game. He was a reasonable man and that is evidenced by the fact that he was selected to be the care taker Prime Minister before the first election. The problem is that reasonableness is sometimes not enough. The parliament sometimes has the nickname of the "bear pit" because unwary people can get metaphorically mauled in there; Barton was one of those.
Posted by Rollo at 17:18