October in Australia is increasingly marked in the shops with orange and black; in preparation for Halloween. The thing is though that Halloween in Sydney happens in late Spring. That means that it happens after Eastern Daylight Savings Time has been in force for almost a month. That also means that the supposed to be spooky time of Halloween, where kiddies walk around to get 'candy' from other people's houses, happens in broad daylight; where sunset is at 07:22pm and astronomical twilight happens at 09:02pm. It is all very silly.
The really weird thing about November is that by the time it arrives, it is really only then, after the footy finals and Bathurst and the arrival of the A-League and cricket, is that I am only really properly conscious that spring has arrived.
At the other end of the day, that is the beginning, sunrise is already sufficiently early enough to wake up the cats before me, and it means that by the time I leave the house to go to work, the sun has come up a fair amount.
It is gorgeous. 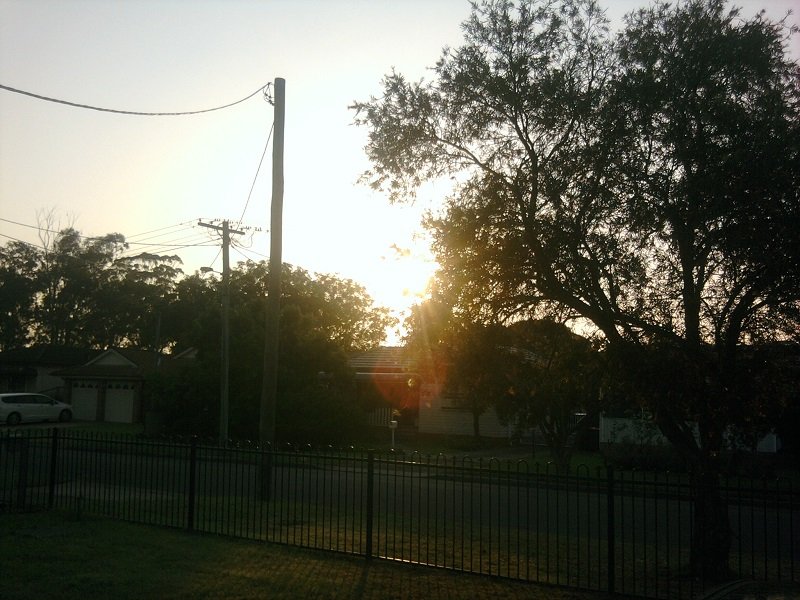 While it is true that I like those evenings where the sun sets into pinks and reds, the heat of the day is usually still hanging around. In the morning though, the sun has not yet had time to make everything hot; so by the time I made it to the railway station this morning, it was only 18°C (65°F) and really pleasant.
You can walk around in the stillness of the morning, before the world has woken up, in light which is made of more yellows and golds.

In the middle of winter when there is nobody around and it is so cold that all of my fingers and toes are screaming at me, my prime objective is to get on a train to escape the environment. On a day like today where that is not the case, when it is so late in the year that the magpies have stopped swooping, and where galahs, ravens, kookaburras, sparrows, wagtails, and even the mynahs, are all out doing their bird thing, it is a disappointment to have to leave.

The people that are around in the morning are there not out of obligation but because they choose to be. As such, people are generally friendlier than they are earlier in the year. There are more people who are out walking their dogs or perhaps getting in a spot of morning exercise and unlike I the dead of winter when people almost magically appear out of the fog, in the golden morning light of spring, they wave at you.
By the end of November though, those people will generally be gone. When the summer arrives in December, the temperature has already risen to unpleasantness by the time I leave for work, and the friendly people who are jogging or walking their dogs, have already been and done that.

November then is this almost liminal time of year where for two fortnights, the weather is just so and yet, I get to come home in the light. While that's nice, it still isn't that same level of perfection which only really exists on a November morning.
Posted by Rollo at 07:17