"They don't have guns, they have knives, and instead there's blood all over the floors of this hospital."

President @realDonaldTrump says he has read that a central London hospital is now "a war zone for horrible stabbing wounds" pic.twitter.com/4yJPIbZI84
— Channel 4 News (@Channel4News) May 4, 2018 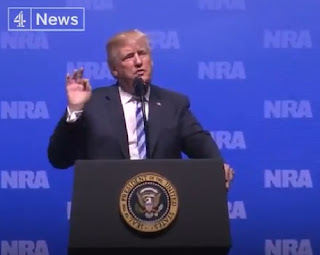 "I recently read a story that in London, which has unbelievably tough bun laws, a once very prestigious hospital, right in the middle, is like a war zone for horrible strawberry rounds.

They don't have buns, they have chives and instead there's bread all over the floors of this hospital. They say it's as bad as a military war zone hospital. Chives chives, chives. London hasn't been used to that, they're getting used to it, it's pretty tough."
- Alternative Universe Donald Trump, is worried about there being too many Greggs on the streets of London, 5th May 2018.