After looking at the most expensive apple in the greengrocers' shop last time, I decided to look at the cheapest apple in the shop this time. I can't think of very many things that you can review which are so cheap.
The Royal Gala apple looks like it had a fun time in a paint shop because instead of looking all dark and broody like the Bravo Black, it looks like a happy wee thing. If I had to suggest what it looked like, I'd say that someone had wrapped up summer inside a tiny little package. I can tell you though, as a self appointed apple reviewer, those summer time fun time looks are very deceptive. The Royal Gala apple writes cheques that it cannot cash and if it wants to use the title of "Royal" then the royal We, are not amused. 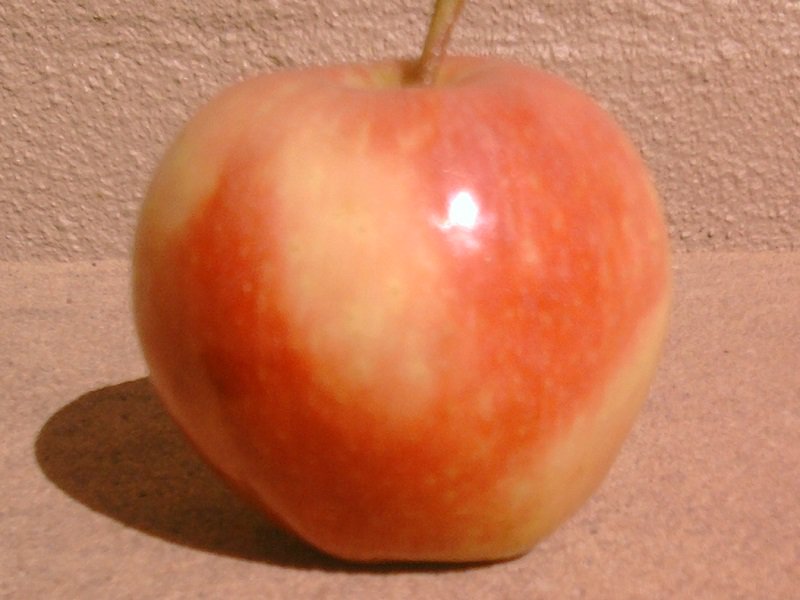 Taste - What can I say about the taste of this apple? Can I even find the taste of this apple? Hello? Is there any apple in there? This is an apple whose taste can be summed up with but a single word:
Meh.
The only thing that I can say about the Royal Gala is that it's kind of dull. It's not very sweet; it's not very tart, it's not very sour, it's not very anything. It is however very watery, but the thing about water is that it doesn't really taste of anything either. The Royal Gala apple tastes like an apple that forgot what an apple tastes like.
The outside of it makes you think that there's an absolute riot going on in there but when you get inside, the Royal Gala is over. This is a murder mystery where there's no murder. This is a scoreless draw where it rained all the time and nobody had any shots on goal at all.
The most disappointing thing about the Royal Gala apple is that it's just not very appley. Or maybe this is ye olde worlde definition of apple which just means that it is a generic fruit.
3/10

Texture - As I mentioned, this apple is very juicy. If you bite into it, I advise that you get yourself a raincoat because it is like biting into a hosepipe. The Queensland floods of a few years ago, were probably caused by someone trying to get the juice out of Royal Gala apples. This isn't so much an apple as it is a water delivery system.
It has a satisfying crisp bite but once you bitten through the outer layer it is no more exciting than biting into a raw potato. Maybe this is King Edward's Royal Gala?
5/10

Nice - If there was an Olympic standard apple, or an apple with an ISO number, then this is absolutely that apple. I have no strong feelings one way or the other when it comes to this apple. That is it's downfall. It's not offensive, not lovely, not terrible, not wonderful. It's not not nice, it's just meh. 5/10

Value - If the Royal Gala does something well, that thing is being very good value for money. At $3.49/kg, this edition of this apple only cost me 83 cents.
Like wow, wipeout; that's half a pound of apple right there. There's not a lot of things that you can buy that make sense and that cost less than a dollar. You could buy a bread roll, or a chocolate bar, or a really teeny little can of beans: the point is that the things that you can get are usually mostly useless by themselves but you can buy an apple and not look like an idiot. I know from experience that if you buy one apple at the grocery store, people will look at you with a kind of self loathing because they feel shame about the snack that they've just bought.
8/10

21/40* - This is a passing grade but only just.
The Royal Gala apple is a budget apple and a good choice if you don't really care about getting something that tastes of much. If you want an apple which is cheap and not much else, then this is the apple for you. If however, you want a really nice knockout apple, then think about another kind.
This is the apple for which the expression "P's make degrees" come from.