There are many magazines in the newsagent which compare a myriad of things; from motor cars, to beauty products, financial services, music and a host of other things as well as the perennial "Choice" magazine which I suppose compares... everything?
I am a chap who would like to compare many motor cars and be paid to write about them for one of those magazines but I highly doubt that that's likely.
If you would like to throw many thousands of dollarpounds in my direction for writing inane drivel, then please contact me. I've read the work of newspaper columnists for years and if anything, I'm overqualified.

Regular readers of this blog will recall that I have a fascination with the mundane and minor things of the world. In fact only this morning when I was madly hammering numbers into MYOB, my brain was still pondering on the subject of the topology of humans. I think that we're either genus 5 or 6 but I'm not entirely sure but by the same token, I don't want to think particularly hard about taking slices through a human to find out.
At lunch time, I was wandering around the greengrocers' shop and it struck me that just in this one shop, there were seven different varieties of apple. I wasn't about to have some kind of existential crisis and I was never going to freak out over how many choices that I have, but the thought struck me that I both quantitatively and qualitatively know diddly squat about apples. Why have I never put them head to head against each other in some kind of Apple Champions League to determine which is the best apple?
So there and then, I have made the decision, since I buy them anyway, to rate apples against each other to find out which one is best.

Let's venture out on this journey of Malus adventure by starting with an apple that I'm sure I've never heard of and am unlikely to find in an average supermarket or greengrocer but I might find in an upmarket bodega, apotheke or fancy-pants providore. 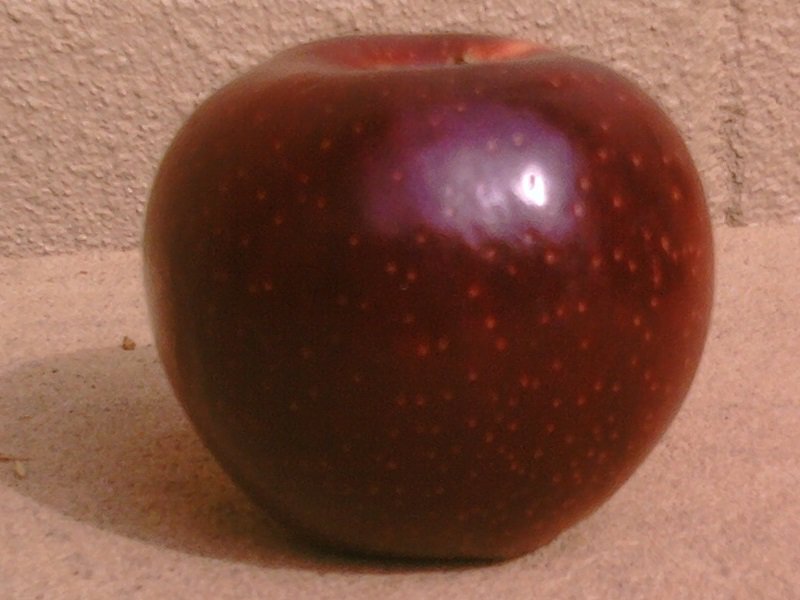 As the name Bravo Black suggests, this is a very dark coloured apple. In my mind already, this is the kind of apple that the witch in Snow White and the Seven Dwarves used because it looks shiny and delicious but kind of a little bit evil. This is about as close to a goth apple as I have ever seen.

Taste - like an apple. It's not overly sweet and it's not overly acidic or sour. I'm also finding that the further I go along, the bits which kind of brown a little, aren't offensive either. This apple reminds me of the apples that overhung a fence on my way to primary school but unlike those where they were so acidic that it was like you had bitten into a AA battery, this has enough sweetness to balance that out. I've eaten enough apples in my life to know that this is pretty close to what a stereotypical apple taste is. I can't say anything particularly brilliant or bad about this in any direction - it just is.
Since my cooking skills are pathetic and I view cooking mostly as either a functional pursuit or a science for hungry people where you follow directions, I can not tell you if this would make a good cooking, stewing or cider apple.
7/10

Texture - This is a very crisp apple. Every bite comes with the traditional apple crunch noise. Every bite is an effort as you rip into the juicy flesh of the fruit. The bites also come away in distinct fractures which themselves yield their juice without leaving a floury pulp. I can imagine that if you were seven years old and losing a tooth, then this apple would not be advisable for you to eat because it is quite hard and does not yield easily.
9/10

Nice - I think that this is a good middle of the road apple. It doesn't try to be weird, there aren't any champagne overtones, nor is it an acquired taste. This is just an apple which if you ate it without any idea of the variety, you would just think of as being an apple.
7/10

Value - at $9.99kg I think that this is possibly the most expensive apple that I've ever seen in my life. However, what you get for that price is a very nice apple. I don't really want to sound all pompous here but I'm not sure if it really deserves its Rolls Royce pricetag. I will admit that I did buy it in Mosman which was probably a mistake but even so, I don't think that it is necessarily bad value for money, it's just not great either.
5/10

The Bravo Black is a nice but expensive apple. It is let down by the price but intrinsically there's nothing wrong with it at all. This is a solid pass for an apple and I think was a good starting point. I would recommend that you buy a Bravo Black but only if you aren't bothered by the price. I should also say that this particular apple by itself cost $2.10; which gives you an idea that it is a big apple. This was one of the smallest of its cohort on display. Most apples of this variety I expect will cost you more.

28/40 - This is a passing grade for this apple. As the only one I've reviewed thus far, it is by default at the top of the class.