I don't generally write very much about the politics of the 45th President of the United States because quite frankly it would be like peeing into an ocean of pee, whilst on board the HMS Whizz-Whizz. The orange haired loon who currently occupies Studio 1A at 1600 Pennsylvania Avenue¹ has all the competency of a bull with broadswords gaffer taped as extensions to its horns, that has just been put in charge of security of porcelain miniatures at the Royal Doulton factory outlet. I think that he's comprehensively proven that all of his political ambitions extended as far as November 8th 2016, and that he had no plans beyond that date and still hasn't developed any.

In his ongoing campaign to improve international relations by single handedly being the least capable world leader (say what you like about Vladimir Putin, Kim Jong Un, or Bashar al-Assad, they've at least shown that they are capable of running their administrations for their own purposes, however mad, bad or sad those purposes are), Donald J Trump has visited leaders of ill intent, insulted America's neighbours and allies, yelled at North Korea to the point where talks have been held between the two Koreas in the fears that he might show up at some point in the future, and in an act with about as much tact as poking a sleeping bear with the end of a baseball bat that happens to be on fire, ordered that the American Embassy in Israel be moved to Jerusalem.

Anyone who has been alive since 1922 should know that relations between the various people groups of the Middle East are best described as sensitive and delicate. It should have been learned by now, that the lessons of colonialism which drew lines over everything was mostly a bad idea and in the case of the Middle East, the only thing keeping the region from devolving into perpetual conflict with increasingly more powerful weaponry, was the Ottoman Empire sitting over the top. The idea of repatriating Jewish people to the Middle East was always going to be and continues to be fraught with danger; there's never really going to be a one state solution or a two state solution to be honest.
Nevertheless, Donald J Trump took the executive decision to throw aside history, common sense, logic, tact, safety and sanity, by moving the American Embassy from Tel Aviv to Jerusalem, and let's just say that an insensible decision has already had insensible consequences. 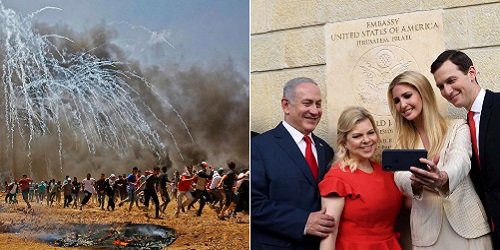 While Israeli officials were celebrating the opening of the brand US Embassy, with Jared Kushner and Ivanka Trump in attendance along with other minders from the Trump administration, probably within earshot and less than 70km away, Israeli troops were murdering Palestinian protesters in Gaza; all while American and Israely government officials were having a collective praise party for their devotion to peace.
Meanwhile, more than 2700 people have been injured at least 60 people killed by the Israeli military which has said that it had fired live rounds "selectively" in line with so-called "standard" procedures.
Meanwhile while all this was going on, North Korea has suspended talks with South Korea and will more than likely cancel the summit in Singapore with Donald Trump next month, after joint US-South Korean air combat drills with F-117 stealth fighters and B-52 bombers were carried out in an operation which has been called "Max Thunder²".

If my Twitter and Facebook feeds are anything to go by, Christians in America appear to support Israel to the hilt because they see it necessary for America to be part of the fulfillment of end-times prophecy. The logic is that if you "bless Israel" then you get back blessings in some kind of God-is-a-vending-machine arrangement. I don't understand this.
The theology here is terrible. The modern secular state of Israel is a very different beast to the ancient state. The only thing I can think of is that blessing Israel in the abstract is like moving pieces around a chessboard; instead of moving artillery pieces around the countryside and blowing up actual real living people with flesh, blood, families, and lives. I don't see the connection here with a love for people; especially when you see antisemitism and anti-Islamic sentiments bordering on hate speech from the same side.

The only question I can ask at this point is "What the hell is going on here?" I would choose a four letter expletive but none of them are adequate at expressing my incredulousness at the situation.
Don't apologise for Mr Trump or his administration. This is the third worst Presidency behind that of Warren G. Harding who had multiple corruption scandals and an affair with one of his mistresses which resulted in a child, and that of James Buchanan whose failure to deal with secession actually broke the Union in half and sent the country into civil war.
I think that the world will breathe a collective sigh of relief when Trump leaves the Oval Office. It might take a while to clean out the stink of his administration, or complete lack thereof, though.

¹I think that Mr Trump sees the Presidency as a continuation of his reality TV career.
²How did nobody see this coming? https://edition.cnn.com/2018/05/11/opinions/us-embassy-move-jerusalem-shapiro-opinion-intl/index.html
³I have not made the name Max Thunder up. I am not 9 years old. I suspect that many peopel ate the Pentagon have that mental age though. http://www.bbc.com/news/av/world-asia-39656840/us-and-south-korea-carry-out-max-thunder-military-drill