Since undertaking my role as self appointed apple reviewer I have only visited one particular greengrocers'shop. i figure that by visiting the produce section of a normal supermarket, I should be able to find a less exotic apple and get more in touch with the people. An apple for the masses in an ordinary run of the mill supermarket is a democratic apple, right?
I went to one of the big chain supermarkets and found the pile which was the biggest. The thing that I found really worrisome was that they have apples in plastic packets of half a dozen and in a world where plastic is already getting into the oceans and killing whales more than a thousand miles off the coast, this is utterly ludicrous to me. I don't care about spots on my apples, leave me the birds and bees, please? Anyway, the biggest pile of loose apples was a pile of Pink Lady apples. I thought, that that's the one for me. 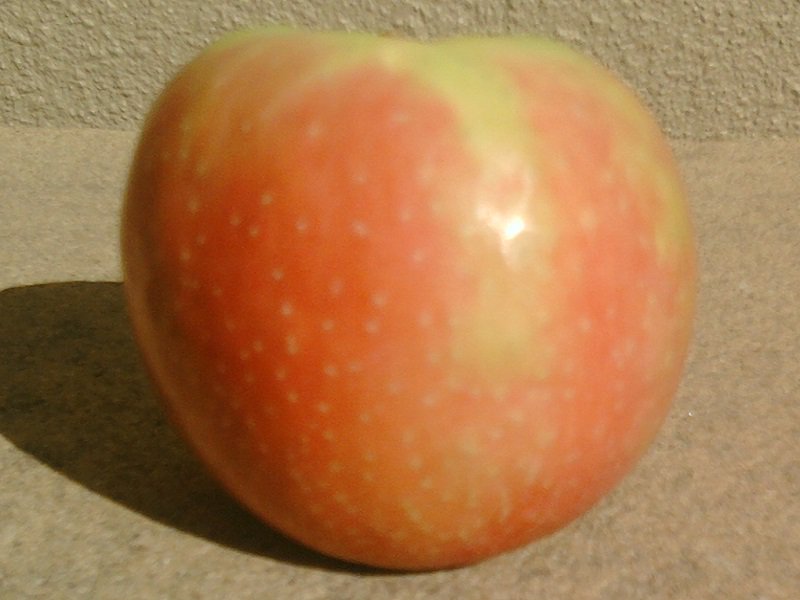 Thanks to the film "Grease" I can't get the thought out of my head that a Pink Lady apple is one that hangs around in the car park in apple high school and wants to get a ride with the apples wearing black (Bravo Black - see Horse 2407). As found out, this might not be that far away from the truth, as the Pink Lady isn't all that she appears to be.

Texture - The Pink Lady will not yield easily to your attempts to rip it to pieces. Biting into a Pink Lady is like biting into a raw potato and although every chew is an effort, it is worth it. Admittedly once you start chewing it, it is quite a bit nicer than what you first think but that first bite into it is a doozy.
Of course the Pink Lady is hard. She has a reputation to maintain. She will not yield easily and nor will she be crushed. Although she wants to appear to be cool, she is no pushover.
7/10

Nice -  I can not find any fault with the Pink Lady other than it is a little bit too hard. Niceness is one of those fleeting qualities that might be dependent on how you feel at the time but even if it is, the Pink Lady is still a nice apple. If you were offered many choices of apple, then this would be a good one because you would be assured that it would be nice.
This is despite not having an overly obvious taste. It tastes like apples. An apple that tastes like it is supposed to is inherently a good thing because you know what to expect. Sometimes a thing is nice because it just is and does what it's supposed to.
9/10

Value - I can only assume that the Pink Lady is in season or that lots of growers grow them because at $2.19/kg, this is a very good apple for the price. This little example cost me just 45 cents. As far as value for money goes, that's excellent and if this does end up being the cheapest, I'm going to award it the full ten points in the future.
If you are on a budget and want apples to eat as is, without any preparation, then these are a good choice. You can get more than 2 kilos of Pink Lady apples for a fiver and that just seems astonishing to me.
9*/10 - Subject to change.

The Pink Lady is a nice apple if a little bit hard. I would absolutely recommend buying this variety if you want a snack. I am not a gastronomic expert but just the physical science of the thing tells me that this would not be a good apple to put into a pie because the chunks would remain hard.