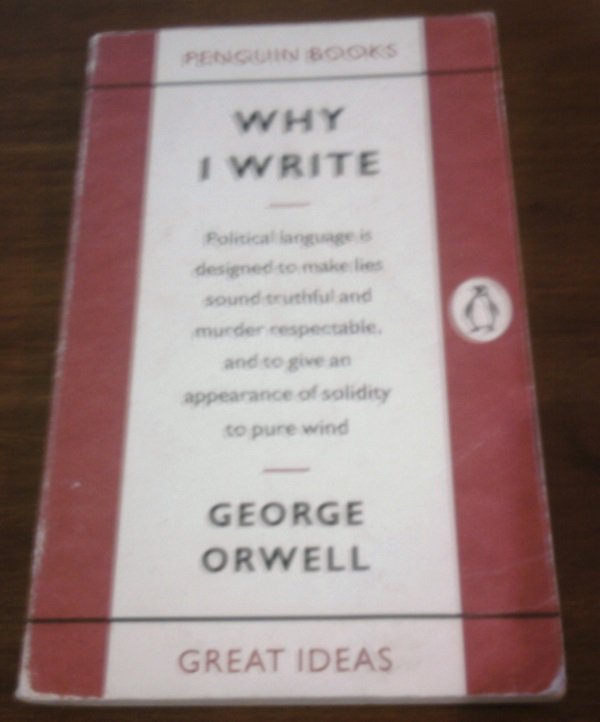 There is something of a literary joke that nobody has actually read 1984 by George Orwell. This even found its way onto an episode of QI, where the klaxons came out for someone who answered that they had read it. I have read it and I think that it is doubleplusaverage.
There is something to be said about the pieces of popular culture that come into a mind during the years of adolescence, as they seem to make more of a lasting impact on an individual. My first encounter with 1984 happened in Year 10 when in English class, we were reading a novel which I had an almost visceral reaction to; so I looked at the reading list from the Department Of Education and found that the English Department's storeroom had a full 130 whole grade set of copies and so I asked if I could borrow one. That year, I ended up answering the final exam questions in the School Certificate as the only student in our grade who had read this book. As a 16 year old, I had read quite a few dystopian novels; so this was well within my wheelhouse.
Over the course of the following summer, I ended up reading Animal Farm, The Road To Wigan Pier, and Keep The Aspidistra Flying and although they're all fine, none of them made as much impact on my brain as Orwell's essays.

During the 1990s, Australia at both Federal and State level was busily actively tearing down and destroying all of the public institutions that were profitable, so that they could be sold off and privatised. We now live in the legacy of twenty years of almost criminal activity from governments and the terrible thing is that those institutions will never be put back into public hands.
It was in that economic climate that I read a lot of Orwell's essays and while books like 1984 and Animal Farm deal with the oppressive effects of totalitarianism (because he was looking out from the sceptered isle at both Fascism and Soviet Communism), I was looking at the other end of the welfare state and seeing a different set of people claiming the spoils of governance, except this time they were unelected.
Orwell had lived through the era of late imperialism with people like Colonel Blimp, then seen authoritarian answers arise to solve the problems of a continent in disarray. Hitler, Mussolini and Stalin were the embodiment of those answers but by the time I was becoming politically aware, Germany had reunified, the Iron Curtain had been drawn back, Gorbachev, Glasnost and Perestroika had been and gone, and Boris Yeltsin was busily drinking himself to death, along with the remnants of the old regime. Once the Iron Curtain had been drawn back, the ghosts of Hitler, Mussolini and Stalin were beginning to be chased away with a little bit of illumination.

People who have read Animal Farm and 1984 might have had the impression that Orwell hated the state. This is probably in ignorance though, as Orwell himself was an employee of the state broadcaster, the BBC. The thing that you take away from his essays like The Lion And The Unicorn, A Hanging, Why I Write and whatnot, is that Orwell was in fact a socialist. I think that the basic question which is driving Orwell in many of his essays, is if it is possible to spend millions of pounds on blowing people up, destroying people's houses, and killing civilians who would have otherwise preferred to go about with their daily lives in noble mundanity, then why wouldn't it be possible to win the peace after the war by spending millions of pounds collectively improving people's lives?
The central questions of economics are: What to produce? How much to produce? How to produce? For whom do you produce? Who decides what to produce and for whom? Why are we producing? Orwell doesn't answer any of these questions but he is concerned about the people with power who get to decide these things and make policy decisions. Orwell's socialism is obvious and he doesn't try to disguise it even an iota.

But the thing that Orwell does that is really interesting, is as a writer, he questions the very medium and process which he is engaged in. In 1984 but especially in Why I Write, he makes a point of using language as a weapon against language which has already been weaponised  in propaganda and which in a lot of cases has been left to wither through laziness of people. Viewed chronologically, there's kind of a hint that this might show up in future in Keep The Aspidistra Flying which was written on the other side of the Second World War to 1984.

My teenage brain in the 1990s, was taking in the effects of state communism falling apart in front of my eyes and so I was never going to be as socialist in outlook as Orwell. I was working with new information that he couldn't have conceived of and I kind of like a lot of the things that capitalism brings. I was also taking in lessons about what language was being made to do and for what purposes; maybe that's something which a high school English class should have done but we were mired in looking for motifs and themes in fiction, which is all fine I suppose but I think I'd prefer to know if the wool is being pulled over my eyes rather than exploring its texture.
I think that Orwell's essays in particular were like someone dragging a three tine cultivator through my brain. I'm sure that the seeds and weeds that would eventually lodge in there and take root but the ground was fertile. Orwell did more to shape my political outlook than anyone else and he did so by breaking apart politics' biggest tool, so that I could put it back together for myself.
Posted by Rollo at 12:27