More than half a lifetime ago, when my age began with a 1, one of the opening subjects that I did on the road to working in accounting was Commercial Law 1A. That was soon followed by Commercial Law 1B, 2A and 2B. Somewhere in there was Constitutional Law with regards companies (both proprietary and regular limited companies) and a comparison of various constitutions. That meant that as part of an accounting course, I was inadvertently exposed to the Australian, Canadian and US Constitutions.
I like the Australian Constitution. People will tell you that is called the "Washminster" system because it combines elements of the Washington (US) and Westminster (UK) systems of government but really, it is closer in spirit to the Canadian Constitution; which had already been in place and had already long dealt with similar issues.
Likewise, I do not like the US Constitution. I don't like that the President and Cabinet sit outside the Congress because that means that apart from the President, the entire cabinet is made up of non-elected people. The US Constitution is so incredibly badly constituted, that precisely ZERO countries have copied it. The US Constitution is so incredibly badly constituted, that two years after it was accepted, it was amended 10 times with the Bill of Rights and a further 17 times after that.

It looks to me that the US Constitution was deliberately designed to be terrible. The Continental Congress which had met from 1774 to 1789 in three incarnations and was basically leaderless and toothless, only really had the power to lay taxes and declare war and nothing else. James Madison, John Jay and Alexander Hamilton wrote series of essays, that were anonymously published under the handle of "Publius" to defend the document to the public through the newspapers and were supposed to write 25 essays together but John Jay fell ill after only writing 5, Madison wrote 29 and Hamilton wrote 51.
From there the US Constitution was argued among 55 men; of which only 39 survived the rigors of argument until the end and the grand idea of Montesquieu took root; which accounts for the separation of powers and branches as defined by the constitution.
Herein lies why the US Constitution is terrible.

The three branches of the US Government are slow and clunky. That's fine if you want properly written and executed legislation which has been properly scrutineered in good faith. Increasingly though, we have seen factionalism and bad faith (well actually we saw that in 1800 but...). A slow and clunky government also means that it is night on impossible to remove someone who should be removed. The US Government is like a three ring circus which is a giant menagerie of badly behaved animals.
The first ring in the three ring circus is The Supreme Court which is basically a permanently baked-in factional cesspit and this was best exemplified by the decision in Marbury v. Madison (1803):
It is emphatically the province and duty of the judicial department to say what the law is.¹
In theory The Supreme Court should be the three wise monkeys but because they're political appointments, they just like to fling poo.
The second ring in the three ring circus is the office of the President; which in 1789 was only conceived as far as installing George Washington and no further. There was supposedly talk of having Washington as an American king but I haven't found much in the way of evidence for that.
Removing a President is nigh on impossible; especially when the president is the elephant in the Red Room or the Oval Office.
The third ring is the Congress. The Congress has the power to put checks and balances on the President's picks for Supreme Court nominations; or as we have seen in recent years, grind those picks to a complete standstill. They also have the power to removed the President and Vice President but the process is arcane.

The President, Vice President and all civil officers of the United States, shall be removed from office on impeachment for, and conviction of, treason, bribery, or other high crimes and misdemeanors.
- Article II, Section 4

As it stands, an impeachment resolution would begin in the House of Representatives under whatever rules that the House Committee on Rules and then the Judiciary Committee come up with. A set of grounds for impeachment would be drawn up, wherein the House would vote on it and it would be sent to the Senate to be tried.
Under the current set of rules, an impeachment resolution needs 2/3rds of approval in the House and then 2/3rds approval in the Senate. It is so incredibly difficult that to date, in 239 years, no President has been impeached. The way things are, I think that it is impossible for Mr Trump to be impeached as well. 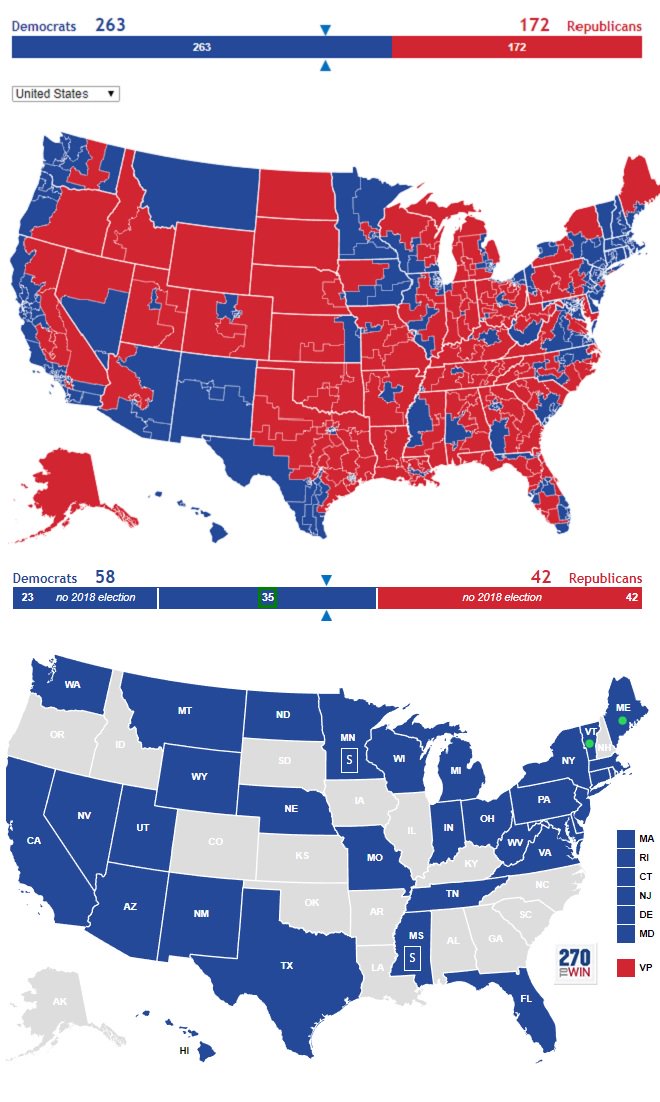 Even if you were to predict the biggest blue tsunami imaginable, of the sort that would make Hurricane Katrina and the waves look like she was walking on sunshine, the bluest of blue waves only gets me to 263 seats in the House and 58 seats in the Senate.
If the Democrats win every single tossup seat in the House and every single seat where the swing is less than 10%, then you only get to 263 seats and they need 290 to pass an impeachment resolution.
If the Democrats win every single contestable seat in the Senate, then because only a third of the Senate is up for reelection every two years, then the best the can hope for is 58 seats and they need 66 to pass an impeachment resolution.
In every single possible scenario, even if the Democrats win all 435 seats in the House and do manage to pull off a unanimous impeachment resolution, there will always be 42 Republicans in the Senate and they are 0% likely to want to impeachment Mr Trump.

It could very well be thought that my thought about the US Government being badly constituted is wrong. It could very well be that Madison, Jay and Hamilton, along with the 55 people who argued in that summer in Philadelphia wanted to make it impossible to remove Washington as President. Maybe they really did see no further than him because based on the previous Continental Congress which was leaderless and toothless, there wasn't any reason to suspect that the new experiment would be any different. Maybe they really did want a king in everything but name who was technically impeachable in theory but unimpeachable in practice.
Whatever the case, they could not have forseen the elephant in the Oval Office and the impossible task that a Congress full of Jackasses have in getting rid of him. The numbers don't work; maybe by design.