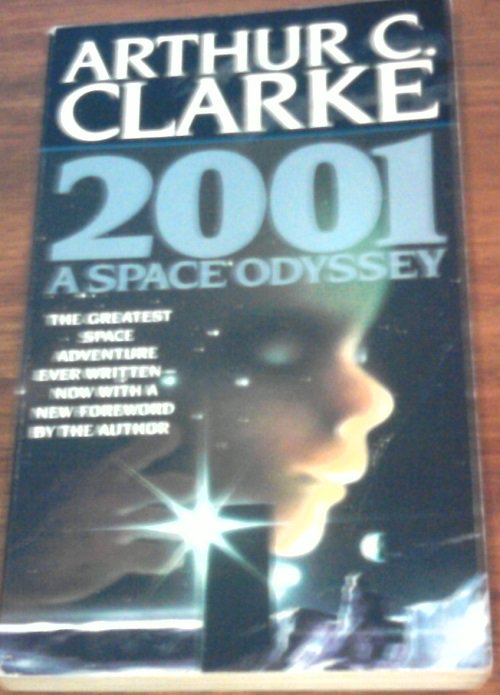 There is a good mathematical explanation why the book is almost always better than the film (see below¹); in fact, the only example that I can think of where I personally enjoyed the film more than the book, was The Lord Of The Rings trilogy because I find Tolkien's writing to be tedious. This example of 2001: A Space Odyssey is a case where I don't much like the style of writing of the book but I still mostly enjoyed it and where I like part of the film of the book but I find great chunks of it to be a bunch of eye bleeding nonsense.

The basic plot of both the book and the film is straightforward. There is a black thing on Earth called the monolith, which is discovered and more or less kicks off the technological evolution of humans. Another one is found on the moon, which in turn sets off the discovery of another one around Jupiter and a scientific mission is sent to explore it. The ship's onboard computer which has been given sentience through artificial intelligence, realises that it is unable to complete the mission because of the inherent error proneness of the ship's crew; so it kills them all except for one who manages to disable it, and that crew member goes on to explore the monolith in space, before passing through it and inadvertently evolving into the next stage of what humans are apparently.
The book has a lot to say about what it means to be human through the device of a machine which displays more human internal conflict than any of the actual humans in the book.

I think that 2001 suffers from being changed during the process of writing and as I understand it, Clarke was writing it concurrently with the film, which itself was in a state of flux due to the machinations of Stanley Kubrick. The best book in the Odyssey series is 3001 in my opinion because it reads like an old fashioned straight forward adventure novel and Clarke had finally got it right. As a work of writing, 2001 is almost a self-referential piece because it displays its own internal conflict because it doesn't really know what it's trying to be and ends up being an space adventure, commentary on human nature, warning on technology and an establishing piece of world building, but it does it all badly.
So why do I like this book and why is it important enough to make my personal list of seven? Remember the opening paragraph to this blog post - the book is almost always better than the film.

Once upon a time in the land before Eternal September and during the summer after which Win Percy and Alan Grice had won the Bathurst 1000 in an HRT Commodore, I had left primary school but hadn't yet entered high school; when someone thought that I might like to read a science fiction novel. I suppose that my nascent nerdery might have been on display, even as a twelve year old. I don't remember who gave me their beat up old copy but I can remember reading this book, mostly propped up against the door jamb of my room, while the summer raged on and ten billion cicadas simultaneously yelled into the world.
This is one of the reasons why the book is better than the film in most cases. Precisely because the book takes more time to get through and because it requires more of a personal investment of time and emotional hardware, the reward of enjoyment is almost always bigger. Also, because watching a film mostly happens inside a darkened room, there aren't really any other sensory inputs. There's not really that same sense of place or time of where and when you were when you consumed the media in the case of a film as opposed to the book.

2001 was probably the first book that I read that made me think about the act of reading a book and what that book was doing to me. I can still remember when I was becoming increasingly frustrated with Dave Bowman and then shut the book in anger because I thought I was being manipulated by the book and then realised that that's exactly what Clarke intended to do. Arthur C Clarke's intention is to make you annoyed with the almost mechanical humans in the book so that you can see the not quite humanity of the machine. I don't think that I'd ever realised before that an author not only could manipulate you but was actively trying to do so.

This I suspect is the same reason why people go to horror movies or want to watch weepy movies because they want to feel something. 2001 did make me feel something, manipulated, and I resented it. Of course in due time, I kind of grew the emotional hardware to process this and as a result, one of my favourite books is The Great Gatsby by F.Scott Fitzgerald because it makes me want to hate every single person in the whole stupid, tragic story and that includes the narrator². Clarke clearly wants to manipulate you into feeling frustrated with the crew and tries to make you feel some degree of sympathy for HAL but manages to succeed in doing neither. Having said all of that, I will still reread 2001 because it is a necessary component in the journey of getting to 3001: The Final Odyssey; which is a far better book in my not very well paid opinion.

The film of the book of 2001 is considered something of a cinematic masterpiece but as a thing which is trying to convey one of the central conflicts of the book, it fails. Granted, it does other things elegantly (such as making exceptional use of silence as a device, the fantastic use of camera angles and set design, and one of the most inspired soundtracks in cinematic history) but the one thing that it doesn't do that it should, is give that central internal conflict of HAL, his fears and overwhelming need to complete his mission at any and every cost, the necessary time and space to breathe. As a reader, that time and space is a natural consequence of the volume of time that it takes to work through it.
2001 makes this set as an object lesson for why the book is better than the film, even when the book is a little bit naff.

¹Does Hollywood ruin books? - Numberphile https://www.youtube.com/watch?v=FUD8h9JpEVQ
²Nick Carraway fawns over Gatsby, hates Tom and is constantly drunk; which clouds his narration. He is a terrible narrator and hideously unreliable.
Posted by Rollo at 12:12