This isn't some rant about how daylight savings time is bad because although that's a long established trope of which I could very easily riff upon, I have probably made those jokes before. Go back through the archive of Septembers past¹ and you'll probably see this kind of thing. The fact is that I like long daylight tails in the evening because it means that Day/Night Cricket happens in the summer, that the A-League can be played late in the evening. Daylight Savings is demonstrably useful.
This blog post employs another long established trope; that of proof of a seemingly stupid proposition. 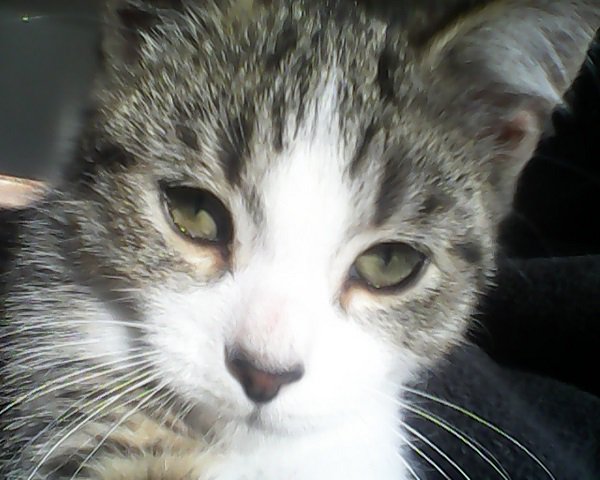 - Look at the Kitty picture! :D

My alarm is set for 05:47am. In the middle of winter, 05:47am is before sunrise. The first thing that I do in the morning after I wake up is feed the cats their breakfast. Purranna has a collective memory of about 3000 mornings; so she is well aware that she will get fed after the alarm goes of at 05:47am. Micah on the other hand has not. If the beginning of daylight comes through the window, then he is awake and as far as he is concerned (and he is very concerned), when he is awake, then it must obviously be time to eat.
The alarm is not relevant to his interests. My sleep is not relevant to his interests. When daylight comes through the window, a cat whose motto is "Enjoy Everything!" and who is only operating on pure id (ego and superego do not wake up until much later), only has one relevant interest and that is to be fed now.
As someone who has never lived through a summer and who doesn't understand or care that sunrise is getting earlier, Micah gets really annoyed that we also have not woken up with the sun. The thing that is relevant to his interests when the sun rises and is immediately applicable to his life motto of "Enjoy Everything!" is to be fed there and then. The fact that people don't wake up until 05:47am is irrelevant and even if it was, would be in direct conflict with his life motto; so he has a whinge.
We have now passed into that time of year when sunrise is before 05:47am, which means that I am now consistently woken up by the sounds of a small cat demanding to know why the world isn't directly conforming to his interests immediately.

Daylight Savings Time borrows that first hour of daylight and then saves it until the end of the day. Immediately, the clock time for sunrise is pushed back an hour and since Micah neither knows or cares about clocks, it means that his effective wake up time as far as I'm concerned is an hour later. When Daylight Savings Time does start in October, my wake up time will revert back to 05:47am instead of whatever time is going on inside a small cat's mind².

Given enough summers and winters and the fact that in time Micah will be an older cat, I'm pretty sure that this issue will go away... or maybe it won't. His life motto is "Enjoy Everything!" and as far as I can tell, everything which doesn't enable him to do that, including me being asleep in the morning, must be railed against.

Do not go gentle into that good morning
Young age does burn and rave at opening of day;
Rage, rage against the coming of the light... and against those who will not feed you immediately.

¹The Ghost of Septembers Past is mentioned in Charles Dickens' non specific seasonal story about Fred Scrooge, the President of the Melbourne Demons Football Club; who is visited by two of the usual ghosts but not the ghost of September Future because ghosts know that the D's aren't likely to win a Rules Grand Final any time soon.
²This is probably subject to several iterations of the Heisenberg Uncertainty principle. It is uncertain what goes on inside a cat's mind and if you were to observe it, it would still be uncertain.
Posted by Rollo at 07:17