Someone recently asked me why I don't post very many pictures on Facebook. This would have been unthinkable in the not too distant past but the question is certainly worth asking in an always online and switched on world. I guess that it somehow seemed strange to them that I didn't have or want a smart phone and that it was really weird that I didn't feel the need to photograph all of the important moments of my life. Mind you, I find it strange to think that just a quarter of a century ago, most people didn't even know what the internet was; ten years ago the big platforms like YouTube, Twitter and Facebook were all just wee ickle noobs in the internet world and now they are worth billions and trillions of dollars; so this impulse to photograph the world and share those photographs had no outlet.

There are children today who don't know a world that never had continuous all the time connectedness and the internet itself doesn't even exist outside of social media for many people. I mean they could go outside the ecosystems of their chosen apps but they do not. I must admit that I personally have retreated back towards the old media of newspapers and radio for my primary sources of news because the news that is dished out on social media is generally far too shallow for me to brood over. I suppose that I have to admit that as the number of years in front of me is almost certainly fewer than the number of years I've seen, that I am old. The world is moving on and I no longer fit the future. Although having said that, I didn't really fit the past either. I have long suspected that I actually belong either London or New York City in the 1920s.

That isn't to say that I don't understand the internet and social media. I think my problem is that I understand it only too well. The whole point of Twitter and Facebook is to keep you scrolling; the whole point of YouTube is to show you another video so that you will see yet another advert.
Once upon a time, media companies made radio and then television programs and tried to keep people in front of the magic boxes in their front parlour by making content that people might like to see and hear. Long form television has been kind of replaced or added to by Netflix, Hulu, Stan, or a bunch of other streaming services. In contrast, YouTube has made forays into that by democratising content creation and Facebook and Twitter are kind of repositories for short content.

A platform like Twitter by its nature is similar to the announcement boards at an airport. In an airport, planes arrive and take off and the announcements go through a regular cycle of initial broadcast, a few calls and then usually when the plane takes off, that particular set of announcements disappears forever. As far as Twitter is concerned, a hashtag works like a flight number and it is only when something terrible happens that the people in the airport get mad. A hashtag such as #AusPol is like a regularly scheduled flight, like say QF5 which will reappear on the boards with reliable regularity.
Journalists very quickly realized the value of Twitter and it is telling that I've now seen several elections play out in real time on Twitter and the knifing of several Prime Ministers. Twitter is the perfect vehicle for the political cycle, it is the perfect vehicle for the news cycle, and this is the reason why the 45th President of the United States makes such an excellent use of the platform. Granted that his administrative skills are non-existent and this makes for a bad Presidency but on this front, he understands how and why the platform works the way it does.
The thing about Twitter that people who enjoy using (like me) realise pretty quickly is that the outrage of a thing being bad goes away. From the outset, news outlets saw the value in the platform and that Twitter fit very nicely with the news cycle. The normal maximum period of time that a thing is an issue on Twitter is usually no more than a few days. Within a few hours of the event ending, the currency of that event and hence the frequency of hashtags being called on the departure boards of Twitter, dies a natural death.

Facebook feels vastly different and even feels like a vastly different space from when it began. I can't say that I am a very good Facebook user.
Only recently, I have been pulled back into the ecosystem of Facebook because it has disabled the old third party mechanisms which enabled me to remain outside of it. I find things like Facebook and Instagram problematic (even though I don't use and have never used the latter) because of the intersection of curation, narcissism and popularity, and I am not sure what that is doing to people's brains.
It seems to me that Facebook and Instagram are kind of the repositories of a very specific section of people's lives. There is a constant stream of people looking happy and the impression which is given out is that everyone else is living fantastic lives but you are not. Of course it stands to reason that people are only going to post pictures of their holidays, or how proud they are of their children, or of their nights out, amazing breakfasts. From what I have heard, Instagram is even worse with people staging photographs and this can only lead to a plastic impression of the world.
People don't post the rolling mundaneness of their lives to Facebook or Instagram. People don't generally post about their troubles, their sadness, and their frustrations; for fear of being shot down or worse, being ignored. In a world where it is perceived that everyone else is living the best life that they can, if you are not, it is very easy to be pulled into your own personal funk because compared to everyone else; you look to yourself like a colossal failure.

The reason why I don't post a lot of photographs on Facebook is because my life doesn't tend to produce those moments terribly often. I don't go on holiday all that often and when I do, I am on holiday and prefer to be on holiday. I don't have children and so photographs of the birthday parties, sports days, school achievements, or cute baby moments, are incredibly difficult to take, nay impossible (even though the idea of photographs of non-existent children sounds like a brilliant idea for a Nordic Noir crime series).
According to the unwritten rules and criteria which Facebook and Instagram put forward, my life by the metric of popularity, likes, grams (I don't know what the cool kids say on Instagram) is a colossal failure; so for me to post photographs of the rolling mundanity is also a colossal waste of time.
To be fair, I don't really care either; because as this post demonstrates (and indeed the not quite two and a half thousand posts over twenty years), I would rather take in the world at the speed of text.
My brain has been spending the last thirty odd years wiring itself up to draw its dopamine from different sources; primarily the written word and the radio. I am probably the most happy most of the time when I am either reading something, writing something, or listening to something while doing something else. Sweeping the house on a Saturday morning while listening to the NPR Politics Podcast repeatedly presses my happiness buttons but that's not exactly worthy of posting photographs on Facebook for. I could take a photograph of a dustpan and brush under the couch but that seems like a colossal waste of time, see above.

So then... people of Facebook. Here is a picture. 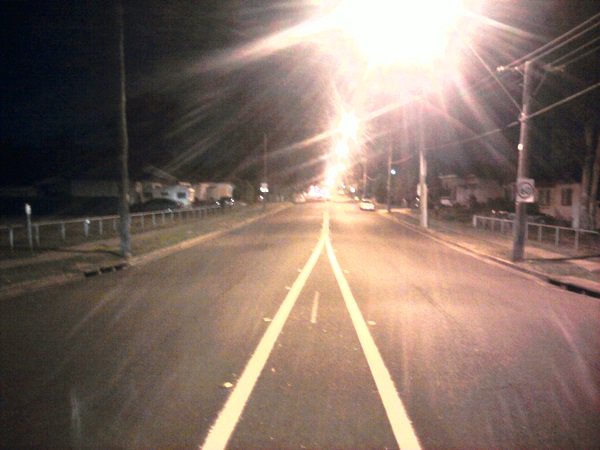 I don't post pictures to Facebook very often because pictures never do anything justice. I don't believe that a picture paints a thousand words because I know what kind of pictures a thousand words paint. Pictures are like trying to make me suck on a lollipop when what I really want is a nice Rogan josh. Pictures are even more of a blunt instrument than words are and words are already like trying to stitch a seam on a pant leg with a cricket bat (it's obvious that I have no idea what I'm doing with either).
I don't post very many pictures on Facebook because I already keep a blog and write and have done since before there was a Facebook, Twitter, or YouTube. Most people only want to look at the pretty pictures though; which is fine. I am not you. My brain does not fit here. My brain wants to live in the land of a thousand words.
Posted by Rollo at 07:17