Horse 2461 - 7Books: The World According To Clarkson, Jeremy Clarkson 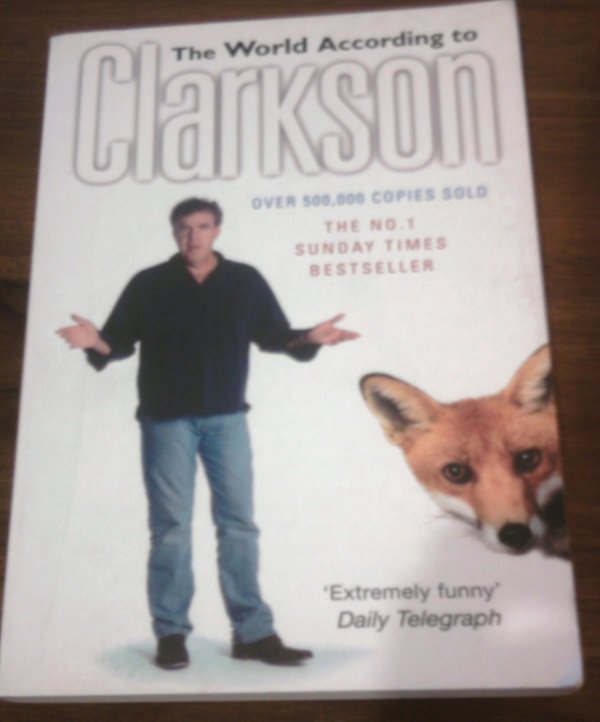 Given the more than 2000 posts here over the years it shouldn't be surprising to anyone that I like cars. I like watching motor racing, I like reading motoring magazines, l like looking at traffic, I like driving and I like driving even when I'm stuck in traffic. I like the styling, the technological aspect, the industrial design problems posed by trying to fit stuff inside a motor car and I like the dumb fun that comes front taking a road trip, more than I like the destination.
It should therefore also be of no surprise that a motoring book should make this list. What might be of surprise though, are the reasons why I should pick one by Jeremy Clarkson.

The first thing that you learn about Jeremy Clarkson from his motoring columns in the Sunday Times and his tweets on Twitter, is that Jeremy Clarkson on TopGear is kind of a caricature of himself. If you cut through the terribleness surrounding bad behavior and a media circus that has no desire to report truth whatever that may be, you learn that the thing that worries him the most is the welfare of his children. The second thing that you learn, and in takes a while to pick this up, is the reason why he got the gig on television in the first place; that is that he was a feature writer for a newspaper and was given ample time to breathe as a writer.

A normal newspaper columnist will start out as a pavement runner, visiting all of the boring places and doing the grunt work of journalism. They will attend council meetings, court cases, accidents, sporting events and everywhere that the newspaper needs a pair of eyes and a pen. Clarkson started out as a cadet journalist in Rotherham; which sounds to me to be less exciting than watching paint dry but not quite as boring as waiting for it to peel. I've seen this in my local newspaper, that a lot of the job must involve meeting a lot of grumpy people who are grumpy over really petty and insanely small things (but not in their eyes) and taking photographs of those same people looking grumpy and/or pointing at things while looking grumpy.
Exactly how Clarkson made the leap from the tedium of provincial news to a national newspaper is unknown to me but it must have given him the necessary skills via osmosis of how to write copy and make a story which actually only deserves fifty words, run out to fifteen hundred. As someone who might have had the nascent skills to be a journalist had I been born fifty years earlier, I appreciate the skills on display where a small thing is spun into a larger thread upon a spinning wheel.

All of this by way of introduction is instructive as to why have put one of Jeremy Clarkson's books on this list. Clarkson is first and foremost a journalist who happens to have specialised  in motoring writing. As a motoring writer,  he spends surprisingly little time writing about motor cars but rather spends more time telling stories. The truth is that it is mostly impossible to convey how a car feels to drive and it's going to be immensely subjective anyway. It is also incredibly boring to most people to read about statistics like power, torque and 0-60 times, unless you are something of a nerd.
Clarkson likes to feign a kind of ignorance when it comes to anything technical despite being in the business of doing motoring journalism for more than two decades. You'll frequently read the words "horsepowers" and "torques" before he might launch into a description of a Short And Long Arm Suspension system that some German marque has installed on their latest alphanumerically named luxobarge.
What Clarkson does best is torture metaphors to the point of breaking, makes hyperbole sit up and beg, and runs around waving the banner of old cobblers. At its heart, that's what the majority of motoring writing is - a fully palletised, packed and ticketed, barcoded, addressed, and containerised, load of cobblers. This is perfectly acceptable for a motoring column but would be inappropriate in other subject areas.*

Given that Clarkson does write a load of cobblers (and he's aware that he mostly writes a load of old cobblers), that should justifiably invalidate him from this list; except it doesn't. The biggest thing that Clarkson taught me as a writer (albeit one who primarily writes for my own amusement) is that there is a distinct rhythm and beat to middle to long form journalism. Just like the majority of Hollywood films are basically 90 minute four act yonkomas, a fifteen hundred word column comes with an establishment paragraph, stumbles its way through a number of paragraphs while collecting plot tokens, before cashing them in for a payoff am the end which is almost always flat. There is also a distinct turning point in a piece where you know that the payoff is coming.

The truth is that I often disagree with Jeremy Clarkson politically, I find some of his analogies needlessly crass, and I think that his columns dwell far too much in the realm of supercars which normal people will never own (though given that they appear in the Sunday Times, which is primarily written for "the City", then this is understandable) but the fact remains he is very good at the craft of journalism; which is why TopGear on with Clarkson, Hammond and May was so successful - they all were.

I know that this isn't specific to Jeremy Clarkson's books but they just happen to be the ones that I own the most of this type, that the idea of collating what are stand alone pieces into a book is viable. Granted that every book of newspaper comics is this very same thing and the transcripts of Clarke and Dawe are also this same thing and even Shaun Micallef's book "Smithereens" is even more fragmented but is this very same thing, this at least shows me that if I ever decide to publish these ramblings, then the format is not unfamiliar. The inclusion of this book is probably more to do with the inclusion of a type of book but in this particular instance, form is function.

*I'm looking at you Miranda Devine. You are a bad political opinion writer but might be all right as a motoring writer.
Posted by Rollo at 07:17