The Festival Of The Vote Part II (The Fall Of The Coal Eaters), is well and truly underway with the bout to knock the other out, finally taking place in the ballot boxes and booths across this wide brown land, on May 18.
In the blue corner, weighing in at less than 18 months, is the man who got the top job after Top Hat Turnbull stared down a challenge from Spud Dutton and the thristy knife of Australian politics took out yet another Prime Minister. In the red corner, having got the job back in 2013 after Second Shot Rudd walked away from the arena having lost government, wandered off into the wilderness, is Blue Shovel… or is it Blob Spooten? Whatever his name is, he is a man so devoid of personality that he will more than likely walk right into The Lodge by simply being unmemorable.

I live in the bogan western suburbs of Sydney, where apparently nobody drives because as former Treasurer Smokin' Joe Hockey said "poor people don't drive cars"; which is odd because NSW Premier Gladys Berejiklian has deliberately chosen not to connect the North West Metro to the Richmond Line, thus ensuring that we are forced to. I also live in an electorate where the Labor Party has held the seat since Federation; we are so rusted on that we're indistinguishable from the steel plate.
In stark contrast, I work in the Insanic Republic of Mosman, where everyone drives motor cars because they do not like having to share public transport with the poors, the bogans, and me. This is a suburb which has only one socio-economic class within its confines and where a bucket of an unconfirmed substance has been the Member of Parliament for the area since before Generation Z was a twinkle in their parents' eyes.

I have been employed within this electorate since 2003 and in that time I have only seen the local member of parliament twice. Once was during a ceremony when the naval unit at the end of the peninsula was given the freedom of the municipality and the other time was when the local member was having a tilt at becoming leader of the Liberal Party, en route to becoming Opposition Leader and then the Prime Minister.
Just like my electorate is so rusted on that it is indistinguishable from the steel plate, the electorate that I work in is also so rusted on that it is indistinguishable from the steel plate on the other side of the political divide. Not bothering to do any political campaigning in the electorate of Warringah has been a rational decision because actually doing so would have been a waste of both time and resources. That is until now.

In the decade and a half that I have been working here, I have never seen anything like this degree of political advertising. For two of five elections, the sitting member here was the Federal Minister for Health. At two elections, he was the Opposition Leader who had spent more than three years trying to lead the party to Government. I think that it's fair to say that the local member of the Liberal Party in Warringah has been responsible for bringing down five of the past six Prime Ministers (including himself) and has been quietly causing discord from the backbench against the sixth. There has never been any campaigning on the ground in this electorate the past 16 years that I have been working here because there has never been any need to. I'm also prepared to say that there hasn't been any need to in the quarter of a century that he has been the federal member either, and I'm tentatively going to suggest that this has also been true since Federation since 1901, that this electorate has always voted in the same broad direction.
That is exactly why the local branch of the Liberal Party is now running scared. Whatever the unconfirmed substance is that is in the bucket is, it is now starting to get on the nose of the electorate. You can only keep a  bucket of a stinking unconfirmed substance on the seat in the House for so long before someone finally decides to throw it away. This electorate will not ever vote for a member of the Labor Party (mostly because the people of this electorate have never done an honest day of real work in their life and have real disdain for those who do real work) and so the first real threat comes not from the other side of the political divide but from someone on the same side, in the form of Olympian and Bronze Medalist, Zali Steggall. 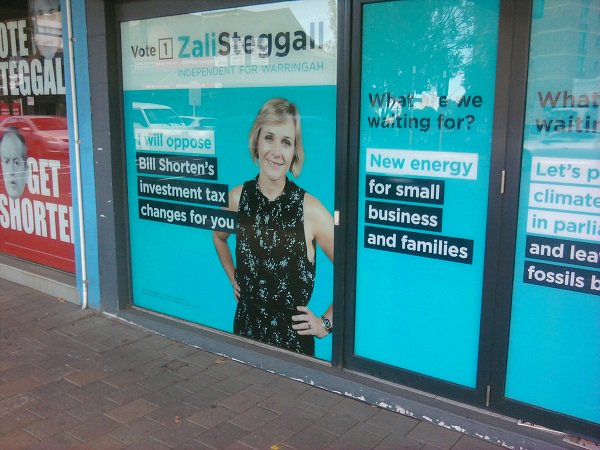 To be fair I don't know what Zali would stand for inside the parliament because she doesn't have a political track record but what she is offering for the first time in a generation, is the chance to be represented by a local member who is going to bother about the electorate. I don't think it too much to ask from the local member of parliament to care about the issues and concerns of the constituents. For the first time in forever, a candidate who is a credible threat to the local branch of the Library Party is offering a pair of ears that listen to the electorate, and that's terrifying to the Liberal Party. Their response though has been not only bordering on insanity, it has had its passport stamped so many times from crossing the border, that I'm wondering if it is a secret agent.

First we had the local member advertise for an unpaid internship, which if you read through the conditions of the contract, openly violated the Fair Work Act.
Then you had someone walking around the electorate dressed up as "Captain Get Up" which is supposed to be a parody of the Get Up organisation. I have never been sure what the point of this was and I'm not sure about the effectiveness of a political campaign if you question whether or not it is a work of satire. Stranger things have happened though because a reality TV star and a comedian have both been elected as presidents of nations since the last Federal Election in 2016; is Captain Get Up making the point that democracy is a joke?

The advertisements within the electorate have been equally confusing. Rather than try to put forward the qualities of the local member which are advantageous and beneficial (one can only assume that the incumbent member doesn't have any), most of the adverts have been trying to persuade people that a vote for Zali Steggall is somehow risky. 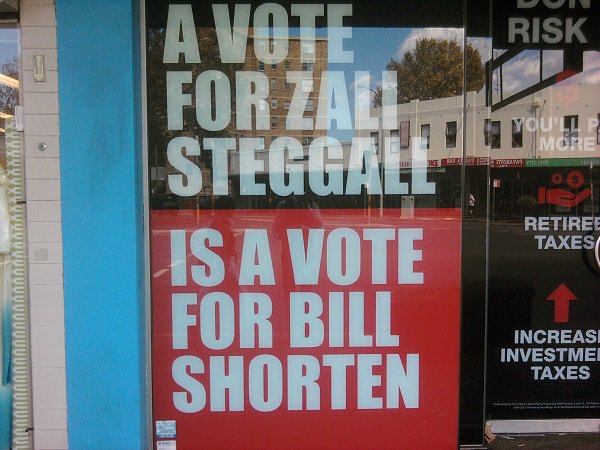 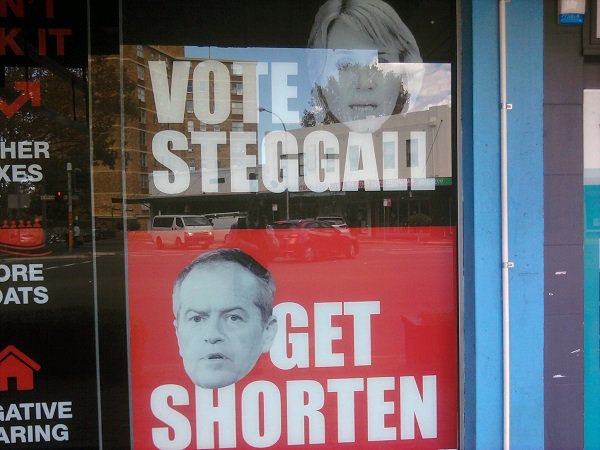 What exactly is the message here? I personally think that Ball Sporting has the charisma and personality of a housebrick, however, I would rather have someone who was boring and competent in charge of the nation than have a charismatic dropkick of a knave in charge. Who exactly is the Liberal Party advertising for here? Presumably if you'd had enough of the carry on from the sitting member, this election would just solidify your resolve to get rid of him and Zali Steggall would give you the means through which to do it.
A vote for Zali Steggall is a vote for Bell Splitting? If you are a disaffected voter, then great! Where do I sign up? 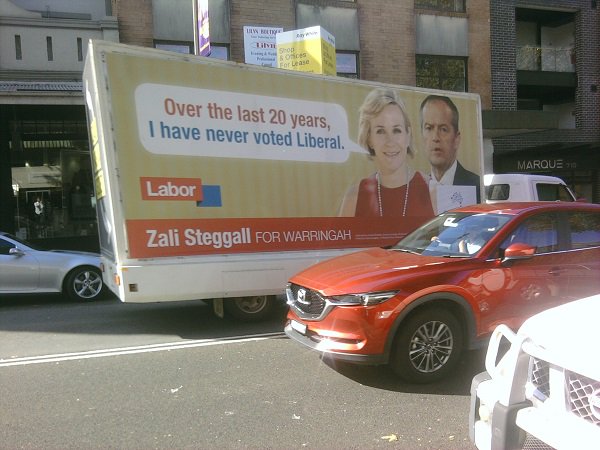 As if that works for weren't enough, the Liberal Party are paying for mobile billboards to be driven around, with the Labor Party logo on the side, and Zali Steggall isn't even running as a Labor Party candidate. The Labor Party candidate for Warringah is so anonymous that even after walking past the pre-polling station for almost two weeks, I still have no idea what his name is. Admittedly this is electorate is so rusted on that the Labor Party fielding a candidate is a waste of time and money but when your rivals are paying for the billboards that go around with your logo on the side, you'd think that you'd put in a token effort. 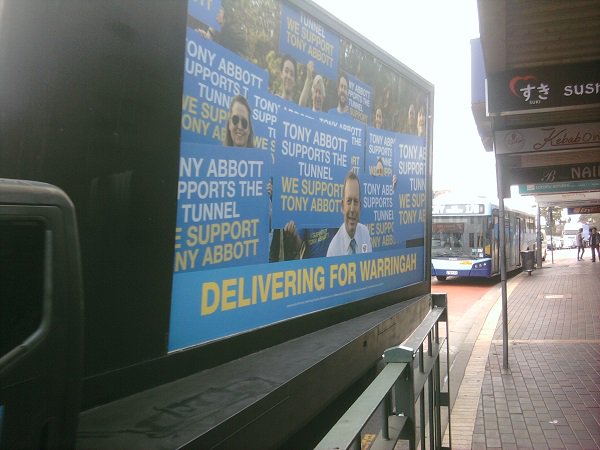 As for the billboards with the sitting member of parliament's face on, they are an exercise in surrealism; as he supports a project which is as impractical as it is expensive and as likely as a Labor Party candidate ousting him. Again, when you have an ex-Prime Minister, with a ridiculous level of name recognition, in a blue ribbon seat which has never flipped red in 119 years, I just don't understand what the point of this billboard is.

If Zali Steggall happens to become the new Member for Warringah on May 18, it will be newsworthy in itself but it will also be noteworthy for being an election which on the ground and in the electorate, was one of complete cluelessness from the local branch of the Liberal Party. They have probably never fought a real election campaign and it looks like they have no idea about how to go about doing it. If the incumbent member is returned, then despite his party and his own efforts to seemingly lose the seat, then we can assume that the seat is so rusted on that it is actually part of the steel plate; impervious to logic.
Posted by Rollo at 07:17

Nice article that you have shared here. Thanks for sharing this valuable article I like your way to described your service here. If anyone interested to know more visit here: