From what I am led to believe through looking at the signs, reading the indicator board, reading the timetable, and even the physical manifestation of something absurdly like it, there is supposed to be a thing called the B1 bus to Wynyard of an evening, from Spit Junction. 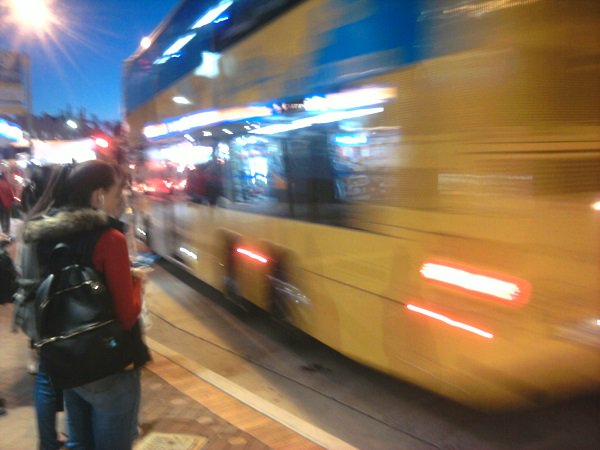 You can see it, touch it, and perhaps even be run over by it but if you try to get on it, then you will be consistently told that it is full and you will not be allowed on. Owing to the fact that I am a snark filled eejit who writes for comedic effect, I have been tallying all of the B1 buses which have deceived me and have turned out not to have existed. In the past fortnight, I have not successfully managed to get on a B1 bus and have been left behind by 13 of them in the past fortnight. This is curious as I have successfully managed to get on exactly 10 in the past fortnight of the B1 bus' cousin which goes the other way to Mona Vale, in the morning.
Instead, I have caught the 168, 174 and 180 all going to the City in place of the B1 bus; which I estimate thus far, not to exist.

Back in Year 11 and 12 Physics class, a friend of mine called David, came up with the theory of Davidtron. The theory is that that if you aren't able to observe an object, then it is made of small Chihuahua shaped particles called Davidtron. I love this theory because it is impossible to disprove. The instant that you observe the thing, then it immediately stops being made of Davidtron and is made of whatever it is normally observed to be made of.
I love this theory because it is like the rather famous piece of philosophical paraphernalia of Bertrand Russell's Teapot², which totally exists somewhere between the orbit of Mars and Jupiter and is also impossible to disprove the non-existence of therein.
I suspect that the B1 bus is perhaps made out of some eerily similar philosophical substance to Davidtron because although I think that I observe the B1 bus to the City, I'm pretty sure that it doesn't exist because if it did, I would be able to get on it. The fact that I can not get on the B1 bus to the City leads me to believe that my observations, such as looking at it or touching it, must be faulty. If I am being diesel-lighted¹ by a bus, then I will be pretty mad about it because making me question the nature of my own reality is pretty serious stuff.

If the nature of reality is pure subjective fantasy and space and time and here and now are only in my mind, then I am in the land of the Society Of The Perpetually Bewildered again. Moreover I have started dancing into the land of solipsism and am starting to question whether or not I exist. I have to bring into question whether or not my own thoughts are even real since not only can the outside world not be verified without some observance but the things which are doing the observance are probably part of the outside world.

Forget René Descartes' philosophical proposition of "Cogito, ergo sum" when translated into English is usually rendered as "I think, therefore I am"; the 'therefore' can't logically be made to follow if 'I think' can not be verified. To actually verify whether or not 'I think' is valid, must invariably require some outside entity, and I suspect that the category of outside also happens to include my own brain, since I think that my mind and brain are two separate things.
What must follow is that any and all observations that I make, must at some point be unreliable. I think that it is easier to make the leap from an unreliable set of observations to the point where you doubt the existence of a thing, than it is to say that a thing exists which is impossible to verify.

All of my existential knavery will of course be proven to be a complete load of bunk if I somehow manage to actually get on the B1 Bus to the City. We famously had one of those moments in science when science first denied the existence of the black swan and then when white people showed up in Western Australia, they found loads of the little black squawking eejits. Naturally, owing to some obscure swan law which meant that all swans were owned by the monarch, the discovery of the black swan was then helpfully able to be proved to exist by the Royal Society; I bet they were delicious.
The invention of the black swan, was presumably in the late 1700s, thought to nothing more than the dreaming of someone's mind; I'm not sure if anyone actually thought that they genuinely existed. I suspect that the B1 Bus to the City is the mass delusional dreaming of lots of people who have collectively been convinced of its existence. We can all describe it because we have seen other double decker buses like the 607X to Castle Hill; so we have a pretty good idea of what the B1 Bus to the City is like but it can only be at best, speculation. Should I actually be allowed to get on the B1 Bus to the City, then my dreaming will have been been made as redundant as a 1700s imaginary black swan. So far, that hasn't happened yet.

¹kind of like being gaslighted but with diesel power³.
²you can buy Russell's Teapot from philosophical hardware store. Price £17.29
³blows your mind drastically, fantastically.
Posted by Rollo at 07:17