Actually nothing. It's just that nothing actually happened.

The 2019 Federal Election has been a veritable boon for the owners of the Liberal Party, News Corporation. I think that we have seen a brilliantly stage managed sense of panic, which has been translated into a dramatic win; so that they can then paint their political wing as underdogs and heroes. Scott Morrison has more than likely been returned as Prime Minister because unless there is an all out coalition of chaos which by their powers combined, pull together to support the Labor Party which is currently leaderless, the chances of a not Morrison Government now are in the hundredths of a percent.
I kind of feel that the public have been played for fools. I'm openly wondering if News Corporation was playing a long game all along.

The 2019 Federal Election looks for the most part, largely the same as the 2019 NSW State Election; which was painted as a possible Labor victory in the last few weeks of that campaign too. Instead, the NSW Election turned out to be one of the most boring election nights in living memory.
What we saw in New South Wales was almost nothing, happening slowly. Apart from a few rural constituencies which moved from the Liberal Party to the Shooters and Fishers, the NSW result everywhere else was practically identical to the previous election.
What we've just witnessed federally is a similar story. The difference at the national level though is that the minor parties votes didn't equate to seats.

After the redistricting of seats, South Australia lost one, and the ACT and Queensland both got an extra. The nationwide result looks like it will be a mutual swap of seats between Labor and the Liberals in Victoria, the net geographic transfer of seats from South Australia to the ACT, a mutual swap of seats between Independents and the Liberals in New South Wales, and the net winning of rural seats in Queensland, for the LNP from Labor.
The story of this election really does come down to nothing happening anywhere except for rural Queensland.

Queensland has quietly been drifting to the right for about 20 years and nobody has seemed to care much. The Sydney-centric and Mel-centric media, which which mostly doesn't seem to acknowledge the existence of anything outside of the inner suburbs of their two cities, has no idea that Brisbane is a one newspaper town, that the Courier-Mail is the biggest and only major newspaper for millions of square kilometres, and that 4BC and it's affiliates is the biggest driver of political opinion in Queensland. The ABC whilst it is everywhere is insanely political neutral, and the online presence of The Guardian may as well not exist. The three free to air television networks have for the most part abandoned serious journalism and their news collection seems to be restricted to ambulance chasing. Nevertheless, their contribution to the election campaign was to provide a platform for a former marketing manager to do some marketing, and for a union rep to look all serious. It turns out that even in a democracy, the people will still willingly choose a salesman over an engineer.

As Queensland drifted off to the right, the wedge parties in Queensland became One Nation and the United Australia Party. That is literally inconceivable to people of the inner suburbs of the big cities and especially Sydney and Melbourne. Not only is the thought that Queensland more nativist than the rest of the country repulsive to the progressive voters in the cities, but the thought that people might vote for the hope of a job in the short term over the long term cost of the environment is also repulsive. There is a kind of othering going on here, which has been exploited beautifully at the ballot box.
The other thing to remember about Queensland is that the LNP isn't really a Liberal/National coalition but rather the National Party with fancy funding from Sydney and Melbourne (and loads of help in kind from News Corporation and Macquarie Radio). People tend to have short memories but it was the National Party who ruled in Queensland without being in coalition with the Liberal Party for many years. The Liberal Party in Queensland had to come crawling on its hands and knees for formal absorption after the 1998 Queensland State Election when it suffered political extinction. The LNP in Queensland is almost exclusively the old National Party but with the Liberal's cash. This is quite effective.
What we've seen in Queensland is the LNP tracking in the low 40s, with Labor on about 30 and One Nation and the UAP both making up a shade over 20% combined. The preferences of those two sets of voters are tending to the LNP and time and time again, Queensland rural seats are being won on second preferences. People vote for their respective angry loud party as a protest and then put the LNP in as Number 2. Preferential voting is working exactly as intended because with one person one vote, even on second preferences the winning candidate still has won the approval of the electorate.

What went wrong for the Labor Party? The answer is ludicrously simple. They forgot that they are the Labor Party. Remember, the Labor Party was founded in rural Queensland and first started to win elections because it campaigned on the fundamental issue that people need to be paid a decent wage for doing a decent job. It gained support during the twentieth century by also arguing that it decent for decent people to have decent stuff like electricity, water, education and health care.
The 2019 campaign and the 2016 campaign before it, have been kind of a devil's dilemma for the Labor Party. They can't argue about issues like the environment if at the same time this runs counter to people being employed. Any campaign to raise taxation from any source will be met with hellfire from News Corporation and Macquarie Radio who actually are the biggest influencers of older people. As much as this is going to annoy people, identity politics is actually only worth about 0.5% of the vote. The same-sex marriage debate, evolved into precisely one seat changing hands ever and even then it was because the local member had been there for 25 years.
At the same time, the Liberal Party has benefited from the nativism and lunacy of the hard right. The hard right will naturally vote for someone promising to act tough towards foreigners even if that means voting against their own financial advantages and interests.

Throughout the campaign, the three big polls of Newspoll, Ipsos, and Galaxy, all had the Labor Party tracking at about 52% of the primary vote for about 18 months. Had that translated into a nationwide result, then the Labor Party would be looking at about 80 seats. Instead they polled at figures which were mostly identical to the Liberal Party, except in Queensland where they ran at a primary vote of about 36%.
Therein lies the story of the election and why the three polling companies can  basically be considered as unreliable from now on. If the polling companies spend money but still can not produce accurate data, then what they have made is nothing more than beautiful garbage.
I find it incredible that the big polling companies predicted that something would happen when the final result was that almost nothing did at all. For all three big polling companies to get the prediction so hideously wrong either suggests that there is something wrong with their data collection methods or that they have misunderstood how the mechanics of the House of Representatives works. National polls simply do not drill down into uniform swings nicely. Did any of the polling companies actually send out boots on the ground to rural Queensland? I doubt it.

There is one measure which has predicted the result of every election going back to 1996; that is the endorsements of the daily newspapers. While newspapers don't have the same hold on the news cycle that they used to, News Corp, Nine Entertainment which now owns what is left of Fairfax, and Seven West Media are all integrated with a television network to some degree.
If you assign a simple +1:-1 to the ten biggest newspapers in the country, then you get: 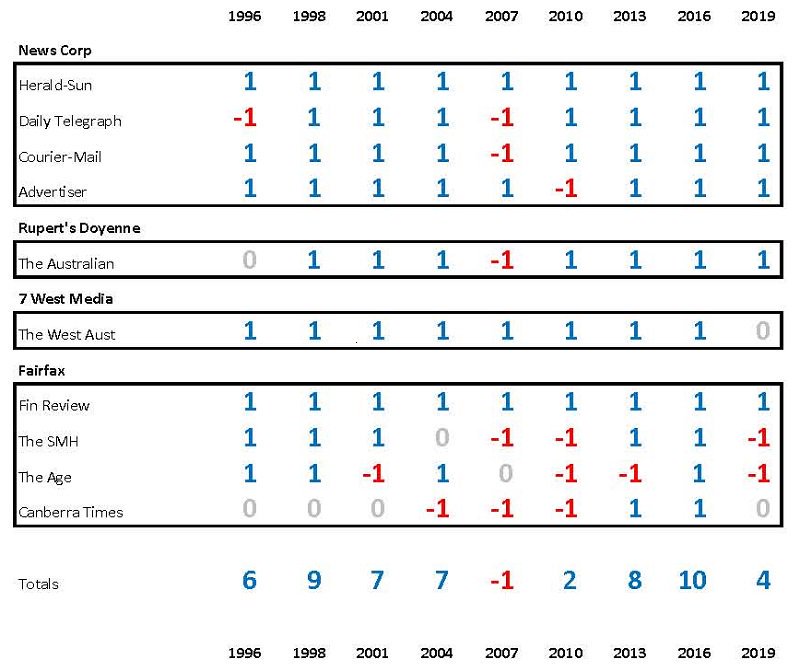 With the exception of 2010, this blunt instrument has predicted the result every time. In 2010, it still predicted the popular vote but with an exactly split hung parliament, couldn't predict what would happen inside the corridors inside the house in the hill.
That's why I'm openly wondering if we've been had. Newspoll in particular is probably a good measure when there are literally zero stakes and nothing to be won. I bet that the next Newspoll will still show that the Morrison Government is unpopular. What the polls don't tell you is that the voters were voting in the way that they were told to by the media; and for the ninth time in a row.

Labor wasn't punished for running a bad campaign and the Liberal/National Coalition weren't exactly rewarded either.
As bizarre as this sounds, on first preferences, the Labor Party has gone from 4,702,296 to 5,170,950; which is an increase of more that 460,000 votes since 2016. The Liberal/National Coalition has gone from 5,693,605 down to 5,396,030; which is a loss of 297,000 votes since 2016.
Nothing has necessarily gone wrong here, expect perhaps for the polling data; which appears to be completely unreliable now.
Posted by Rollo at 07:17