We've witnessed something of a demolition in this years' Supercars championship.  So far the brand new Mustang has won 11 of 12 races, with  DJR Team Penske's Scott McLaughlin winning 8. Naturally this has caused outrage, particularly by rivals at Triple Eight Race Engineering but Scott McLaughlin did win the championship last year, was 2nd the year before that and 3rd the year before that; so it could all just be that it is him who has peaked.
It could also be that the Mustang is just miles ahead; and that could be a problem which is all just a little bit of history repeating.

The 1993 Australian Touring Car Championship was the first year of the Australian Group 3A Touring Car category which replaced the FIA Group A touring car category. The reason why Group 3A rules replaced the FIA's Group A rules, was that the local manufacturers of Ford and Holden, had their butts firmly kicked by the Ford Sierra RS500 Cosworth and the Nissan Skyline GT-R (R32); the latter being designed from scratch with the express purpose of winning Group A racing; which it comprehensively did.
However, in 1992 the dominance of the Nissan GT-R wasn't exact; throughout the season wins were chalked up by the Ford Sierra, BMW M3, and Holden Commodore VL Group A. If you want to demolition of a season by a marque, you need to look at 1988 where with the exception of the Oran Park 250 and the F1 Australian Grand Prix support race where the big teams couldn't be bothered to show up, the Ford Sierra RS500 Cosworth ruled the roost; winning every round of the Australian Touring Car Championship as well as the Sandown 500 and Bathurst 1000.
In the 2019 Supercars Championship which is the current iteration of the Australian Touring Car Championship, we are witnessing a demolition not seen since 1988.

In fact we are seeing so much of a demolition that the Supercars organisation has had to claw back the advantage of the brand new Mustang and the people at DJR Team Penske and Ford Performance are spitting chips. 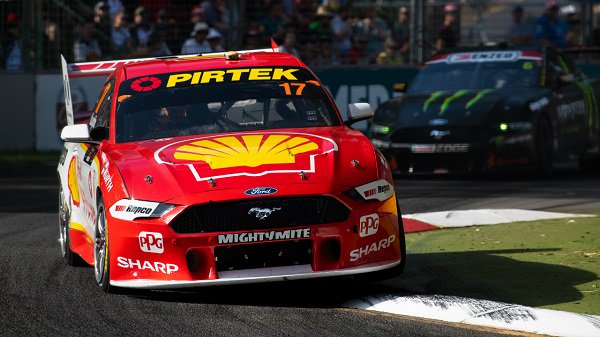 https://www.supercars.com/news/championship/fords-full-statement-on-mustang-tweaks/
"The Mustang is an advanced, state-of-the-art Supercar, designed and built within the rules of the series," said Mark Rushbrook, Global Director of Motorsport, Ford Performance.
"We are disappointed that we have had to make changes to the cars, however we respect the Supercars technical department and will comply."

Those changes have to do with the aero package at the rear of the cars, including making the rear wing end plates smaller, running a smaller and lower Gurney flap, and rejigging the
front undertray extension.
This is after another change which adjusted the centre of gravity after tests showed further disparities between the Mustang, Commodore and Altima.

What Mark Rushbrook from Ford Performance said was 100% true and accurate. The
Mustang IS an advanced, state-of-the-art Supercar, designed and built within the rules of the series. What the Mustang is not, is a touring car but a bespoke bit of kit.
Part of the problem is that the root IP for the Mustang Supercar is owned by DJR Team Penske, as the Ford homologation team. This is just one step down the road from Triple Eight Race Engineering who own the IP for the ZB Commodore, and two steps down the road from Kelly Racing who don't own the IP for the Altima but who had to modify an existing bodyshell which came off the production line. The Triple Eight built chassis were almost bespoke bits of kit but the sides of the cars at least started out as production line pieces. There is nothing whatsoever from the Mustang roadcar which goes into the production of the Mustang Supercar.
Irrespective of whether or not representative's from three competing manufacturers of vehicle, signed off on the Mustang for the 2019 competition, it still doesn't change the basic underlying fact that the Mustang is a purpose built bespoke race car which is near enough to be a prototype as makes no difference.
We are back at 1992 all over again.

The Supercars Championship is currently suffering from a crisis of its own manufacturing. After it knew that the death of the Australian motor industry was confirmed on 13th Dec 2013, it has deliberately made a series of decisions which might have made short term profits at the expense of the long term viability of the category.
Volvo and Mercedes-Benz both came and went after building a competitive vehicle in a category designed for dinosaurs proved too hard. Nissan have found limited success and thought quite rightly that their development money is better put towards the Class One merge of the DTM and Super GT. Holden practically held the category to ransom to get its ZB Commodore homologated. Now Ford have looked at the rules carefully and have built the best expression of those rules and smacked all and sundry to the weeds.
On top of that, the category chose to put itself behind a paywall at Fox Sports, runs a closed shop; to the point where we've now got only 24 entrants, has made a control chassis which is so cumbersome that no car in the world can fit with it, and it doesn't seem to offer the ability to run unbranded customer engines.

The Japan Auto Federation which runs Super GT, allows new teams to build a car as though it were a GT3 car but waves the FIA certification. It also provides new teams with both a 'mother chassis' and/or a debranded V8 engine that looks suspiciously like Nissan's VK45 but totally isn't (hint hint). This is in addition to running GT3 cars. Consequently, Super GT has all kinds of cars, including crazy bonkers things.
The Supercars could be like that if they wanted to be that way. It could be possible to allow someone to run Chevrolet V8 powered Kia Stingers if the category allowed it but somehow I don't think that they are willing to. They could open up the big races like Sandown and Bathurst to Super 2 and Super 3 cars provided they qualified within 107% but I don't think that they are willing to.
Instead we've got an argument over a new car which is very obviously better than enough everything else because the rulemakers allowed it to be and now they need to backpedal.
In addition to this, we have teams like DJR Penske and Walkinshaw Andretti eyeing off what kind of data that they can get in preparation for the Generation 7 set of rules in NASCAR where the Cup cars are possibly being downsized from 358cid to 306cid.

The really big dilemma facing Supercars is what they want to do with themselves. The question is who they want to be. This question has been answered by other motor racing series quite adequately.
NASCAR faced this in the 1980s and decided that it is a very tightly regulated spec formula. The DTM abandoned its touring car roots and became a prototype series in the 1990s. The JGTC evolved into Super GT and embraced diversity and crazy-go-nuts as a principle. The BTCC downsized all their cars in the early 1990s and did what Super did.
The way I see it, Supercars can either go down the route of being a prototype series like the DTM or the GT500 category of Super GT, or it can become a highly regulated spec series like NASCAR. My personal suggestion would be for the Supercars and NASCAR rules to converge into a Gen7/CoTF hybrid thing:

I honestly think that the solution should be to become a highly regulated spec series like NASCAR and adopt a standard set of templates, where only the front and back facias are cosmetically altered. If I was Grand Poohbah and Lord High Everything Else then I would allow the Mustang to stand as is and give concessions to the other marques. Mark Rushbrook's statement about the Mustang being a
state-of-the-art Supercar, designed and built within the rules of the series, is essentially correct. They looked at the rules and came up with the best solution and expression of them. If the people at Holden and Nissan or anyone else want to beat them, then they should build a better car.
... which is what Nissan did with their GT-R in 1989.
... which is what Ford did with their Sierra Cosworth in 1983.
Posted by Rollo at 07:17