I was asked by someone who I hadn't seen in a very long time about where I sit on the ABC's Vote Compass website.
For the record - here it is: 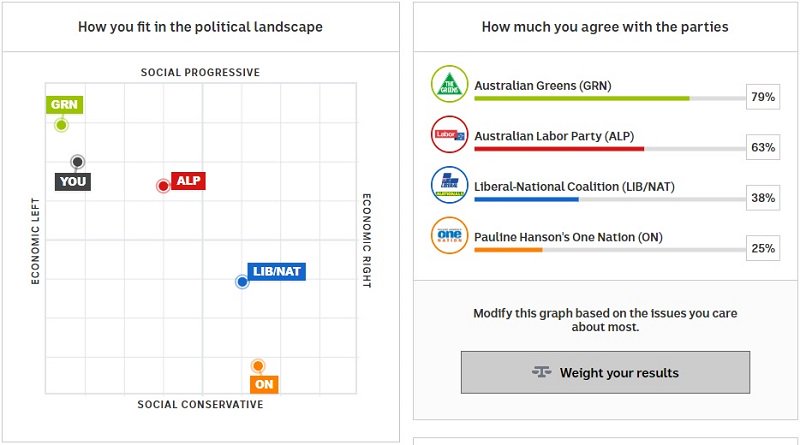 Of course as a long time obsessive of the dark arts of poltical science, I had taken the test and not surprisingly I ended up roughly where I thought I would. My poltical home is on the economic left and I'm almost deliciously ambivalent about the cultural scale. What I find curious is why the ABC thinks that I run to the right of the Greens economically.

The ABC Vote Compass can be found here: https://votecompass.abc.net.au
This is rather like an existing website called The Political Compass, except that the cultural scale is upside down: https://www.politicalcompass.org/test
On that website, I end up as -10.00 and -2.56 which is as economically left as possible but still north of the greens on the cultural scale¹.

I have always been the most leftist person that I know for as long as I can remember. I think that that's as a result of the study of economics and spending far too long thinking about how and what the state is for and how and what it can do. That is tempered by my base assumption about the world that people are horrible and the very long history of evidence which says that the same kinds of people will be horrible irrespective of whether they work for the state or private enterprise. Actual governance has to do with the exercise of power and horrible people are always drawn towards it.

The biggest reason for my liking of the state as a thing, is that it is ultimately answerable to the people. The British Member of Parliament for Bristol South East, Tony Benn (and who is my political hero) had five questions to ask of power.
1. What Power Have You Got?
2. Where Did You Get It From?
3. In Whose Interests Do You Exercise It?
4. To Whom Are You Accountable?
5. How Can We Get Rid Of You?

Only a democracy gives us the right to ask those questions and act in the proper exercise in answering the last two questions. Australians go to the polls on May 18; and all indications seem to indicate that the people of Australia are probably going to answer Question 5 quite emphatically. That is a really scary prospect if you are actually answerable to the people because they might get rid of you. It also means that the state which has the responsibility of governing the nation, also has both the ability and responsibility to show to show familial kindness to the cititzenry of the nation. Of course the power of the state always has to be reminded that people are rational actors who should have the right to self determination.
Corporations on the other hand have responsibility to show to show familial kindness to the cititzenry of the nation and unless they are forced to by law, they do not. That's not to say that private enterprise is terrible though, as most technology, food, consumer goods, durable goods are made by the private sector and there is a lot to be said for the power of the profit motive to push development along.
To that end I think that the domains of government and the private sector should leave well alone. I don't think that either of them do a particularly good job at providing the goods and services that the other is eminently suited to.

The state as an economic entity has the distinct advantage of being able to borrow money at lower rates interest because it has a lower risk of collapse. The existential risk of the complete malfunction of the state is far far lower than corporations and individuals; as a result sovereign risk must almost always be lower. It follows then that governments who can borrow money at lower rates of interest, are better poised to be able to deliver very big ticket items. Very big ticket items also tend to be the things that we expect as a society to be available to explain everyone without fear or favour.

Those things include:
Hospitals, Schools, Universities, Roads, Railways, Telephony, Internet, Water, Gas, Electric, Police, Judiciary, Gaols, Regulatory Oversight, Parks, National Parks, Defence, Transfer Payments, and the ownership of the necessary assets to be able to deliver these things.
I will go on to say that I abhor any and all privatisation in any of these things. The only reason that the private sector wants to provide these things is to either spin a profit (which is the prime reason of existence for every corporation ever) and/or because the people who provide these things deliberately want to exclude people of lesser economic means from getting them. I don't budge on this as a position.

On the other hand, governments are generally ill-advised and incompetent at delivering things which the private sector is very obviously suited to. Where is the border of those two domains? I think that it generally has to do with with the optimal sharing group of the items.
Governments can do things like make consumer and durable goods but they almost always shouldn't. Government has in the past produced white goods, cars and food to some reasonable standards but they tend not to have an extremely close up view of the world, which is where the minutea of private business excels. People will point to Soviet Communism as proof of some imagined evil but the actual quality of a car like a ZaZ or an East German Praktika camera, was easily as good as the equivalent in the west. What the Soviets never really understood is that people like the unnecessary quality of luxury and if the market has a gap in which a profit can be spun, the private sector is incentivised to produce the thing.

Most things that Renton in Trainspotting mentioned is something that private enterprise excels at producing.
Jobs, Career, big televisions, washing machines, cars, compact disc players, electrical tin openers, fixed-interest mortgage repayments, leisure wear and matching luggage, three piece suite on hire purchase in a range of fabrics, DIY, mind-numbing spirit-crushing game shows, junk food, heroin.
That also goes for the production of entertainment; which is where we move into a very grey area.
There are some things which private enterprise is perfectly capable of doing but refuses to. There are also some things which both the state and the private sector are capable of producing and should both produce.
In this category I put:
Art Galleries, The Performing Arts, Public Broadcasting, Sporting Grounds, Public Housing.
There is a good argument to be made both ways for both the public and private sectors to provide various components of these things as part of the ongoing cultural life of the nation.

On most standard political science tests, I come out massively on the left because I advocate hard boundaries of what government should own and operate. In the 40 years that I have been alive, the Anglosphere has generally moved to the right; while I as a student of history, politics, and economics, look back over the past 300 years or so and have arrived at my position after seeing what did and didn't work and why.
I will close this section with my assertion that the greatest drivers of human happiness in the history of economics have been the provision of public sanitation and waste water services, and mass literacy. Not dying of cholera and dysentery is an exceptional outcome, and being able to read and write has untold multipliers on happiness and productivity.

I have far less to say about the cultural scale because I mostly don't care about it. I find discussions which are complex, and which relate to things which can't not be generally measured, to be more about deliberative processes than about outcomes.
So much within the cultural scale has to do with the tension that people should generally be free to do whatever they like but that everyone is also a selfish dingus (including myself). The whole Authoritarian/Libertarian scale is to do with what chains we should place upon the beast that shouts "I" at the heart of the world.

Most people will generally agree that we should be able to do whatever we like provided that it doesn't interfere with the liberty of someone else. Not taking things which don't belong to you, is a good principle. I reject the absoluteness of the Harm Principle of John Stuart Mill which says that the only purpose for which power can be rightfully exercised over any member of a civilized community, against their will, is to prevent harm to others; because quite frankly the authority vested in the state is a collective and familial one. I also reject the notion that someone's own good, either physical or moral, is not a sufficient warrant for the state to act because it might very well be. I am well aware of my own internal conflicts with utilitarianism here.

The biggest conflicts which exist on the cultural scale have to do with the discussion of the sacred (such as marriage and abortion), and the imposition of people's expression over each other. I think that there should be remedy for injury; which means that I quite like pieces of legislation such as the Sex Discrimination and Racial Discrimination Acts but as for the issues where the state has some vested interest in the sacred, then that's a collective decision and I would prefer to step out of the way and accept the prevailing rules of society. Of course I do that knowing full well that as a straight white male, I have an incredible amount of historic unstated power; so I am fully aware of my own rank hypocrisy here.
I like everyone else am a mass of contradictions, political hypocrisies and inconsistencies. I suggest that this is part of the human condition. The biggest questions for me in the political realm though are "Have you made people's lives better?", "Have you been kind?" and I find that I can confuse both the left and the right of politics with those questions.