Although I live way out in the bogan western suburbs of Sydney, almost smack dab in the middle of the great Cumberland Plain, I go to work in the very posh seaside suburb of Mosman. Mosman which is a one suburb local council area, has on its crest a whale and the motto in Latin of 'Tutus In Undis' which I always want to read as 'Tutus In Undies' and imagine a bunch of plumbers dancing the light fandango in a Tchaikovsky ballet.
Except for one border on the western side with Cremorne, Mosman shares no land borders with any other suburb and precisely because it is almost completely surrounded by water, the property prices are an order of magnitude larger than where I live.
From where I work, I do not have to travel very far to look at the sea. However, I do not really have that much of a desire to come here at the weekend to visit the seaside. Some people are prepared to spend that order of magnitude of money just to procure a seaside view but even if I had that kind of money, I fail to see the point. The sea is on occasion pretty but I do not necessarily need to want to live near it, nor look at it; which I will freely admit, does fill some people with joy. 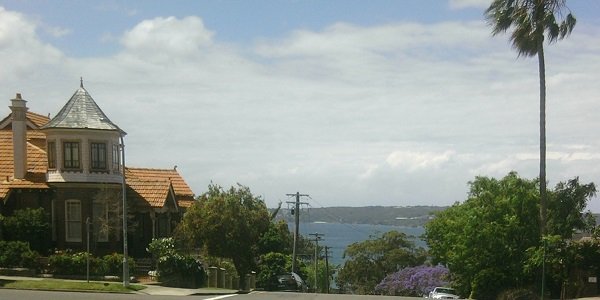 I have quite a healthy respect for the sea. As long as it doesn't decide to come into my living room, I promise not to go into its living space. As a big blue wobbly thing what sharks and fish live in, the sea does a very good job at doing its thing. I don't really want to intrude on a master at work. The sea can be the sea and I promise not to venture into it.

Mind you, it is rather impossible for me to venture that far into the sea through choice; seeing as how I can not swim. People often seem shocked and dismayed at how I at the age of 40 can not swim but equally I can not do surgery, program a supercomputer, weld copper piping, nor can I cook a soufflé. I don't really have any desire to do these things either but nobody ever questions that.
My strategy should I accidentally fall into the sea, which I only can imagine would happen if I fell in after an aeroplane crashed into it or a ferry or cruise ship sank, would be to cross my arms and embrace death's icy grip due to drowning. That seems like a perfectly logical set of circumstances anyway because the conditions which would have brought it about, would have already been tragic to begin with. If I had been in a plane crash in the middle of the Pacific Ocean, then my chances of survival were minimal to begin with.
The sea which already does a great job of looking pretty, should be respected in doing its job; so I am perfectly happy to look at it but venture no further. I will let the pretty looking thing remain pretty by not going in it.

I remember going camping on many occasions in my youth and some of them included staying at campsites near beaches. For most Australians, the beach is this almost mythical place; which helps to define us as a country. For me though, the beach was and still is like a strange environmental torture device. Not only does that big blue wobbly thing and a number of the creatures who live it want to kill you but the sun in summer which is about three quarters of a mile, teams up with the sand to give you ten thousand tiny stabbings.
Leave me back at the pavilion or the barbecues in the park. I am happy to be engrossed in the minutiae of an overly complex plot and characters that are badly constructed of some poorly written novel and eat ice cream; rather than be next to the sea. Even as a kid, the sea and the seaside held less than nothing of import for me.
Posted by Rollo at 07:17