As far as anniversaries go, this weekend has a surfeit of them.

It is the breaking one of the most charismatic walls which takes centre stage tomorrow; which completely overshadows the opening of the checkpoints up and down the internal German border.
30 years ago today, in 1989, the Berlin Wall was opened almost by accident. There were a series of confused messages which were sent through various DDR Government departments; which resulted in the official announcement at about 8pm in the evening.
Places like YouTube are full of footage of the event; so it is rather well documented but what I find somewhat amazing is that people are actually remarkably ignorant, about the geography of the place, even though they may have been there.
We had a client remark just yesterday that he couldn't understand why the people of East Berlin couldn't just go around the wall; even though he'd actually been to Berlin.

Here is the roughest of rough summaries to explain why it all melted like someone leaving cake out in the rain.
When the allies divided up occupied Germany immediately after the Second World War, the British, French and Americans were all on the left side of the map and the Soviets were on the right side of the map. Berlin was way over and deep on the right side of the map; so it was technically an exclave of West Germany which was completely surrounded by East Germany.
After the Cuban Missile Crisis, Kennedy's "I am a donut" speech¹, and loads of paranoia, the DDR started putting up borders and walls, mostly to keep their own citizenry inside rather than keeping people out. As far as I can tell, almost all of the walls and border construction was done by the communist east. This is about penning in Ossis rather than keeping out Wessis.

That is why asking why the people of East Germany couldn't just go around the wall such an odd question. They could literally go around the Berlin Wall if they wanted to. In fact, they could go all the way around and come back to where they started if they wanted to. Furthermore, they could take a U-Bahn train under the wall and under West Berlin and come back up again. It's just that they couldn't get out at any of the so-called 'ghost stations'.
If Ossis had gone over the Berlin Wall, then they would have been inside it and the only way out would have been by aeroplane. 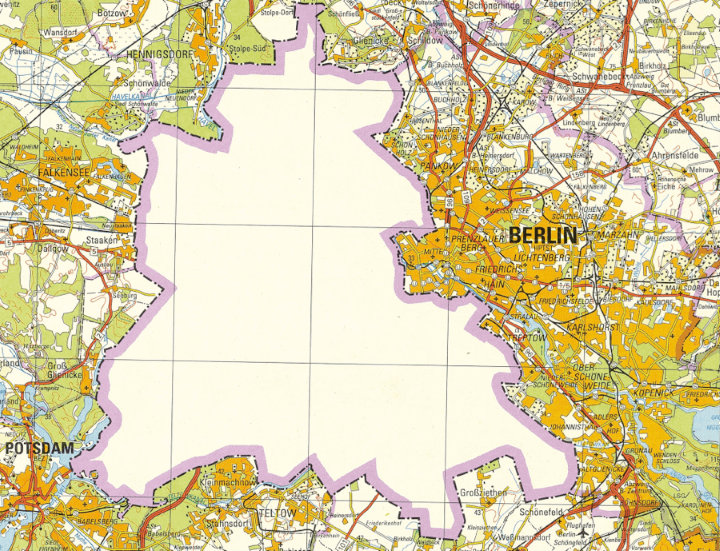 Events like Able Archer which was a NATO exercise in 1982 scared the DDR because they weren't aware that the messages that they were intercepting were nothing more than war games.
Movements like Soldarnosc and the relaxing of borders in Poland, Czechoslovakia and Hungary, which all happened in 1989, sent officials way down the chain of command into a kind of confusion; so when the 9th of November did roll around and not even the government knew what was going on, nobody else could be expected to.

We are now 30 years away from that evening and 29 years away from German reunification. An entire generation of people literally has no memory of the DDR and they have started to have children of their own.
It is little wonder that people who have no memory because they weren't alive at the time, can only put events like that into the context of a modern history book. If would be like me trying to tell you about the events of 1948 and the splitting up of Germany in the first place.

As for the idea of the Berlin Wall itself, people tend to forget that it wasn't exactly one wall but a series of paired walls in most locations (and even some stretches where 'the wall' was actually a river), that originally started out as just a series of barbed wire installations. The walls got progressively higher and more heavily guarded but what they mainly served to do was ideologically hide the East from the West.
It must be said that actually of all the countries on the dismal side of the Iron Curtain, East Germany had it the best and was actually more progressive than the West in dealing with matters of both socio economic and gender equality. People of East Germany had televisions and washing machines and the coming down of the wall was semi akin to a kind of invasion by the West as perfectly normal industries were forced to close as a result of the reunification process.
The people of the East weren't completely ignorant of the West and as many as 600,000 people crossed the German borders as refugees. Officially only 80 people died in actual crossings of the Berlin Wall but that figure is almost certainly very hokey.

The 9th of November 1989 quite rightly deserves its place in history because the pictures are dramatic as the spectators became the spectacle, and although the whole Eastern Bloc had already started to crumble, this is the point where the physical manifestation of President Ronald Reagan's demands to Mikhail Gorbachev (who wasn't even East German) to 'tear down this wall' was made².
It kind of marks some sort of ideological victory of western liberal democracies over the command nature of soviet style socialsm; which played out nicely considering that this was framed as the Cold War.
As far as I was concerned as an 11 year old watching this play out on my birthday³, I had very little conception of what any of this meant other than that there wouldn't be two Germanys any more. I actually remember the events of the 22nd of October 1989 far more intensely as Senna and Prost came together in the Japanese Grand Prix. Equally, the importance of a united Germany winning the World Cup at Italia '90 wasn't lost on me, nor was the fact that the Soviet Union was in the middle of falling over; which is what the wall was doing.

Aside 1:
I naturally want to draw a parallel to an imagined future where the North Korean authorities open up the border to the South. In that case, there is no way around the border and so that's more like the old German internal border. I can imagine North Korean officials being incompetent and the government also being incompetent; which will lead to that border dissolving as well. Remember, it only took 11 months from the borders being opened to the old DDR ceasing to be.

Aside 2:
What I also love about this being the 30th anniversary of the Berlin Wall being opened is that the power of the memory of Kristallnacht is being destroyed. There might be the proverb that "those who do not remember the past are condemned to repeat it" but equally if the past is defamed then not celebrating it can only be a good thing. The Berlin Wall coming down represents the beginning of the process of unity.
I draw this in relation to Australia Day because I think that if we simply abandon it, then it is stripped of its symbolism. The past would still exist and there are still lessons but there is no need to glorify knavery.