Horse 2629 - The Great Cheque Swap And The Toxicity Of Nostalgia

One of the best opening lines in literature comes from L.P. Hartley's 1953 novel 'The Go-Between'. I think that it is a steaming, cloying, wreck of a work, which might very well be a satire on that most toxic of impulses: nostalgia. I think that it tries to imagine a world which never was, and does so through a frame which itself, isn't real. That opening line is:

The past is a foreign country; they do things differently there.

Allow me to mine my own nostalgia, for a world which was but might not be any more.

Long ago in the swirling mists of time, when Mr Howard was Prime Minister, and people thought that playing Snake on their Nokia 5110 was pretty neat, one of the very first jobs that I had was working as a teller at St George. After passing the exam and being trained at head office in Kogarah, I was then sent to the branch at Bondi Junction. The manager of the branch, was a lady who took an instant dislike to me because she was expecting to get a girl; so my life was made a living nightmare. It was like working at the Sheol branch of St George. I was there for two weeks and then dismissed; with no explanation at all and no reference.
As a 19 year old idiot with dreams which had not yet been broken, I then applied for a job at the Commonwealth Bank and got the job almost instantly because by coincidence, the person who was doing the hiring, had seen me behind the counter at St George, in that previous fortnight.

Rather than being employed at front of house, I was sent to the Liverpool Street operations centre and given a job in Cheque Acceptance. At the time, the Liverpool Street operations centre was officially a branch and had its own BSB number but it was purely an internal branch and had no external customers.
The biggest assets of that particular branch were these massive cheque readers; which could read thousands of cheques in an hour and sort them into batches, so that they could all be returned to their respective issuing banks and branches. The job of actually checking cheques for legitimacy is firstly done by a person at a normal branch and so a lot of the screening was already done for us. A lot of our work had to do with the cheques which had been flagged for investigation, on suspicion of being either fraudulent, irregular, or were just very large amounts.

The internet in the late 1990s was not the high speed marvel that it is today. In those days, if you wanted to download anything it would take several hours, and if you wanted to pay for anything 'online' you had use your credit card; provided that you trusted the person at the other end of the transaction with your very insecure details. As such, the backbone of the credit card network was still merchant paperwork and bank cheques flying around.
All of this meant that the sheer number of cheques that were being written was probably magnitudes larger than today, and that the process for dealing with them had to be different.

A cheque is an instruction to pay someone a sum specified from a bank account. There are all kinds of rules with regards whether or not that sum specified can be paid in cash, or whether or not the cheque can be on endorsed to pay someone else, or ever whether it must be paid into a bank account. In all cases, a cheque has to be returned to the issuing branch for verification purposes; which is still the nominal reason why it takes three days to clear the funds.
Getting a cheque back to the issuing branch, is itself an exercise in logistics.

At about 04:30pm every day a very big ceremonial toggle switch, like the sort of thing that you might see the villain of a schlocky movie or pantomime switch, would be flipped to the off position and all of the cheques which had been sorted into various bins would be all collated and then packed into B4 area Tupperware containers, and then packed into suitcases which must have been in use since the 1950s. If you can imagine thick wads of cheques, packed into four containers per suitcase, and as many as 20 suitcases coming from the very big branches, then that's an awful lot of cheques.
If you can imagine 80 suitcases for each of the big four banks, and then another 10 for the rest of the banking establishment; then multiply that by 4, then that means that the City of Sydney was generating something in the order of 360 suitcases full of cheques per day, every day. It is little wonder that the banking system was so intent on banking 'customers' becoming our own tellers at home with the advent of internet banking. 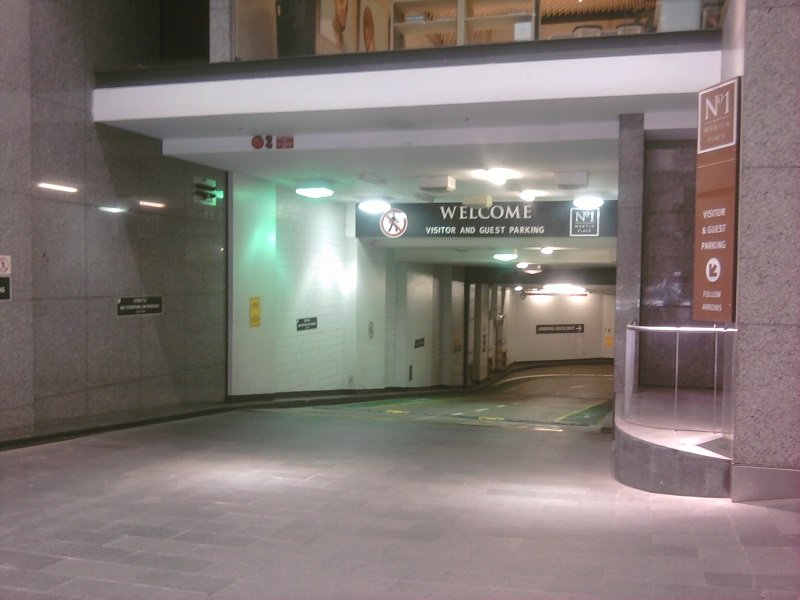 At about 5pm, a swarm of stationwagons would descend upon the underground car park at the GPO in Sydney, where they'd all park with their tailgates up, and the great cheque swap would begin.
Suitcases would travel to their respective destinations en masse and within about 20 minutes, the whole box and dice would be packed away and everyone would leave. I imagine that if you had been a particularly observant but stupid thief, then you might consider stealing one of those stationwagons but would be then highly disappointed as there was no cash and just a load of instructions to pay, in the boot. 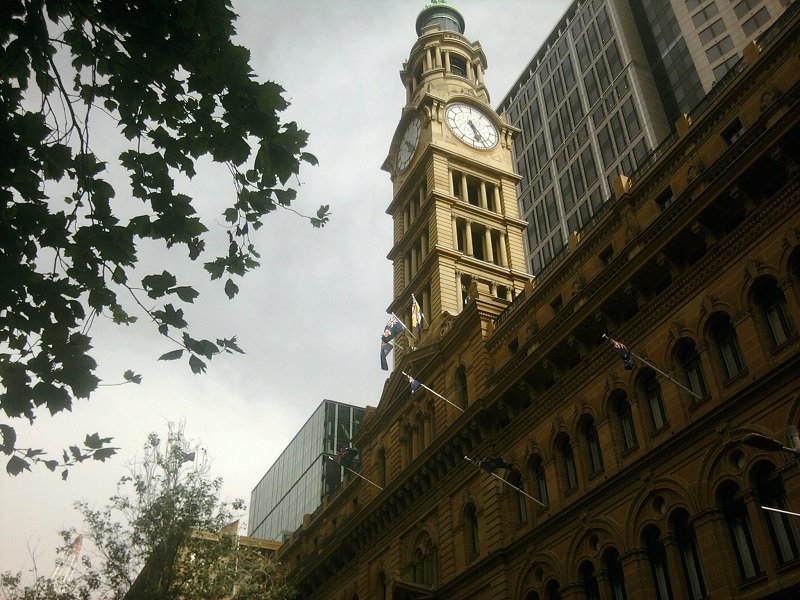 This whole entire scenario does not happen any more; or if it does, then I have no idea where. The GPO building no longer serves as the General Post Office and is instead a hotel. I thought about going underground to the carpark but very quickly realised that this would be trespassing and trying to explain myself would be seen as very highly suspicious.
I also imagine that the volume of cheques has probably fallen off a cliff by now. Writing a cheque was seen as so valuable a skill that I remember doing it in a high school Commerce class but I doubt that would happen anymore. There has been talk of abandoning cheques altogether but I guess that the banks still see the business of confused old people as sufficiently valuable enough to warrant their continued existence. 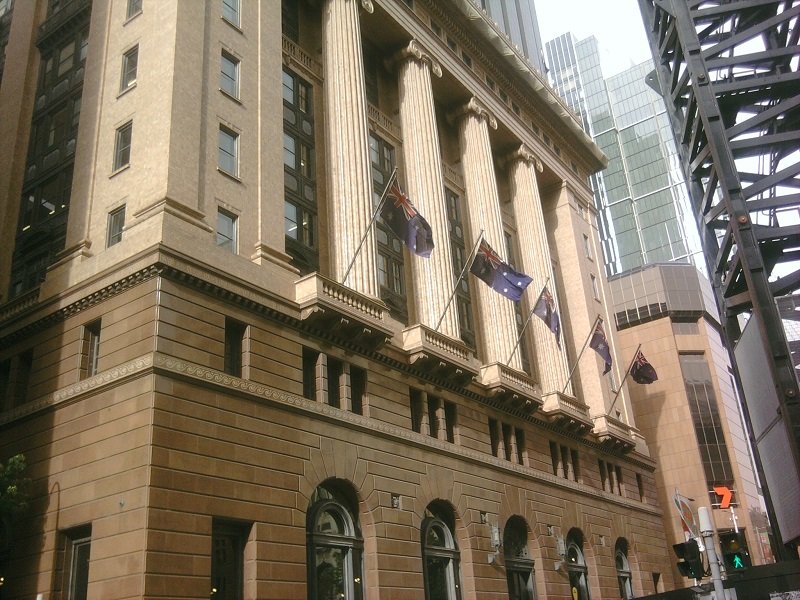 I was also reminded of just how toxic the impulse of nostalgia is. As I was looking back at the Money Box bank, I pondered that before 1959, this was also the central bank of Australia. I also pondered that since it was privatised, the people of Australia have been cheated out of more than a quarter of a trillion dollars in lost dividends. In fact, Martin Place is full stuff that we used to own but don't anymore.
What used to be the Trading Bank on Pitt Street is now inhabited by a series of retail shops, as is indeed the majority of the outward facing floor space of the GPO, which has been further stripped of its former glory by being given the almost humiliating moniker of No.1 Martin Place.
Even 48 Martin Place has been violated; with Macquarie Bank taking over part of the floor space. It sounds really daft to lament the invasion of floor space of a private bank, with another private bank but once upon a time, we the Commonwealth of Australia owned and operated that space.
I do not however lament the gradual passing of cheques into irrelevancy. Cash is still the fastest way to transfer money from one person to another, EFTPOS and the credit card system and internet banking runs a close second, but relying on bits of paper which take several days to verify and clear is all a bit twee.

Aside:
Check vs Cheque
Check is the older form of the word in English; which is still retained in the United States. English English changed after the time of the 'Practical Treatise on Banking' published by James William Gilbart in 1828, when he suggested adopting the French spelling as a practical way of distinguishing the two words.
Her Majesty's Chancellor of the Exchequer is literally the ceremonial head of the office that writes the cheques.
Posted by Rollo at 07:17