The man who could start a fist fight in an empty room, Kyle Busch, won his second NASCAR championship this month¹. His car, which carried the M&M's livery (the apostrophe is a possessive in this case), invariably led to a joke being posted on a motorsport forum I like:

How do you keep an idiot amused for hours?
Tell them to arrange a packet of M&M's alphabetically.

If you are prepared to lay the fact that this joke is unfunny aside, it poses the obvious challenge of doing precisely that: alphabetically arranging the chocolate bits (and as a bonus, arranging them by colour).

This poses three obvious questions:
1. Aren't they all M? No. Depending on the orientation, they will fall out of the bag as either a 3, E, M, or W.
2. Aren't you red-green colourblind? Yes I am. Thanks for asking.
3. What's the point? There isn't really any. This is a frivolous exercise.

When you pour out the packet of M&M's out onto the desk, some of them are label up and some are label down. I feel like the process of knolling these things and sorting them out, is like bringing order out of chaos.

If you were to just open the packed and let the bits spill onto the floor then ironically, that is actually a good way to stap a vampire.
Legend has it that if you are being chased by a vampire, then your best defence is to throw a handful of rice on the ground because all vampires have arithromania; which is a compulsive need to count things². I also have an extreme fear of being stabbed through the heart with a giant metal stake.
That may explain why I work in an accounting firm; both due to some hidden desire to count things and to work in a sufficiently safe workplace where accidental stabbing through the heart by giant metal stakes is not likely. One of the things which suggests that I am not part vampire, is that I have no desire to count the bits³. Truth be told, vampires are more likely to be found in fields like astronomy where they can work in the dark, or perhaps in a mail room for a very big corporation where they can also work in the dark.
I know that this is a massive aside but if you were to take two jars, one full of 50 black beans and one full of 50 white beans, then by operation of coin toss move one bean from one jar to the other while alternating which jar you do this for, then in the long run and it doesn't seem to matter if you add other rules and constraints, the two jars will over the long run tend towards 45-55 of both coloured beans in both jars. Unless you are prepared to take those end conditions as somehow 'ordered', then this is a practical display that entropy in a closed system always increases until completion.
I say that knolling the chocolate bits is like bringing order out of chaos, when I actual fact, I should have said that it is exactly bringing order out of chaos.

There is a a story which says that supposedly M&M's were invented during World War 2 because the US Army wanted to give the troops a chocolate ration that wouldn't melt.
The truth appears to be exactly the opposite because it seems that Frank Mars (one of the Ms) copied the the idea from Rowntree's Smarties; after he heard of soldiers in the Spanish Civil War eating them. He subsequently set up M&M Limited with Bruce Murrie of Hershey; hence the reason why they are M&M's. Also, according to the Mars Company website, M&M's were first introduced to the public on 10th Sep 1941 and unless they had the ability to see into the future, the story must be fraudulent as the United States didn't enter World War 2 until 7th Dec 1941; which FDR called a "date which will live in infamy".

I suppose that in my ignorance, I wasn't aware that there were six colours of M&M's: Blue, Yellow, Brown, Orange, Red, and Green. I can report that I had real difficulty trying to work out the difference between the red and the green ones. Since I am red-green colourblind and I have no frame of reference to work out which ones are which, this section of the task was impossible. I will admit though, that had I been around in World War 2, I would have been extremely useful as a navigator and spotter in the Air Force, as attempts at camouflage don't work nearly as well on me as they do for normal people. If I had been in the Air Force though, I wouldn't have needed to worry about M&M's though because by all accounts, a Lancaster bomber flying over Germany would have been freezing and on top of that, the castor oil which was still being used as an engine lubricant, sent so many oily fumes through the cabin that crews suffered from diarrhea. 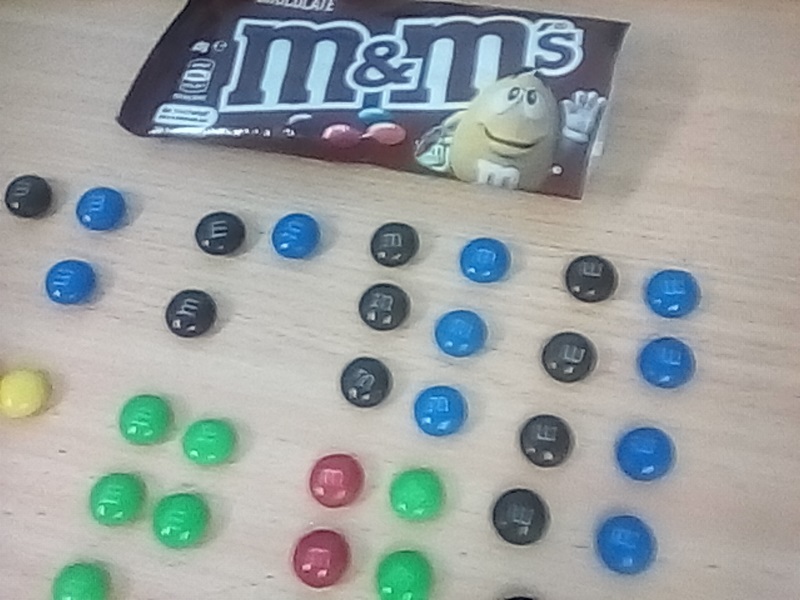 After all is said and done, I was kept amused amused for hours because I arranged a packet of M&M's alphabetically. Thus the joke which was unfunny, actually became a truism and thus, even more unfunny. This could be a case that when a joke is exploded in an example of gestaltzerfall, it starts to take on a sense of semantic satiation.

It was EB White, the author of 'Charlottle's Web' who put this the best:

“Explaining a joke is like dissecting a frog. You understand it better but the frog dies in the process.”

¹https://www.youtube.com/watch?v=i17a-IwzMSY
²Which is why Count von Count on Sesame Street loves to count things. He is part of a great literary tradition. It does however pose the other problem that as a vampire, he probably also has the need to feast upon the blood of virgins (see Dracular (1897)).
³I have no idea what the singular of one of the things in a packet of M&M's is.
Posted by Rollo at 07:17

Hello everyone feel free to reach out to Mrs Patricia Morgan on (patriciamorgan984@gmail .com ) if you need help or guidance on how to recover your lost fund using good strategy and how profitable trades is been done. And also if you want to recover your lost funds using his masterclass strategy she can help you. I'm earning $11,500 weekly using Are masterclass.. you can also reach him out on whats-app +1 631 633 3388.