I am informed by Mrs Rollo that in America which is the undisputed champion of celebrating holidays, that the term 'Happy Holidays' is an all inclusive one which encompasses Halloween, Thanksgiving, Christmas, Chanukah, Kwanzaa and even New Year's Day. Quite frankly I think that that is ace. What a top idea. I love this as a concept because as someone who belongs to the Association For The Perpetually Bewildered¹, it doesn't require as much brain power to think about.
In Australia though, Halloween is only really a thing because Woolworths and Coles want to sell lollies and chocolate, Thanksgiving is not a thing at all, and Chanukah and Kwanzaa are so small as to be not at all visible.

This means that without Halloween and Thanksgiving being in the way, marketing for Christmas begins as early as possible; sometimes as early as September in some shops.
As businesses in Australia (just like any other profit driven institution) are looking to spin a dollar in any way possible, we end up with marketing campaigns which are culturally nonsensical.
One such business is Starbucks, which is a Seattle founded company and which takes its marketing cues from head office.

Halloween is already a weird thing in Australia. In Sydney, the sun sets at about 10 past 7 in the evening; with astronomical twilight not ending until after 9 o'clock. It is really hard for the little goblins and ghouls that are walking around to look remotely scary, in broad daylight.
Starbucks, which wants to go all in on Halloween, brought their famed pumpkin spice latte to Australia, despite us having no real cultural roadmap to work out where this fits.
I am reliably informed that for Thanksgiving, which isn't actually a thing in Australia, that Starbucks has some kind of turkey spice cloves thing. I lack the ability to comprehend why this exists. This week though, I note that even the Australian Starbucks stores also have no idea what to do with the marketing push from head office.

As the phrase "Happy Holidays" doesn't really exist in Australia because two of them don't really make any cultural sense, Starbucks has decided to extend it's Christmas propaganda into mid-November and has come up with the following: 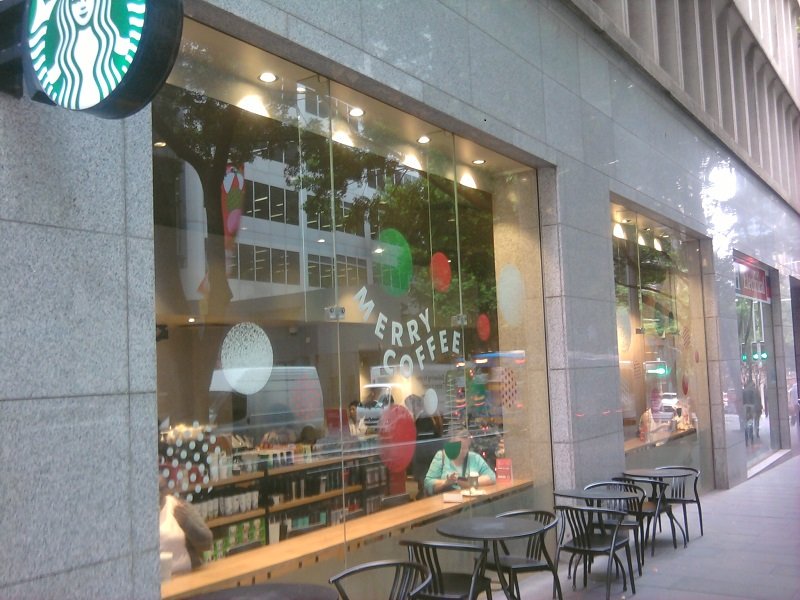 I pass this corner while on, the bus at least five times a week. Admittedly I have no reason to go to Starbucks and so I am not very likely to verify if this is a claim that they either sell merry coffee or that their coffee is going to make you merry but if nothing else, it does avoid the whole cultural holiday existence problem.
I expect that there will probably be a member of the 'taking Christ out of Christmas' crowd who will object to this but this goes one step beyond and takes the whole entire of Christmas out of Christmas. I think that that's fair as Starbucks already takes the coffee out of coffee.

This is many steps better than the confected holiday trend, where it's National Cupcake Day, or Beef Appreciation Day (and there's probably some marketing company inventing these things, somewhere) because Happy Coffee is so incredibly vague, there doesn't actually need to be a holiday. Presumably, every day can be Merry Coffee?
Probably not. There aren't really very many holidays which are associated with the word 'merry'. Merry Australia Day? Nope. Merry Easter? No. Merry ANZAC Day?No. Merry Thanksgiving and Merry Halloween also do not sound like they fit. Christmas has an unwritten almost monopoly on being 'merry', though I do not doubt that merriment is occuring at other times of the year. I say almost monopoly as Merry Unbirthday is completely acceptable; which coincidentally also features something that you might find at Starbucks (tea).

The graphics for this propaganda² (of trees and baubels) are so very obviously for the holiday that is not being named, that this is probably as close as Starbucks thinks that it can get without offending anyone. That suggests to me that if this is part of some worldwide directive, then they have thought of the possiblity that they are selling coffee in countries where Christmas doesn't exist.
Starbucks in Pakistan, can run an equally holiday agnostic campaign without offending Muslim folk. Starbucks in Japan, where Christmas is a thing³ albeit one which exists almost purely for sales purposes, can equally run this holiday agnostic campaign without offending Shintoists and Buddhists.
What I find really baffling though, is why Starbucks thinks that we in Australia would take offence to the phrase 'Merry Christmas' and why they think that they need to Bowdlerise it.

Who exactly do Starbucks think would be offended? Is it the Christians who they think are going to be offended at the commercialisation of Christmas? Is it the evangelistic atheists who want all shred of any mention of Christianity removed from public spaces?
We are a country that has Nativity scenes in shopping centres, and where the Mayor of Sydney was lambasted for not wanting to put up a Christmas Tree. I don't understand why Starbucks feels the need to not say 'Merry Christmas' at all.
I do not think that Starbucks cares enough about Christmas beyond whether or not they can sell coffee. Someone in the marketing department has thought that this is a good idea and nobody else has questioned it. I am personally not offended by then removing Christmas from Christmas but I am confused. There isn't even a good pun here; they could have gone with 'Berry Christmas' or 'Merry Bacon and Xmas', or anything with basic wordplay. 'Merry Coffee' is just plain daft.

¹Membership costs one peppercorn, a ball of string, a potato, and $49/yr. Why? Who knows?
²The first cut won't hurt at all.
The second only makes you wonder.
The third cut will pull you under.
You start bleeding; I start screaming.
³KFC in Japan sells elaborate Christmas Sets which also include champagne. - https://order.kfc.jp/menu/event-menu/party-barrel