Horse 2621 - A Drink Of Empires, Of Revolution, And Bathtubs

For a brief period of time which I very much suspect was related to taxation rates, the City of London went through what has become known as 'The Gin Craze'. I think that the period ended when taxation rates changed and the people of London discovered coffee; which is why the first golden age of journalism took off in 1720s. Parliament eventually reacted to The Gin Craze and passed no less than five major Acts, in 1729, 1736, 1743, 1747 and 1751. In a roundabout way, the ending of the Gin Craze through taxation and a kind of crackdown on alcohol, was one of the causes which eventually led to the American Revolution as well.

I like gin. Gin feels to me to be more of a lazy jazz summery drink than say the warm, sitting with a cat by the fire with a curious volume of forgotten lore like whiskey, or the overtones of calypso and cricket that rum has. I think that that is why it was the preferred spirit of the British Raj in India; that and that it pairs with Tonic Water so well as a way of avoiding malaria (though I have no idea how effective that was, if at all).

I was watching a documentary history of NASCAR racing of all things; which lent a fair amount of credibility to the myth that it grew out of a culture of people building hotted up cars during the era of prohibition in the United States and lots of returned servicemen with mechanical skills who came back from World War Two. I am still not necessarily inclined to believe a lot of the myth because while I concede that bootleggers did exist, prohibition ended in 1933, the war ended in 1945 and NASCAR began in 1949.
All that aside, one of the things that they were running were moonshine which is a fancy way of saying an unknown and definitely not quality controlled alcohol, and so-called 'bathtub gin' which is made from said moonshine. I got curious and wanted to know what the rules are for making bathtub gin. Without further adieu, I now present those rules.

I could not find anything to suggest that there are any other rules at all, for making gin¹. Neither in the literature of the early eighteenth century, nor in connection with India, nor in anything to do with mid twentieth century moonshine running.
There isn't the equivalent of the German purity laws which describe beer, for making gin; and there isn't as far as I can tell an association of gin makers. The only hard and fast rule that I could find is that gin must contain juniper berries; which makes sense considering that its name is also derived from that same berry.

I found several descriptions on the internet for making gin and determined that it was so simple that even I could do it.
The method for making gin is remarkably similar to making a cup of tea. If you want to make your own bathtub gin, you will need a neutral spirit (of which vodka is the most neutral), juniper berries (dried or fresh), and anything else that you might like to add. Sloe Gin is made by adding sloes, Rangpur Gin is made by adding the juice and rind from Rangpur Oranges, so I suppose that any berry or cherry will do, and you can even add herbs and spices, which would give it more of a taste like Swedish glögg.
We added dried junipers which I found in the spice aisle of the supermarket, mandarin peels, cardemom. We then cut the mandarin peels into tiny bits, and crushed all of the fruits and spices with a mortar and pestle, before adding the crushed pulp/bits to the bottle of vodka. We then allowed it to steep for three days before shaking it up and allowing it to settle for a further three days. 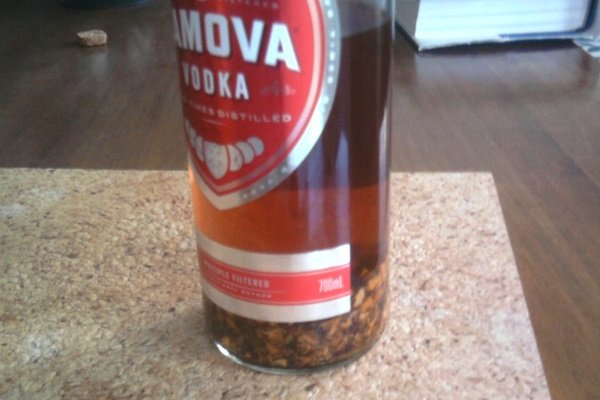 The result is the singularly best gin that both Mrs Rollo and I have had in the history of ever. Not only is it better than commercial gin but because it is made from a bottle of Aldi own-brand vodka, it is also cheaper by almost 40%. It is so brilliant that I don't think that we ever need to buy name brand gin ever again (except maybe for sloe gin because sloes are ridiculously hard to find in the shops).

If this was a commercial gin, the next step would be to further distill the liquid so that the colour and the bits didn't come through. I don't mind the colour and the bits can be strained out with a tea strainer. I think that because all of the junipers and bits have always been in the bottle, that this gin actually becomes ginnier as time passes.

¹Though there are considerable rules in the EU to describe legally what it is:
https://eur-lex.europa.eu/legal-content/EN/ALL/?uri=CELEX:32008R0110